A Pictorial History Of The Australian Infantry Battalion A. I. F VERY RARE 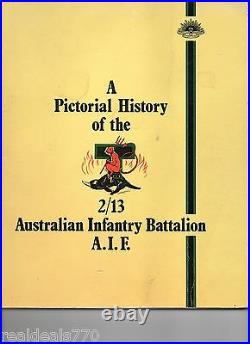 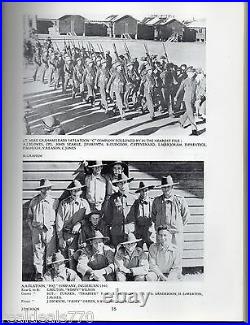 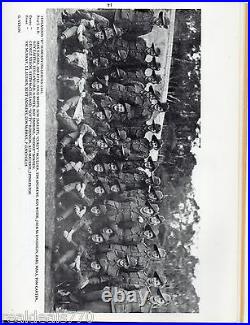 A Pictorial History Of The Australian Infantry Battalion A. F - VERY RARE BOOK. Softcover (minor creases on cover). Lots of Black and White photos of the 2/3 Battalion. The 2/13th Infantry Battalion (also known as the Devils Own) was formed in April 1940 at Ingleburn army camp, south-west of Liverpool. The battalion was part of the 20th Brigade of the newly formed 7th Division. It completed basic training at Ingleburn before marching to Bathurst army camp to undergo subunit field training. In October the 20th Brigade, comprising the 2/13th, 2/15th, and 2/17th Battalions, sailed from Sydney Harbour for the Middle East. The brigade transferred to the newly formed 9th Division en route to Egypt.

Arriving in November the battalion travelled by train to Palestine and went into camp at Kilo 89. Early in March 1941 the 9th Division moved into Cyrenaica replacing the 6th Division going to Greece. The Axis were also reorganising their forces. German forces landed at Tripoli, bolstering the Italians, and advanced east.

The British were forced to evacuate Benghazi and fall back to Tobruk, referred to as the Benghazi handicap. The 2/13th covered the divisions withdrawal. The 2/13th was first complete Australian unit to fight German troops during the Second World War. The battle took place at Er Regima on 4 April 1940. The battalion was thinly spread along an 11 kilometre front against a German force of about 3,000 men. The battle began mid-afternoon and continued into the night. They initially moved of on foot but were soon picked up by trucks and driven 16 km east of Barce to rest.

By 9 April the 2/13th joined the rest of the division at Tobruk. It helped defend the fortress for eight months, being the only Australian battalion to see out the siege. It planned to evacuate in October but was delayed when their convey was forced to turn back from enemy air attack.

The battalion remained in Tobruk until the siege was lifted in December. The 2/13th rejoined the division at Lattakia.

By July 1942 the war in North Africa was critical for the British Eighth Army. German and Italian forces had reached El Alamein, about seventy miles from Alexandria. The 9th Division rushed to Alamein and held the northern sector for almost four months while the Eighth Army reinforced under new a commander. The 2/13th reached the forward British defences in mid-July and moved to Tel El Eisa in early-August. It fought in the Alamein battle from 23 October to 5 November 1942.

The 9th Division was recalled to Australia to face a new enemy the Japanese. The 2/13th left Egypt in January 1943 and disembarked at Sydney in February. After leave and jungle training on the Atherton Tablelands in Queensland in August the battalion embarked for Milne Bay in Papua.

On 4 September the battalion departed Milne Bay on landing craft and landed on Red Beach, north-west of Lae, without casualties. It carried out subsequent jungle operations until Lae fell 12 days later.

The battalion also landed at Scarlet Beach near Finschhafen on 22 September, helping defend the area against Japanese counter-attack. After leave, it reformed at Ravenshoe and did not return to action until the final months of the war. Towards the end of April the 9th Division was transported to Morotai to prepare for amphibious landings on Borneo as part of the OBOE operations. The 2/13th landed at Brunei on 10 June before making another landing in the MiriLutong area ten days later.

The battalion captured the Lutong airfield and oil tanks and moved inland along the Pujut Road to the Pujut oilfields. It then moved along Canada Hill to Lobang, where it remained until the end of the war. Following Japans surrender, the 2/13ths ranks thinned, as men were discharged or transferred. The battalion moved to Labuan in November and in December sailed to Australia to wind up in preparation for disbandment.

See my other Australian rare army books. The item "A Pictorial History Of The Australian Infantry Battalion A. F VERY RARE" is in sale since Saturday, November 12, 2016. This item is in the category "Collectables\Militaria\1939 - 1945 (WWII)".

The seller is "realdeals770" and is located in St Ives, NSW. This item can be shipped worldwide.