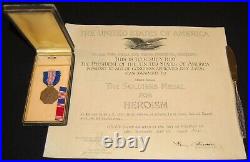 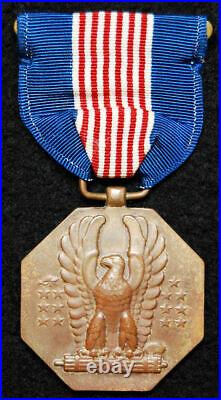 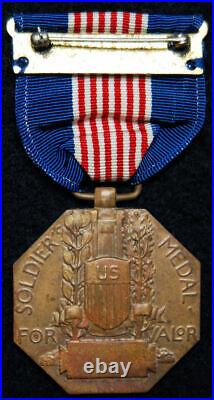 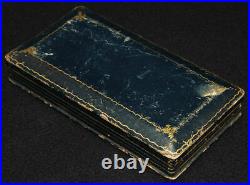 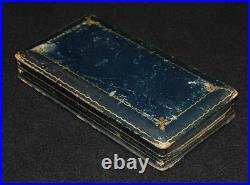 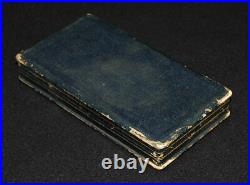 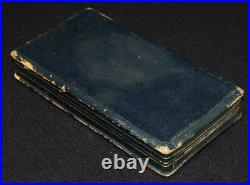 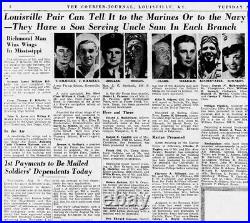 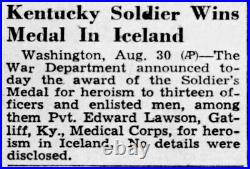 Available is a World War II Army Soldier's Medal group that comes with a very rare 1926 style certificate. The group consists of the following items. Cased WWII Soldier's Medal. The medal appears to be from one of the very first un-numbered contracts. It comes in an early real leather covered black untitled case with a lapel pin.

The medal has its original slot broach mounted ribbon. The medal is not named. A ½ inch wide ribbon bar with ribbons for the Soldier's Medal and Army Good Conduct Medal. The ribbons have been hand stitched to a two place bar that has an open loop catch. A very rare 12 by 14 ½ inch 1926 style certificate for the Soldier's Medal. The certificate is named to Edward Lawson who was issued the medal for an action in Iceland on July 2, 1942. The printed and filled in certificate reads, THE UNITED STATES OF AMERICA - TO ALL WHO SHALL SEE THESE PRESENTS, GREETING: - THIS IS TO CERTIFY THAT - THE PRESIDENT OF THE UNITED STATES OF AMERICA - PURSUANT TO ACT OF CONGRESS APPROVED JULY 2, 1926.

HAS AWARDED TO - Edward Lawson - THE SOLDIERS MEDAL - FOR - HEROISM - in Iceland on July 2, 1942, while serving as private first class, Medical Depart - ment, United States Army. GIVEN UNDER MY HAND AT THE CITY OF WASHINGTON - THIS thirteenth DAY OF August, 1942.

The certificate bears the seal of the War Department and the stamped signature of the Adjutant General and the Secretary of War. I dont have any research on Lawson at this time beyond what is on the certificate and the newspaper clippings I have posted. Overall, the items are in good condition but do show some storage age. The leather on the outside of the case shows age to the edges and wear spot to the bottom right hand corner on the lid.

Lastly, the certificate has been rolled, shows some creases (not folded), and a small ½ inch tear at the top margin above the "A" in AMERICA. It also appears that the document has been in a frame at one time as there are signs of corner mounting. Despite the light age, the group displays very well. Be sure to check out the large photos I have posted and judge condition for yourself. Don't miss out on this group with a document that is missing from most collections!

If you have any questions or need more pictures, please feel free to ask. The item "Early WWII US Army Soldier's Medal Group with Rare 1926 Style Named Certificate" is in sale since Thursday, December 24, 2020. This item is in the category "Collectibles\Militaria\WW II (1939-45)\Original Period Items\United States\Medals & Ribbons". The seller is "mgthomas68" and is located in Pine Bluffs, Wyoming. This item can be shipped to United States.