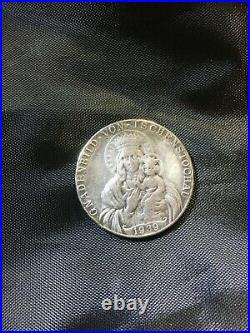 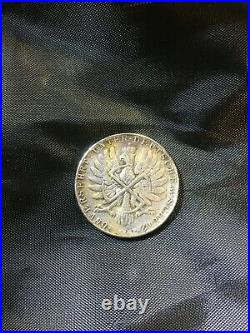 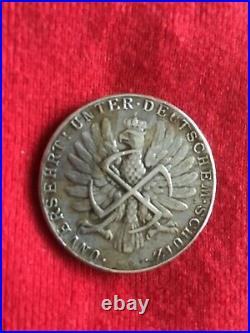 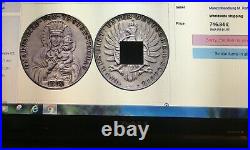 When the Wehrmacht entered Poland in 1939, Czestochowa (the 8th largest city in Poland) was renamed by them Tschenstochau. The Germans took the symbol of Poland, the Madonna and child (story below) and put their swastika on the back. It was a propaganda for Germany.

Translated the front of the coin says: Madonna from Tschenstochau and the back says: Intact (or perfect) under German protection. Practically impossible to find this medaille.

TheVirgin Mary's suffering is the essence of the Polish soul, Polish culture, Polish Catholicism, Polish history and of all Polish mothers. She has been the most powerful symbol of "Polishness" since the painting was brought to Czestochowa in 1382 when Poland was coming a nationhood. Through Poland's very turbulent history (the Russian partitions, WWII, and post-war communism). Has always stood as the epitome of perfect motherhood, loving and forgiving, protector of her children who shared her grief in losing her son to a violent death on the cross.

The story of the image of the Virgin Mary in Poland has its roots in legend. It is believed that the figure of Matka Boska Czestochowska was painted by Luke the Evangelist on a table top which was built by Jesus himself. It was discovered in the Holy Land by St Helen, the mother of Emperor Constantine and a collector of Christian relics. The piece was enshrined in Constantinople, where it remained for the next 500 years Maniura, 2004, p. The painting was then given as a wedding present from the Byzantine emperor to a Greek princess marrying a Ruthenian nobleman in 803 Maniura, 2004, p. 98 before it eventually arrived in Poland in 1382.

The Polish historian Jan Dlugosz wrote in his fifteenth-century work. That the work of art was brought to the Pauline monastery at Czestochowa by Prince Wladyslaw Jagiello from a castle at Belz, Russia. Prince Jagiello invited monks from Hungary into Poland to safeguard the holy picture. Four years later, in 1386, at the monastery of Jasna Góra in the small town of Czestochowa, these monks established a shrine for the sacred painting. When the Hussites (the Czech forerunners of the Protestant reformation) attacked Jasna Góra in 1430, they damaged the work with arrows and by slashing the Virgin's face with a sword.

The legend continues with the monks rescuing the painting from a bed of mud, where a miraculous fountain appeared, which then they used to carefully clean the painting. It was said to have been repainted in Krakow, but the arrow marks and the gash from the sword remained and are clearly visible to this day. On September 8, 1946, a year after the liberation of Poland, huge crowds of people gathered at Czestochowa and expressed gratitude to the Virgin Mary. Because of its strongly held devotions and the high number of followers during the communist era in Poland, Jasna Góra, the home of the Black Madonna, became known as the centre of anti-government resistance. When the Germans invaded France, they took a huge amount of young men as STO (service travail obligatoire ["voluntary" workers]) so they would have free labor in their factories in Germany.

My father was 19 at the time. He was taken to a factory in Schwenningen. There he met other " voluntary workers" from Russia and Poland. One of the polish men he worked with, knowing he was going to get in serious trouble with the Germans for refusing to work, gave my father the medal, told him the story, and said the Madonna would protect him.

My father never saw the man again but he, himself, managed to escape Schwenningen, and walking at night through the Black Forest, eventually made it back to his home in Paris. He always kept the medal with him. This item is in the category "Collectibles\Militaria\Current Militaria (2001-Now)\Original Items\Challenge Coins". The seller is "adlait" and is located in this country: US.