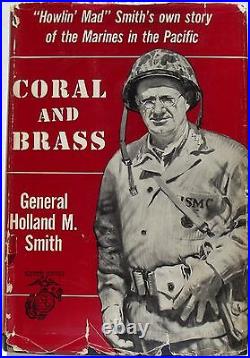 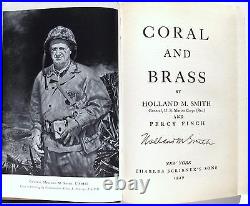 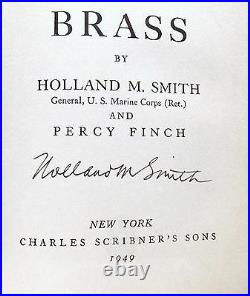 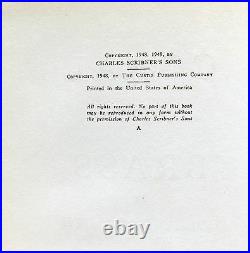 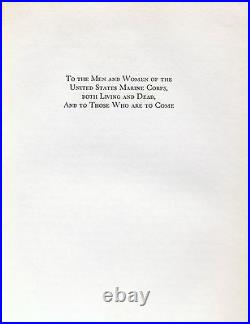 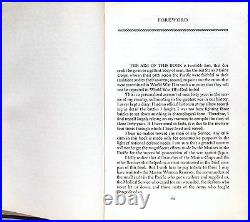 Holland McTyeire''Howlin' Mad'' Smith [1881 1967] was a United States Marine Corps General during World War II, who is sometimes called the''father'' of mordern U. His nickname''Howlin' Mad'' was given to him by his troops in the Dominican Republic in 1916. On the eve of World War II, he directed extensive Army, Navy and Marine amphibious training which later became a major factor in the successful U.

S landings in both the Atlantic and the Pacific theatre of war. General Smith also prepared troops for the Kiska and Attu landings and led the V Amphibious Corps in the assaults on the Gilberts, the Marshalls, Saipan, Tinian, the Marianas and Task Force 56 at the island of Iwo Jima. The book was authored by General Smith and was released in 1949, and is signed on the title page''Holland M. Smith'' in black fountain pen.

The book is a hardcover with 289 pages and measures 6.00 x 9.00 inches. The paper cover has several tears/paper loss, the hardcover has general wear/soiling and the pages has some trivial scattered foxing and general toning. The autograph of General Holland Smith in not common to obtain, the autograph is authentic and signed on a desirable format and the book is a nice example of this prominent United States Marine Corps general.

Our policy is simple, all our autographs are researched and guaranteed authentic with''No'' time limits. Check out my other items. Be sure to add me to your favorites list. The item "General Holland'Howlin Mad' Smith WW II Marine Commander Signed Book''Rare'" is in sale since Tuesday, December 15, 2015.