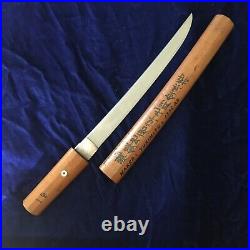 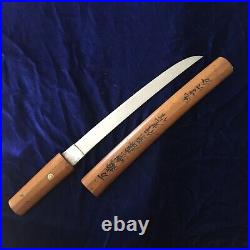 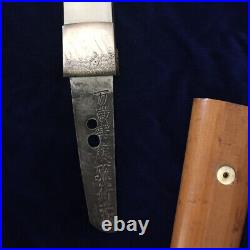 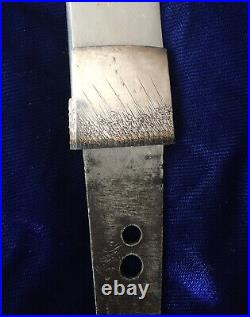 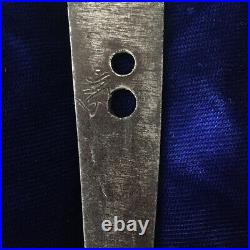 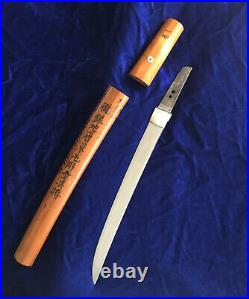 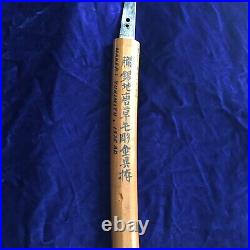 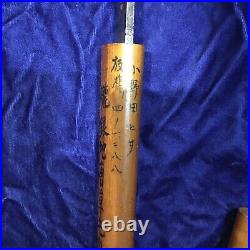 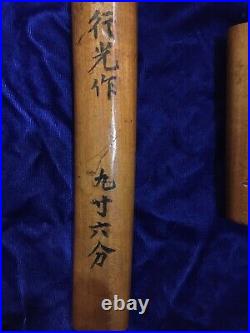 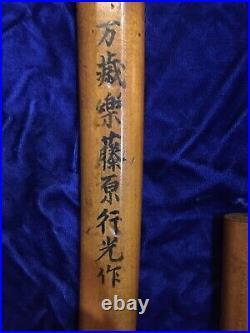 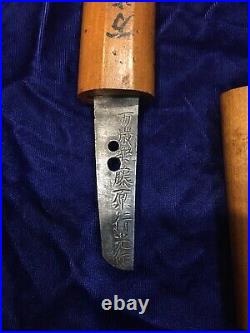 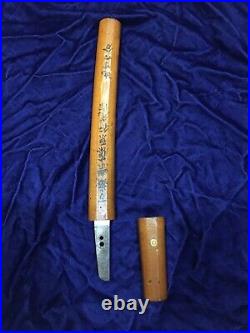 Japanese trophy item from WWII GI Estate Super Rare Tanto Samurai sword / knife! By the maker Yukimitu / Yukimitsu circa 1375 Signed on blade handle. Must see, super rare find!! This tanto came out of the estate of a WWII veteran who served in the pacific during the conflict. Im now parting with the sword so others may enjoy the collecting and treasure.

Scabbard measures 17 inches long. Blade is in excellent condition. Beautiful workmanship at the handle. Ive photographed the signature and information painted on the piece. Very good condition for its age.

Verbally authenticated by the Curator of the West Point Museum. Would make a great gift for a WWII scholar.

Guaranteed Original Truly fantastic pieces of history. A must for the SERIOUS Collector of World War Two (WWII) memorabilia. Brief History of the tant. A tant (, "short sword") is one of the traditionally made Japanese swords (nihonto) that were worn by the samurai class of feudal Japan. The tant dates to the Heian period, when it was mainly used as a weapon but evolved in design over the years to become more ornate.

Tant were used in traditional martial arts (tantojutsu). The term has seen a resurgence in the West since the 1980s as a point style of modern tactical knives, designed for piercing or stabbing. Description The tant is a sword, but is used as a knife. The blade is single or double edged with a length between 15 and 30cm (1 Japanese shaku).

The tant was designed primarily as a stabbing weapon, but the edge can be used for slashing as well. Tant are generally forged in hira-zukuri style (without ridgeline), meaning that their sides have no ridge line and are nearly flat, unlike the shinogi-zukuri structure of a katana. Some tant have particularly thick cross-sections for armor-piercing duty, and are called yoroi toshi. Tant were mostly carried by samurai, as commoners did not generally wear them. Women sometimes carried a small tant called a kaiken in their obi primarily for self-defense.

Tant were sometimes worn as the sht in place of a wakizashi in a daish, especially on the battlefield. Before the advent of the wakizashi/tant combination, it was common for a samurai to carry a tachi and a tant as opposed to a katana and a wakizashi It has been noted that the tachi would be paired with a tant and later the uchigatana would be paired with another shorter uchigatana. With the advent of the katana, the wakizashi eventually was chosen by samurai as the short sword over the tant. Kanzan Sat in his book The Japanese sword notes that there did not seem to be any particular need for the wakizashi and suggests that the wakizashi may have become more popular than the tant due to the wakizashi being more suited for indoor fighting. He mentions the custom of leaving the katana at the door of a castle or palace when entering while continuing to wear the wakizashi inside. History of tant in Japan The production of swords in Japan is divided into specific time periods: Jokoto ancient swords, until around 900 A.

Koto (old swords from around 9001596) Shinto (new swords 15961780) Shinshinto (new Shin Shinto swords 17811876) Gendaito (modern swords 18761945) Shinsakuto (newly made swords 1953present) Tant by Hyga Masamune, 24.8cm, Unsigned Masamune, formerly in the possession of Ishida Mitsunari, who gave it to his brother-in-law; the tant was stolen during the Battle of Sekigahara by Mizuno Katsushige, governor of Hyga Province, Kamakura period, Mitsui Memorial Museum, Tokyo. The tant was invented partway through the Heian period. With the beginning of the Kamakura period, tant were forged to be more aesthetically pleasing, and hira and uchi-sori tant becoming the most popular styles. Near the middle of the Kamakura period, more tant artisans were seen, increasing the abundance of the weapon, and the kanmuri-otoshi style became prevalent in the cities of Kyoto and Yamato.

Because of the style introduced by the tachi in the late Kamakura period, tant began to be forged longer and wider. The introduction of the Hachiman faith became visible in the carvings in the hilts around this time. The hamon (line of temper) is similar to that of the tachi, except for the absence of choji-midare, which is nioi and utsuri.

Gunomi-midare and suguha are found to have taken its place. During the era of the Northern and Southern Courts, the tant were forged to be up to forty centimeters as opposed to the normal one shaku (about thirty centimeters) length. The blades became thinner between the ura and the omote, and wider between the ha and mune.

At this point in time, two styles of hamon were prevalent: the older style, which was subtle and artistic, and the newer, more popular style. With the beginning of the Muromachi period, constant fighting caused the mass production of blades, meaning that with higher demand, lower-quality blades were manufactured. Blades that were custom-forged still were of exceptional quality, but the average blade suffered greatly. As the end of the period neared, the average blade narrowed and the curvature shallowed. Momoyama to the early Edo period Approximately two hundred and fifty years of peace accompanied the unification of Japan, in which there was little need for blades.

In this period, both the katana and wakizashi were invented, taking the place of the tant and tachi as the most-used pair of weapons, and the number of tant forged was severely decreased. The only tant produced during this period of peace were copies of others from earlier eras. Late Edo period There were still a few tant being forged during this period, and the ones that were forged reflected the work of the Kamakura, Nambokucho, or Muromachi eras.

Suishinshi Masahide was a main contributor towards the forging of tant during this age. There are now only prehistoric tant being used in combat. Meiji to present Many tant were forged before World War II, due to the restoration of the Emperor to power. Members of the Imperial Court began wearing the set of tachi and tant once more, and the number of tant in existence increased dramatically.

After World War II, a restriction on sword forging caused tant manufacture to fall very low. [15] American and European interest in Japanese martial arts since the war created a demand for the tant outside Japan from the 1960s through the present time. Types of tant Blade types The general blade shape is approximately 25 cm long, 17 mm wide (near the tang), 8.0 mm thick (near the tang) and approximately straight. Actual historical examples would vary in length, width, thickness and curvature.

The hira and kiriha sides of the katakiriha blade have been swapped to allow the tip to point consistently to the left while still showing the chisel-like side. Hira: A very common tant form with no shinogi, the edge bevels reaching all the way from the edge (ha) to the back (mune) with no separate flats in between, creating an almost triangular cross-section (the back is ridged, as on most other blade forms, so the cross-section is actually an extremely asymmetrical diamond shape; on shinogi zukuri blades it is hexagonal). It is extremely common due to the simplicity of its design. Shinogi: This is the most common type of blade geometry for long swords, but tant made in this form are very rare, usually created from cut-down blades when a longer sword has been broken.

Shinogi means the central ridge that runs along the length of the blade between the edge bevels and the body of the blade. Osoraku: Osoraku zukuri features an extremely long o-kissaki type point, over half the blade's length. Shobu: A common blade type that is very similar to the shinogi zukuri, except that it lacks a yokote, the distinct angle between the long cutting edge and the point section, and instead the edge curves smoothly and uninterrupted into the point. Unokubi: An uncommon tant style akin to the kanmuri-otoshi, with a back that grows abruptly thinner around the middle of the blade, but in the unokubi zukuri it regains its thickness just before the point.

There is normally a short, wide groove extending to the midway point on the blade. Kanmuri-otoshi: These tant were shaped in hira or shobu style but from about half way to the tip the back edge was sharpened though this second edge was not particularly sharp. They had a groove running halfway up the blade and were similar to the unokubi style tant.

The most well known historical blade of this type is the tachi Kogarasu Maru, "Little Crow", one of the National Treasures of Japan. Moroha: A rare, double-edged tant type that has a diamond-shaped cross-section.

The blade tapers to a point and contains a shinogi that runs to the point. Yoroi toshi or yoroi doshi: tant that have particularly thick cross-sections for armor-piercing duty. Katakiriha: An asymmetric tant form, sharpened only on one side to create a chisel-shaped cross-section. Kubikiri: A very rare type; the sharpened blade is on the inside curve rather than the outside. It has no sharpened point, making it difficult to use in battle and enshrouding the weapon in mystery.

Kubikiri can be roughly translated to "head cutter". According to one myth, they were carried by attendants of samurai for cutting off the heads of fallen enemies. There are other speculations existing about the kubikiri's possible uses. Perhaps they were used by doctors or carried by high-ranking officials as a badge is worn today.

They could also have been used for cutting charcoal or incense, or used as an artistic tool for pruning bonsai trees. Hochogata: A tant form that is commonly described as a short, wide, hira.

The hochogata was one of the blade type that the legendary swordsmith Masamune favored. Mountings (koshirae) Aikuchi: The aikuchi is a tant koshirae where the fuchi is flush with the mouth of the sheath. Aikuchi normally have plain wooden hilts, and many forms of aikuchi have kashira that are made from animal horns.

Hamidashi: The hamidashi is a tant koshirae that features a small handguard. The item "Japanese trophy item WWII GI Estate Rare Tanto Samurai sword Signed Yukimitu" is in sale since Sunday, August 30, 2020. This item is in the category "Collectibles\Militaria\WW II (1939-45)\Original Period Items\Japan\Edged Weapons". The seller is "pa-history-coll" and is located in New York, New York.