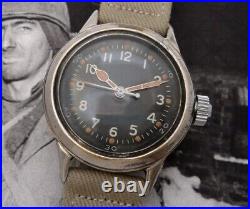 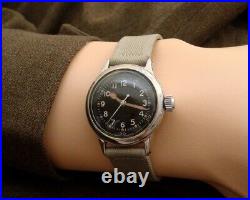 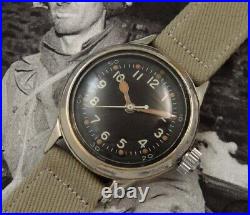 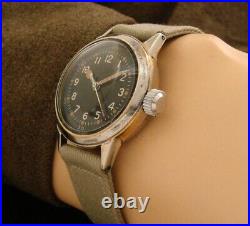 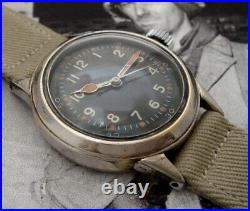 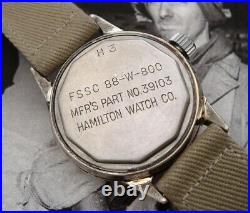 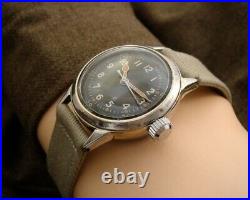 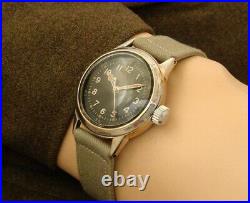 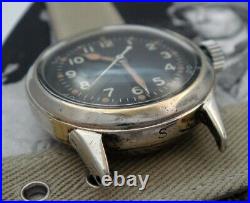 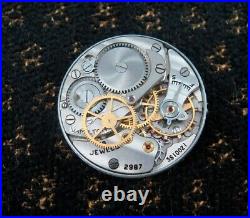 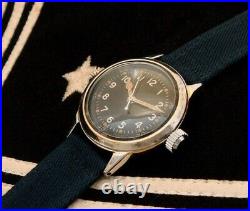 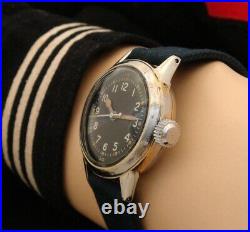 Men's Rare Historic WWII Navy Pilot's Hamilton 2987 Wristwatch w/Strap - SERVICED. As the entire world devolved into conflict during the late'30s, American watch houses stepped in and helped U. Forces as best they could. Eager to support the Allied war effort, Hamilton completely shut down civilian watch production, using their vast horological resources and expertise to produce military timepieces for the Allies, including Canada and Russia. For example, hundreds of Hamilton factory employees worked double-shifts to produce marine chronometers for Navy vessels.

Those tasked with assembling railroad pocket watches began adapting these precision instruments instead for navigational and transportation pocket watches. Hamilton's renown wristwatch movements were fitted in military cases and distributed through the ordnance department to Allied soldiers - many of whom had never had a watch on their wrist. Fresh, startlingly accurate 14/0 980 caliber movements were re-purposed for the war effort as bomb timers to measure the distance and release-rhythm of bombing runs. Part of Hamilton's critical assistance to the war effort was the production of superlative wristwatches for pilots in the U. Air Corps/Air Force; Navy and Marines. Under government contract FSSC 88-W-800 39103, watch movements were manufactured by Hamilton, housed in Star Watch Company screwback cases and issued specifically to Navy Pilots during the war. Treasured for their historical significance, accuracy and handsome wrist stance, these rare gems were powered by specially designed 18 ruby-jeweled "2987" movements that sported among other technical achievements a "hack" feature for synchronization. By pulling the crown, pilots could stop the action of the mechanism to set their watches in unison. These particular wristwatch movements were unique to Navy and Marine pilots. Such examples are set apart by a distinctive "S" between the lugs, designating their use. But the true distinction of military timepieces rests not with their precision, but with their owners. There is no way any of us can understand the honor, strength and dignity of the men and women who wore them. We at Strickland Vintage Watches take immense pride in offering works of military horological art and history whenever we can.

They are important artifacts, produced by gifted engineers and worn by heroes. We're humbled to hold, preserve and place them on the wrists and in the collections of those who recognize their significance. This example of the Hamilton Naval pilot's watch is just such a treasure. Its movement and dial are in startlingly original condition.

While its 38mm by 32mm case required some restoration, the watch looks very much like it did on a naval pilot's wrist during WWII. Of course naval pilots wore distinctive, mission-specific uniforms, usually in a canvas/khaki color. We have taken the liberty of fitting this piece with a strap similar in style and color to those worn with these flight suits.

Also, we've pictured the watch in a navy-blue strap similar in color to the U. Navy "cracker-jack" uniforms, because these men were heroes, too.

We will include both straps with this timepiece, as well as a copy of the book "Heroes in the Skies: American Aviators of WWII" by Ian Darling. Truman's grandson, Clifton Truman Daniel provides the forward in the book. We invite you to take a moment to admire this artifact for the piece of history and precision instrument that it is and to remember the anonymous hero who risked his life for us while he wore it. May it help to inspire you to learn as much as you can about every aspect of WWII and the Allied effort. You will be better for it. Those of you who appreciate these pieces know it's not just about the watch, it's about who wore the watch and why. It's about respect and recognizing the sacrifice of others. For those of you who may not know us, we at. Featured as Forbes magazine's "Best of the Web" honoree consecutively since 2000 for timepieces, we're committed to bringing the best, the rarest, the cleanest examples of old wrist and pocket watches to clients around the world.

Monday through Saturday from 10 a. We take great pride in our images and item descriptions and are careful to note as much about an item as we can.

If you have a question or would like to see the image of an item at another angle, we are happy to accommodate you. Please check our feedback; we try to be as accommodating as possible. We invite you to find out more about us by clicking on our ME page! This item is in the category "Jewelry & Watches\Watches, Parts & Accessories\Watches\Wristwatches". The seller is "strickland_vintage_watches" and is located in this country: US.