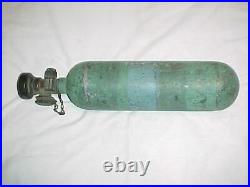 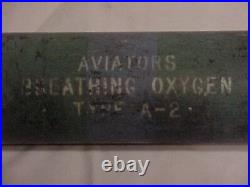 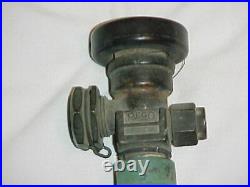 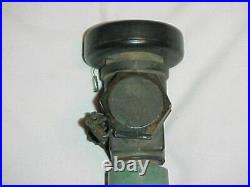 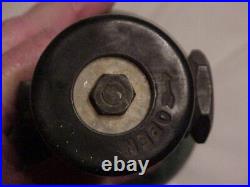 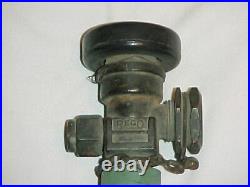 ORIGINAL, RARE & VG Condition Pre-WWII AAF Type A-2 Oxygen "Walkaround" Bottle. This is an ORIGINAL Army Air Force Type A-2 Oxygen "Walkaround" Bottle as used by airmen just prior to WWII. The walkaround bottles of various types and sizes allowed crewmen of multi-engine aircraft when flying at high altitude to disconnect from the aircraft's oxygen system to literally walk throughout the aircraft without suffering from anoxia or hypoxia; i. The type A-2 bottle was the one of the earliest walkaround bottles after the conversion from liquified oxygen to conventional gaseous oxygen in "constant flow" systems prior to WWII. The bottle has no regulator attached. According to Glen Sweeting in his magnum opus. At page 64 of the first edition, he states that the A-2 bottle was standardized on December 1, 1939 and utilized a A-8A "constant flow" regulator.

These constant flow oxygen regulators exhausted the supply of oxygen more quickly and ran the risk of leaving the airmen subject to anoxia and losing consciousness and were later replaced by a series of "demand" regulators, such as the A-13. The bottle is in in VERY GOOD used condition and apparently saw use during the War from the scuffing on it. Here's an opportunity for the advanced AAF collector to obtain a rare example of an essential piece of equipment used by airmen prior to and during WWII. Please scroll downward to see the last image!

I'm a militaria collector like you and I do this as a sideline to my own collecting. Nonetheless, I'll handle your order in a business-like and professional manner. Vendio Images: More than just a pretty image.

250+ Mobile Responsive & Active Content Free Listing Templates with Vendio Sales Manager. Get business information that counts! - Vendio Counters are active content free. This item is in the category "Collectibles\Militaria\WW II (1939-45)\Original Period Items\United States\Field Gear, Equipment". The seller is "stanwolcott" and is located in this country: US.