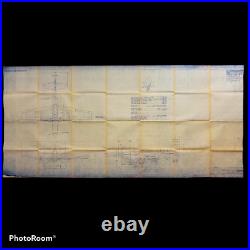 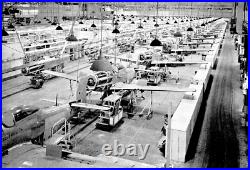 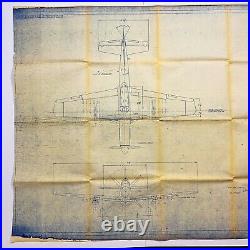 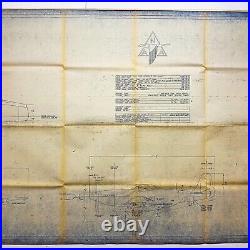 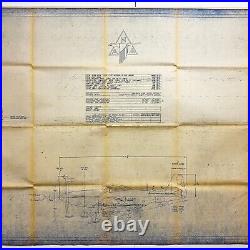 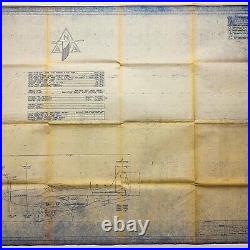 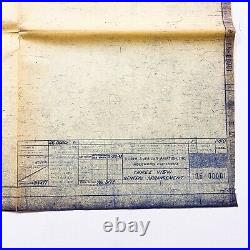 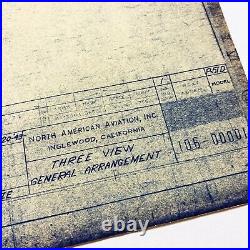 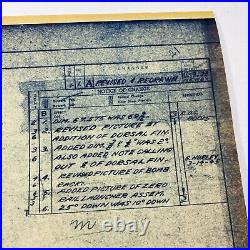 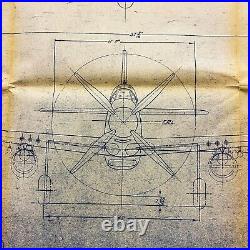 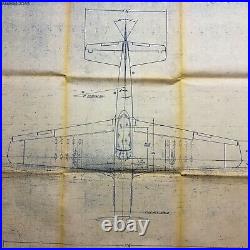 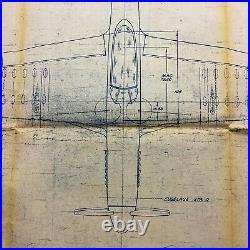 Size: 36 x 78 inches. It's extremely rare and exclusive North American Aviation (NAA) blueprint was originally drafted by Roy Rogers and Bob Smith on May 20th of 1943. This blueprint was used in the construction of the North American Aviation P-51 Mustang which was an American long-range, single-seat fighter and fighter-bomber used during World War II. Titled Three View - General Arrangement this blueprint is revised from previous designs and shows the addition of the dorsal fin, revised bomb rack, Added picture of zero rail launcher assembly, and various adjusted specifications and construction measurements. Controlling the air proved key to controlling the ground. The long-range P-51 Mustang fighter was invaluable to the Allied victory, enabling resumption of strategic bombing after heavy losses suffered by unescorted bombers in 1943. Developed for export to Britain, models modified by the British to use Rolls-Royce Merlin engines became Americas most capable wartime fighters.

However, the P-51 did have issues. While the American-built Allison engine was fine at lower altitudes, it suffered a drastic drop-off in performance at higher ones.

In the fall of 1942, the Americans and British experimented with Mustangs by adding British Rolls-Royce Merlin engines to the air-frame. The Mustangs top speed leapt to well over 400 miles per hour, and it no longer suffered from performance drop-off at higher altitudes. Production of the Mustang was thrown into high gear and the first American P-51 units arrived in Europe towards the end of 1943. The Mustang was designed in April 1940 by a design team headed by James Kindelberger of North American Aviation (NAA) in response to a requirement of the British Purchasing Commission. The Purchasing Commission approached North American Aviation to build Curtiss P-40 fighters under license for the Royal Air Force (RAF).

Rather than build an old design from another company, North American Aviation proposed the design and production of a more modern fighter. The prototype NA-73X airframe was rolled out on 9 September 1940, 102 days after the contract was signed, and first flew on 26 October. The Mustang was designed to use the Allison V-1710 engine, which had limited high-altitude performance in its earlier variants. The aircraft was first flown operationally by the Royal Air Force (RAF) as a tactical-reconnaissance aircraft and fighter-bomber (Mustang Mk I). Replacing the Allison with a Rolls-Royce Merlin resulted in the P-51B/C (Mustang Mk III) model and transformed the aircraft's performance at altitudes above 15,000 ft (4,600 m) (without sacrificing range), [9] allowing it to compete with the Luftwaffe's fighters.

[10] The definitive version, the P-51D, was powered by the Packard V-1650-7, a license-built version of the two-speed two-stage-supercharged Merlin 66, and was armed with six. 50 caliber (12.7 mm) AN/M2 Browning machine guns. From late 1943, P-51Bs and P-51Cs (supplemented by P-51Ds from mid-1944) were used by the USAAF'sEighth Air Force to escort bombers in raids over Germany, while the RAF's Second Tactical Air Force and the USAAF's Ninth Air Force used the Merlin-powered Mustangs as fighter-bombers, roles in which the Mustang helped ensure Allied air superiority in 1944. The P-51 was also used by Allied air forces in the North African, Mediterranean, Italian and Pacific theaters. During World War II, Mustang pilots claimed to have destroyed 4,950 enemy aircraft.

The item "RARE 1943 Original WWII North American Aviation P-51 Mustang Design Blueprint" is in sale since Wednesday, October 28, 2020. This item is in the category "Collectibles\Militaria\WW II (1939-45)\Original Period Items\United States\Field Gear, Equipment". The seller is "worldwarartifactsandrelics" and is located in Algonquin, Illinois. This item can be shipped worldwide.