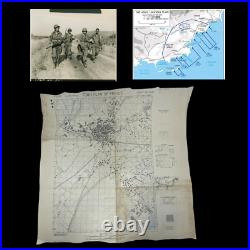 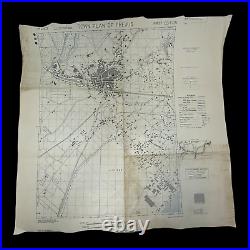 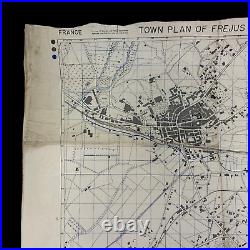 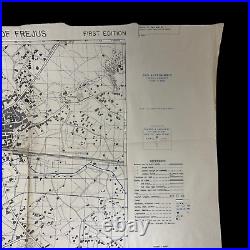 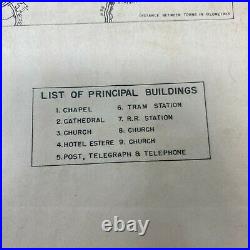 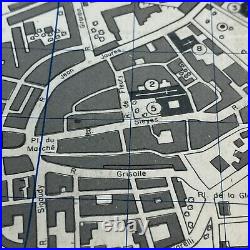 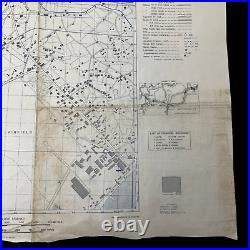 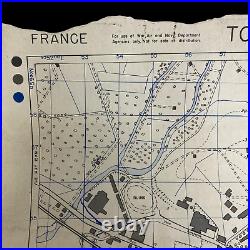 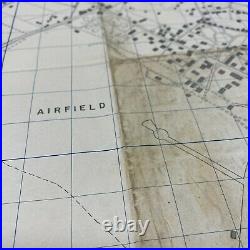 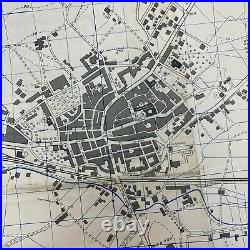 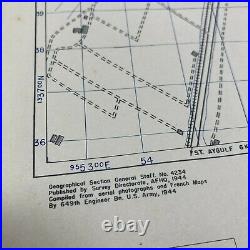 This extremely rare WWII D-Day assault map was carried during the infamous D-Day amphibious landings of Operation Dragoon. Operation Dragoon (initially Operation Anvil) was the code name for the landing operation of the Allied invasion of Provence (Southern France) on 15 August 1944.

The operation was initially planned to be executed in conjunction with Operation Overlord, the Allied landing in Normandy, but the lack of available resources led to a cancellation of the second landing. As a result, the operation was finally approved in July to be executed in August. This heavily used and'salty' map was used as the primary D-Day assault map of the 142nd infantry whose primary objective was capturing the town of Fréjus from the southeast by nightfall on D-Day. Landing over Camel Green and proceeding inland over the high ground, the 142nd attacked Fréjus from the northeast and captured the town at 1355 hours, 16 August.

Dated one month before the D-Day landings this map was produced in July 1944, one month before the assault of Southern France. What makes this map so rare is the "list of principal buildings". Labeled #1-9 these were some of the most vital visual markers for infanry assaulting the town and planning their assault or counter attacks in the field. It labels key buildings such as the church, tram station, Hotel Estere, etc. This map played a vital role in the capture of the Axis-occupied town during the D-Day landings. Just to think of a group of WWII US soldiers circled around this map planning the assault of the town is almost unreal to imagine! Full history of the D-Day landings on Camel Beach and the assault of Frejus. The landing beaches on the right flank of the Dragoon assault area, code-named. Were the target of Major General John Dahlquist and the veteran 36th Infantry Division. The division's zone of responsibility stretched from the east bank of the Argens River, including the important road junction and town of Fréjus, Puget-sur-Argens, and Le Muy to the mountainous region of the Esterel Forest some eight miles away to the east.

This coastal area included the open, sandy, but heavily fortified Camel Red Beach at the mouth of the Argens River, just to the west of Frejus. Camel Green Beach lay to the east of St.

The 36th Division planners considered Camel Green large enough only for initial operations, but too small for sizable follow-on forces. On the extreme eastern flank of the invasion coast, Camel Blue Beach, at Antheor Cove, was rather small and not well suited for major landing operations. The 143rd Infantry Regiment landed over the beaches cleared by the 141st INF with the initial objectives of clearing the coast roads to the west and capturing the town of St. The regiment landed over Camel Green Beach in a column of battalions: 1st Battalion at 0945 hours, 2nd Battalion at 1005 hours, and 3rd Battalion at 1035 hours.

The 1st Battalion seized the high ground north of the beach, and then moved west to attack St. Raphaël once the 3rd Battalion came ashore and moved into their positions on the high ground. The 2nd Battalion moved along the coast to attack the town from the east. The 142nd Infantry Regiment planned to make a delayed assault at 1400 hours over Camel Red Beach.

This was, quite possibly, the most difficult of all the Dragoon landings as this area southwest of Fréjus was quite heavily defended, and the Germans had clear lanes of fire over Fréjus Gulf and could easily target the approaching landing craft. At 1100 hours, minesweepers moved forward to sweep the Camel Red approach lanes, but as they neared the beach, heavy shelling forced them to retire. After a flight of 93 B-24 Liberator heavy bombers dropped 187 tons of bombs on the enemy defenders, the minesweepers started back in toward the beach.

Again, under a heavy artillery barrage, they managed to clear the lanes to within 500 yards of the beach. These also met with heavy enemy fire and withdrew.

While efforts to clear the beach continued, the 142nd INF, in more than 100 assault craft, waited for the signal to land. In the event that Camel Red proved too difficult to approach, planners prepared an alternative assault for the 142nd INF. The Commander of Naval Task Force 87, Rear Admiral Spencer S. Lewis, ordered that the alternate plan of landing the 142nd INF over Camel Green Beach behind the 143rd INF be put into effect immediately.

The fleet turned to the east, and the entire regiment landed over Camel Green without loss. The primary objective of the 142nd was capturing the town of Fréjus from the southeast by nightfall on D-Day. Obviously, the change in landing beach forced some operational changes as well. Raphaël fell to the 143rd INF on the morning of 16 August, and the 141st INF captured Theoule-sur-Mer late in the afternoon on the same day.

The 142nd INF continued west toward Puget, the 143rd moved north into the high ground toward the N-7, and the 141st INF consolidated its positions from the N-7 from the flank of the 143rd east to Theoule-sur-Mer. By the morning of 17 August, the "Texas" Division reached the Blue Line. The division then prepared for movement toward the northwest.