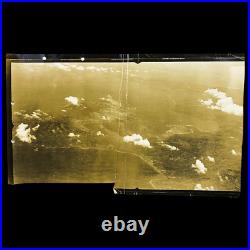 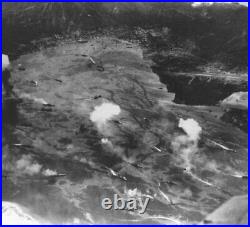 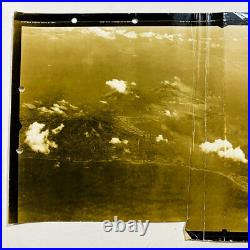 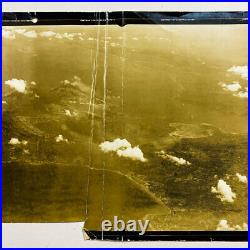 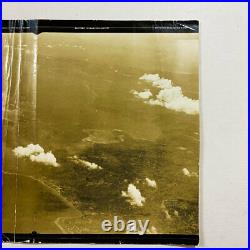 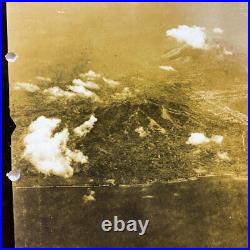 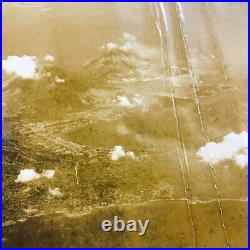 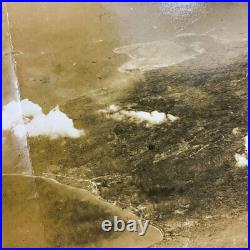 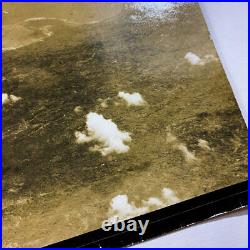 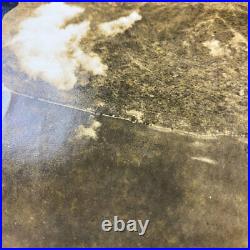 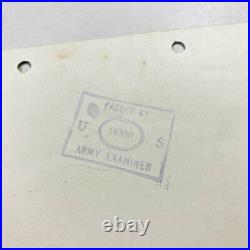 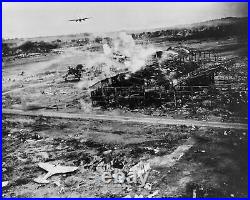 Size: 10 x 16.5 inches. This rare bombing and reconnaissance panoramic type'RESTRICTED' 5th Air Force photograph comes from the bring back collection of Sgt. Thompson served as an air gunner on combat missions aboard the infamous B-24 in the South Pacific against the Japanese.

Photographs such as these provided high ranking officials and intelligence officers with vital information that they used to direct future bombing missions, amphibious landing sites and strategical advantages needed to out-guess the Japanese. Thousands of pilots and aircrew throughout the war risked their lives to take photographs such as this one right here. As the Allies advanced westward toward Japan, Allied forces repeatedly bombed and stormed Japanese-held territory, targeting tiny islands as well as the jungles of New Guinea and the Philippines. The goal was to dislodge the enemy and to secure airfields and supply bases that could serve as the launching points for future attacks. This reconnaissance photograph is extremely rare as this panoramic photograph shows a detailed look at the Japanese Naval and cruiser force at the major Japanese base of Rabaul in November 1943.

This photograph was used as a secret reconnaissance tool for the planned Allied attack. The Allies of World War II conducted an air attack upon a cruiser force at the major Japanese base of Rabaul in November 1943. As a result of the Rabaul raids, the Japanese naval forces could no longer threaten the landings. The success of the raid began to change the strongly held belief that carrier-based air forces could not challenge land-based air forces.

Rabaul-on the island of New Britain-was one of two major ports in the Australian Territory of New Guinea. It was the main Japanese naval base for the Solomon Islands campaign and New Guinea campaign.

Simpson Harbor-captured from Australian forces in February 1942-was known as "the Pearl Harbor of the South Pacific" and was well defended by 367 anti-aircraft guns and five airfields. As a part of Operation Cartwheel, in the fall of 1943 the U. Fifth Air Force, the Royal Australian Air Force and the Royal New Zealand Air Force, all under the command of General George Kenney, began a sustained bombing campaign against the airfields and port of Rabaul. The initial mission was delivered by 349 aircraft on 12 October 1943, but it could not be followed up immediately due to bad weather. A single raid by 50 B-25 Mitchell medium bombers reached the target on 18 October.

Sustained attacks resumed on 23 October, culminating in a large raid on 2 November. The daybreak Navy air bombing of Rabaul was followed up an hour later with an Army Air Force raid by 27 B-24 Liberator heavy bombers of the Fifth Air Force, escorted by 58 P-38s. By the end of the attacks six of the seven Japanese cruisers at Rabaul had been damaged, four of them heavily. Atago suffered near misses by three 500 lb (230 kg) bombs that caused severe damage and killed 22 crewmen, including her captain. Maya was hit by one bomb above one of her engine rooms, causing heavy damage and killing 70 crewmen.

One bomb struck near Agano, which damaged an anti-aircraft gun and killed one crewman. Three destroyers were also lightly damaged. This item is in the category "Collectibles\Militaria\WW II (1939-45)\Original Period Items\United States\Field Gear, Equipment". The seller is "premierrelics" and is located in this country: US.