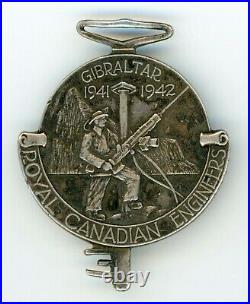 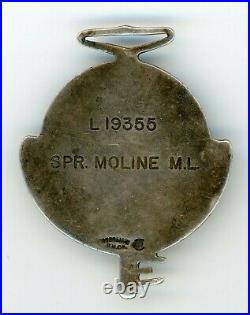 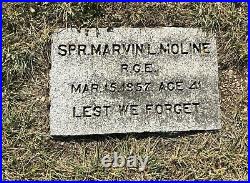 Rare original WW2 "Gibraltar Key" presented to members of a small tunneling unit of the Royal Canadian Engineers who were sent to the British fortress of Gibraltar to cut tunnels and even secret rooms into the living rock. Sterling silver award is in the form of a large watch fob, measures 62mm by 49mm, maker marked to reverse, also with "STERLING" stamp. Only 324 of these awards were presented; this one is named to L 19355 SPR. (service number indicates that Moline joined in Saskatchewan). Marvin Lawrence Moline died in 1957, and is buried in Rosetown Cemetery (Saskatchewan).

These medals were struck at the expense of the President of Noranda Mines; many of these RCE personnel were hard rock miners in Canada before the war. Condition is very good, slight bump to the teeth of the key at the bottom (as is often seen with this award). Thank you and good luck! The item "Rare Canada WW2 RCE Engineers Gibraltar Key Tunnelers Saskatchewan Miner" is in sale since Saturday, October 23, 2021. This item is in the category "Collectibles\Militaria\WW II (1939-45)\Original Period Items\Canada". The seller is "storeswallah" and is located in Victoria, British Columbia.