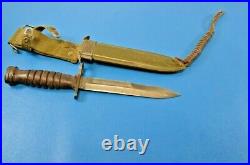 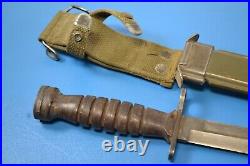 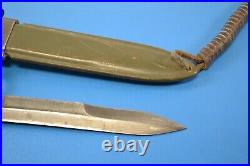 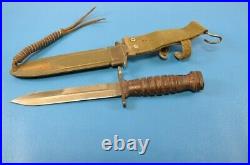 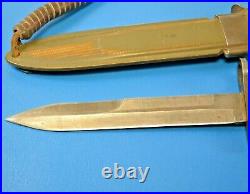 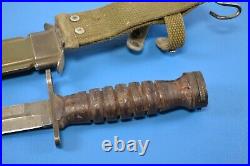 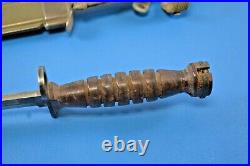 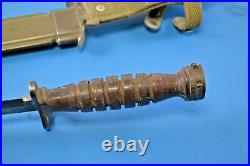 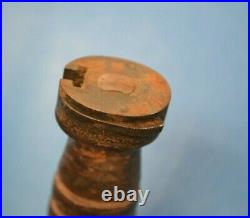 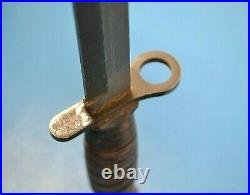 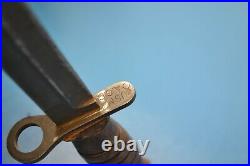 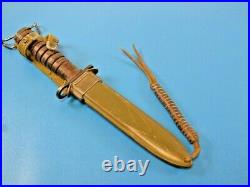 Blade shows some sharpening/feathering with a gray patina, leather handle shows some light age patina, wear, (just needs some oil), pommel end shows some light rust, that should clean off, but we have not touched it. All is tight with no looseness. Comes with a USM8 WWII Sheath and made obviously by B. Nice shape showing some light wear, use. Cross-guard top area is marked, A.

ACC stands for Aerial Co. Research has shown that A. Was used on the early production of these bayonets by Aerial. Later in the war they had them say Aerial. This is the rarest of the M1 Maker Bayonet with only 70k made of both ACC and AERIAL marked bayonets by this Co.

Side of markings also has the flaming bomb cartouche/ordnance markings. A very hard to find piece. See photos for further details, clarification, and condition. See our other Bayonets at TR-West.

The item "Rare Early WWII U. Bayonet Military M1 Carbine Knife Sheath" is in sale since Sunday, August 15, 2021. This item is in the category "Collectibles\Militaria\WW II (1939-45)\Original Period Items\United States\Edged Weapons". The seller is "tr-west" and is located in Redmond, Oregon. This item can be shipped to United States.