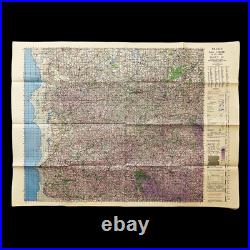 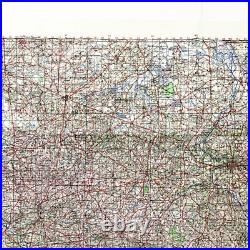 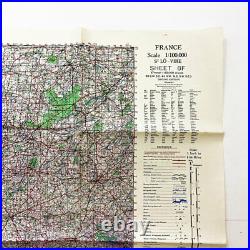 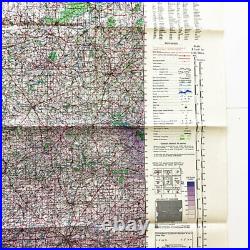 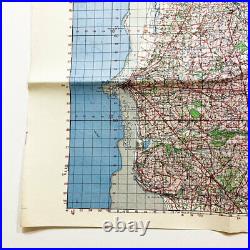 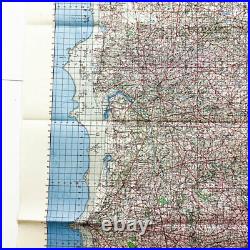 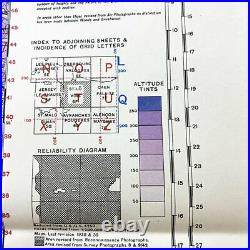 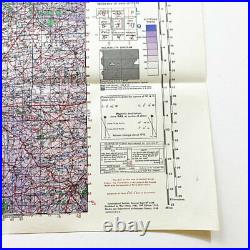 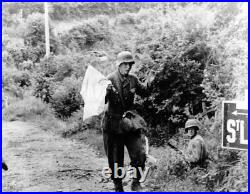 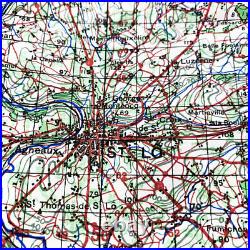 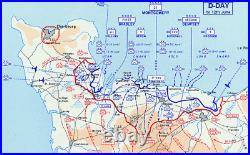 Size: 35 x 25.5 inches. The Battle of Saint-Lô is one of the three conflicts in the Battle of the Hedgerows, which took place between July 7-19, 1944, just before Operation Cobra. Saint-Lô had fallen to Germany in 1940, and, after the Invasion of Normandy, the Americans targeted the city, as it served as a strategic crossroads. Geographical Section, General Staff, No. 4249 Published by the War Office 1942, 2nd Edition 1943. This is a rare full color single side grid U. Infantry paper map of the historic battle of Saint-Lô, France. The 1943 map is gridded for triangulation and shows roads and foot paths as well as other major and minor building in the German occupied area of the Normandy area. This map was a bring back of an infantry soldier and would have been used by the U. Infantry soldier for moments and objective locations across the area against the Germans.

Following the successful lodgment of the Allied Beachhead in Normandy in June 1944, by the start of July, the objectives of the Allies changed. Up to that point the Allied forces had been involved in securing enough'elbow room' to build up their troop numbers for the breakout, and the ports with which to supply them. Now that this had been achieved, the American forces turned their attention south. In the east it was the town of Caen that was the key for the British Second Army to break out of Normandy, for the First US Army in the west the town of St Lô was the door to central France for them.

It had been an objective of the US 29th Division in the first few days following D-Day. However, with the German resistance to the landings being much stronger than anticipated, the American Army had been forced to concentrate all their resources to clearing out the Cotentin Peninsula and the port of Cherbourg at its northern tip. With no supplies available to continue operations towards St. Advance was halted on June 18th with the nearest US positions just two miles (3km) from the northern outskirts of the town.

(See Map "Towards St Lô 14-18 June 1944"). It was only on July 3rd that the advance south was finally renewed. Lô itself could be attacked there were several other obstacles that needed to be removed.

The western flank of the American line facing the town was far to the north, only just south of Carentan with a lot of swampy, flooded ground between them and their target, and the entire eastern flank of the American line was under German observation from the enemy held heights of Hill 192, five miles (8km) to the east. It was only directly north and east of St Lô that the US 29th Infantry Division had pushed its advance to within 2 miles (3km) of the town. Before the town could be captured and its road network opened up, these two issues would have to be resolved. The countryside the American forces had to attack through was a patchwork of small fields surrounded by thick earthen embankments with large hedgerows growing on top, all of which made defense easier and attack more difficult.

The Germans had used the previous two weeks of inaction to construct strong defenses and when the American Army resumed its attacks south they soon ran into stiff resistance. But the US soldiers had learned a lot about hedgerow fighting since they had landed in June, and new techniques were being employed to help the troops, such as the'Cullin Hedgerow Cutter' to help the tanks break through the hedgerows, as well as better and closer co-ordination of Air-support for the ground troops. Although progress was slow, it was steady and the Germans were gradually squeezed back.

The 29th Infantry Division attacked through the hedgerows to the northeast sector of Saint-Lô, near the Madeleine river, taking heavy casualties. On July 15, the 1st Battalion of the 116th Infantry Regiment, led by Major Sidney Bingham (called the "lost battalion"), unwittingly advanced ahead of other division elements and found itself isolated 1,000 yards east of Saint-Lô for an entire day without ammunition and with little food. They had 25 wounded, with only three nurses, and were surrounded by German forces. Planes were called in to drop plasma. Martainville hill was continuously showered by German artillery. On July 17, the 3rd Battalion, 116th Infantry, under Major Thomas D. Howie, joined up with the "lost battalion" around 4:30 in the morning. Hidden by dense vegetation, the 3rd Battalion had orders not to return enemy fire, and use only their bayonets. The mission was successful, but Howie was fatally wounded by a mortar shell explosion. Their position was then heavily attacked, preventing any further movement that day. On July 17, Captain William Puntenney, Major Howie's executive officer, requested artillery and air support to disperse the German troops. Short of munitions, still at the crossroads of the Madeleine, they found themselves at a mine depot, abandoned by the Germans. Meanwhile, the 115th Infantry Regiment passed through La Luzerne, deploying at the bottom of the Dollée Valley. On July 18, a company from the 116th established position along the Madeleine and the Germans retreated west to Rampan. An operations group was placed under the direction of General Norman Cota to form Task Force C. The tanks along the road to Isigny were followed by ranks of soldiers. They fought their way into the Bascule district of Saint-Lô, near the Saint-Croix (Holy Cross) church. When Major Howie died of wounds, room was needed in the ambulance for the living wounded, and his body was placed on the hood of the lead jeep, symbolically making him the first American soldier to enter the city. His body was then placed on some rubble and draped in a flag, in a photo that was widely circulated. Andy Rooney, who witnessed the event as a Stars and Stripes reporter, called this "one of the truly heartwarming and emotional scenes of a gruesome and frightful war".