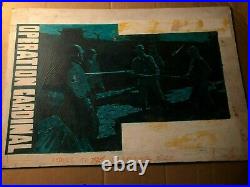 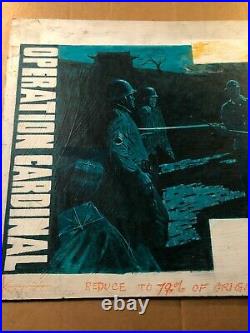 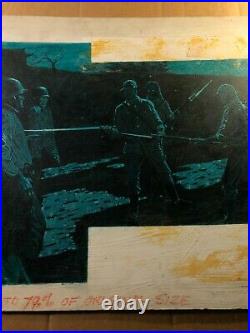 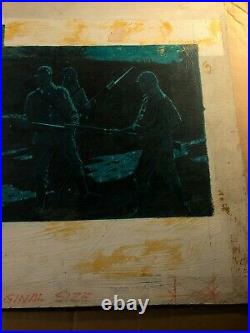 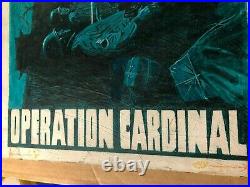 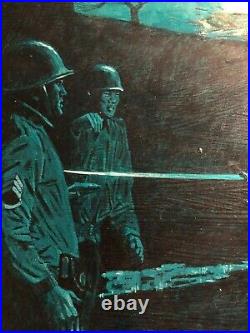 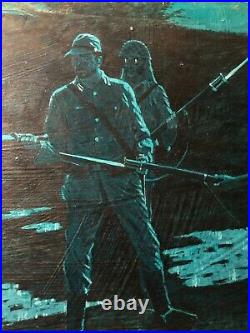 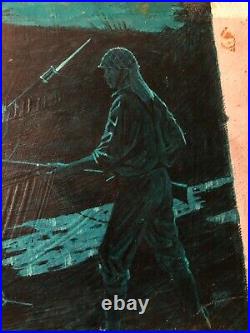 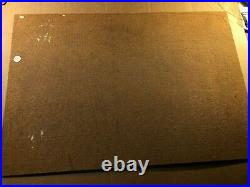 Here is a rare original published pulp illustration art painting on the subject of WWII Operation Cardinal, painted on masonite. Cardinal' was a US special forces operation to parachute an Office of Strategic Services team into the Mukden area of Manchukuo (Manchuria) at the time of Japans collapse to rescue Allied prisoners of war held in the area (16 August/mid-September 1945). Operating in a situation in which law and order had disappeared as the Japanese disintegrated as they awaited the arrival n 20 August of the first Soviets in'Avgust Burii', the OSS team had to use considerable military and diplomatic skill to achieve its task.

The team was parachuted into the area of Hoten from a Consolidated B-24 Liberator, and comprised six men led by Major James T. Hennessy, and these were reinforced on 20 August by three more men flown into the airfield at Mukden. After achieving its humanitarian mission, the team was ordered to remain in the Mukden area, until removed by the Soviets, and undertake its secondary mission of intelligence gathering. Witnesses to the beginning of the Cold War area in eastern Asia, the team provided intelligence which began to revealed the strength of the Chinese communist movement and forces (8th Route Army) in Manchuria.

The two camps in the area held more than 1,673 military and civilian prisoners, comprising about 1,300 Americans, 240 British and about 135 of other nationalities including 45 civilians, most of them Belgian. Among the prisoners of war recovered by'Cardinal' were the US Lieutenant General Jonathan M. Wainwright, Major General George M.