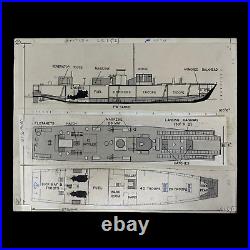 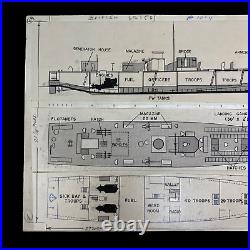 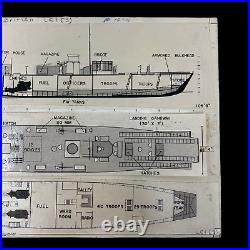 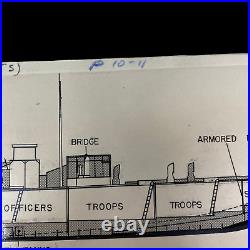 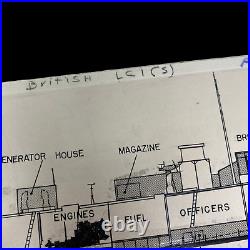 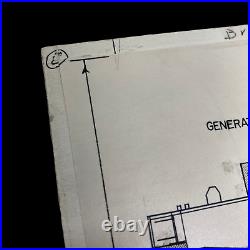 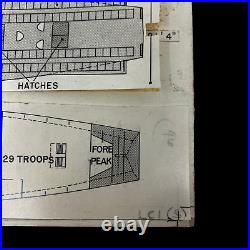 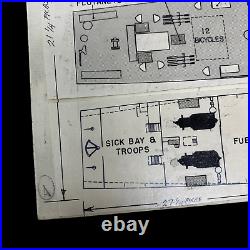 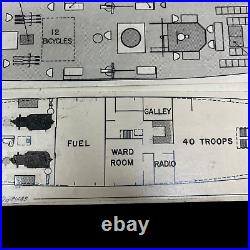 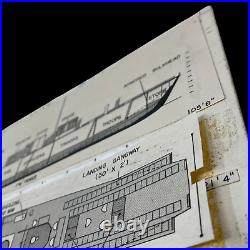 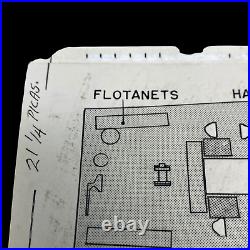 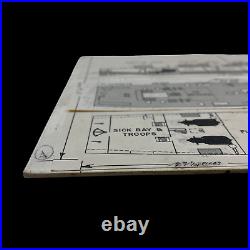 At the beginning of World War II, when France fell to Nazi Germany, Britain realized that the war against Adolf Hitler would have to be an amphibious war, since the ports of France were no longer available for an assault against the Third Reich. If Britain was to counterattack the Nazis, they would have to do it the hard way-putting ashore large groups of men under heavy opposition.

As a solution, the British came up with three new types of landing craft to meet this need. What makes this WWII LCI blueprint so rare is the heavy use and design marks. The Landing Craft Infantry (LCI) were developed in response to a British request for a vessel capable of carrying and landing substantially more troops than their smaller Landing Craft Assault (LCA). The LCI carried passengers, but could not transport vehicles.

LCIs were 158 feet long and 23 feet, 3 inches wide at the middle. They typically had a crew of 24-60 sailors, and carried 200 soldiers, who descended from ramps on each side of the craft during landings. LCIs were not originally designed for cross-ocean journeys, but did so out of necessity and urgency during WWII. They sailed from shipyards in the United States to the European and Pacific Theatres. Their flat-bottom hulls were designed for beaching, which meant the men aboard felt every wave, and many sailors and soldiers ended up seasick non-stop.

The hull or skin was made of a quarter-inch steel plate. LCIs were propelled using two sets of quad General Motors 6-cylinder diesel engines (8 engines total). LCIs didn't share the limelight like the more glamorous aircraft carriers, battleships and destroyers. In fact, they earned the name "Waterbug Navy, " when an admiral looked down from his battleship and watched the LCI's down below scurrying back and forth, and commented that they looked like a bunch of waterbugs. In doing so, they suffered enormous casualties. To the sailors manning these awkward craft, they were known as the "Elsie Item" - "Elsie" representing "LC" and "Item" being the phonetic alphabet word for I. However, the necessities of war required the LCIs to prove their sea-worthiness, as those "Lousy Crate Indeeds" crossed both the Atlantic and Pacific Oceans in the early days of World War II.

This item is in the category "Collectibles\Militaria\WW II (1939-45)\Original Period Items\Great Britain\Personal, Field Gear". The seller is "premierrelics" and is located in this country: US. This item can be shipped worldwide.