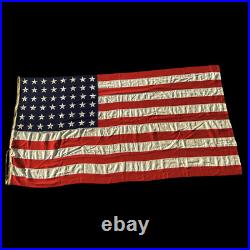 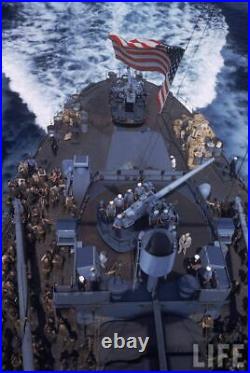 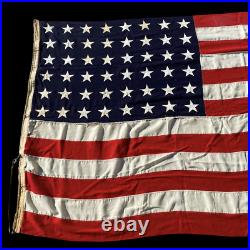 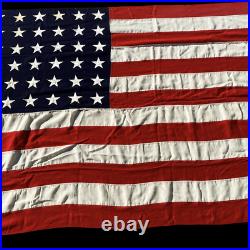 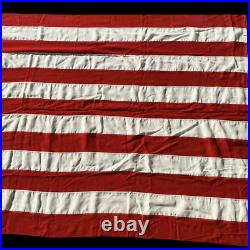 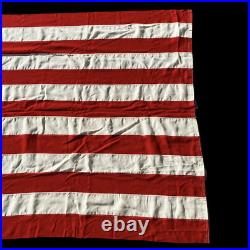 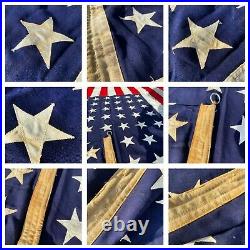 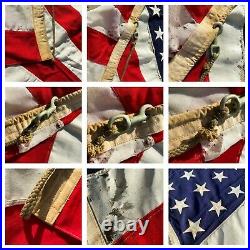 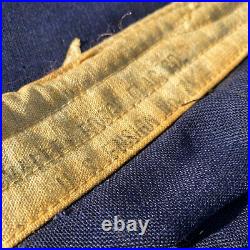 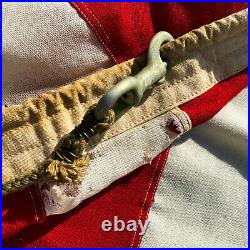 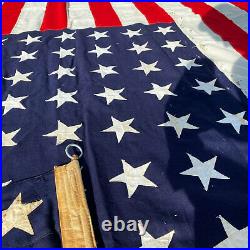 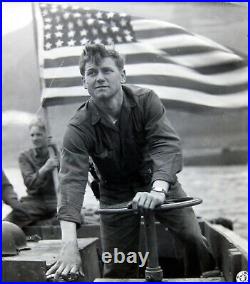 Size : 59 x 122 inches. (4 feet 9 inches x 10 feet 2 inches). Since World War II, Valley Forge American flags have been flown by the armed forces in many American wars, conflicts and battles. During WWII the Valley Forge flag was classified by the U.

Navy as the official American flag of the Pacific Fleet. This rare'salty' WWII U. Navy Flag was made by the famous Valley Forge Flag Company and is marked U.

This WWII Naval flag is in fair to good condition and is used, worn and ocean/sun stained with frayed sections where the wind has frayed the cloth. There are many documented uses of the Valley Forge ensign No. The flag has a heavy duty wool bunting with sewn stripes & stars, finished with a roped canvas header and a ring, lead-line and brass snap. The ensign is marked in black on the obverse hoist. There is no shipyard repair to the flag and still contains its original damaged use marks and frayed cloth.

Famous used of Valley Forge flag during WWII. The famous flag raised by five Marines and one Navy corpsman on Feb.

23, 1945 on Mount Suribachi in Iwo Jima, was manufactured by Valley Forge. On this date in the battle of Iwo Jima, Marines took control of Mount Suribachi, and the assault platoon raised a small American flag in victory. Later that day other troops lowered the small flag to raise a larger one, and news photographer Joe Rosenthal captured the moment in what would become an memorable, Pulitzer prize winning photograph. The flag raisers were Michael Stack, Harlon Block, Franklin Sousley, John Bradley, Ira Hayes and Rene Gagnon.

The larger Iwo Jima flag is now on display at the National Museum of the Marine Corps in Triangle, Virginia. Between July 1937 and April 1945, 250,000 people from all countries of Europe were imprisoned at Buchenwald Concentration Camp in Germany by the Nazi regime. These prisoners, who were subjected to forced labor, medical experimentation, severe torture and death, consisted of Jewish people, political prisoners, criminals, Jehovah's Witnesses, Prisoners of War, foreign forced laborers, German military deserters, resistance fighters, and former government officials of German-occupied countries. Including its 88 sub-camps across Germany, Buchenwald was one of the largest concentration camps created by the Nazis.

On April 11, 1945, prisoners seized the camp awaiting liberation by invading U. Soldiers liberated more than 20,000 prisoners, and a Valley Forge American flag was raised as a symbol of the prisoners' freedom. On June 6th, 1944, D-Day, Ste. Mère-Église in Normandy, France was liberated by Lieutenant-Colonel Edward C. Mère-Église was the first French town to be liberated, and Krause raised an American flag manufactured by Valley Forge over the town.

The flag, which was also flown in the liberation of Naples in 1943, was given to the town by Krause's wife after his death. It is kept in the town hall. Mère-Église was made famous by paratrooper John Steel, who landed on the church, entangling his parachute in the steeple. He was cut down and taken prisoner by the Germans and later released by the Americans. An effigy of John Steel is suspended on the church steeple today.

A Valley Forge flag was raised in pursuit of freedom on Omaha Beach in Normandy. Omaha Beach was one of five landing beaches, codenamed by the Allied Expeditionary Forces in the Normandy Invasion, a.

" The invasion did not run smoothly, and the high death toll of more than 2,000 people gave the beach the name "Bloody Omaha. It was one of the most difficult assault landings in military history, but its success was important to the success of the entire Allied Invasion. Eventually the beach was secured. Complete the journey to the beach. Navy committed a wide variety of AKAs to combat in World War II, carrying supplies and equipment to support the assault troops in their APAs. They carried some of the same types of landing craft as APAs, most notably LCVPs. Maritime Commission cargo designs, APAs were intended to deliver an infantry regiment to the waters off a hostile beach.

Where its assault craft would be lowered and deploy. By the end of 1944 the U. Navy listed some eighty-five APAs, including those still being built by the Maritime Commission. Anthony (APA 72), was lost to German mines. Essentially a seagoing dry dock, the LSD was the largest amphibious assault vessel of World War II.

LSDs could be flooded at the stern to permit landing craft to deploy directly into the water-as many as three LCTs, fourteen LCMs, or some forty LVTs or DUKWs. LSDs were first commissioned in 1943, displacing 4,500 tons light load, 458 feet long, with a 72-foot beam. They were rated at fifteen knots.

Three LSDs were involved in Overlord. Navy's APA, were capable of carrying troops and equipment for disembarking into landing craft.

Forty-five LSIs were assigned to the Normandy operation in four versions, (H), (L), (M), and (S). During planning for Overlord, British prime minister Winston Churchill confided to his diary,''The destinies of two great empires [are] seemingly tied up in some god damned things called LSTs.

Trucks, tanks, and other vehicles were carried in the so-called tank deck, while smaller landing craft could be carried on the top deck. Occasionally one LCT was carried on deck for offloading at the destination. LSTs displaced 1,490 to 1,650 tons light and 3,300 to 3,700 tons loaded, measuring 328 feet long with fifty-foot beams. They were rated at ten knots, prompting LST sailors to joke that they rode''Large, Slow Targets. Navy LSTs were sunk in Operation Tiger and five more off Normandy during Overlord.

Following seizure of the beaches, 236 LSTs brought heavy equipment ashore, including badly needed tanks. Thus, Overlord used almost two-thirds of all LSTs available to Allied fleet units worldwide, excluding ninetyodd recently completed on the U. Only twenty-four were on hand in the Mediterranean (all but two crewed by Americans), while the U. Pacific Fleet deployed 102 for operations against the Japanese.