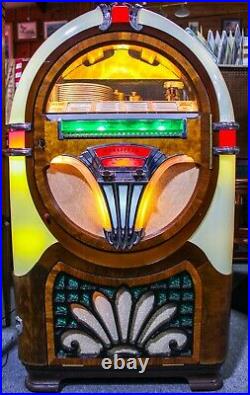 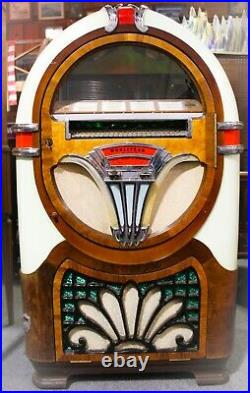 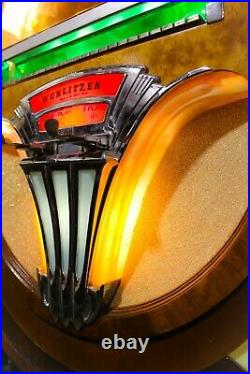 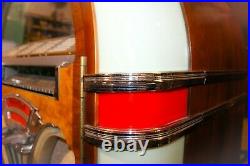 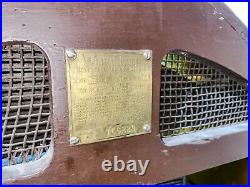 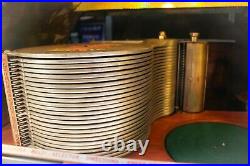 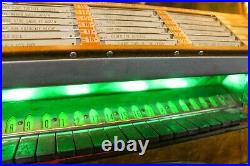 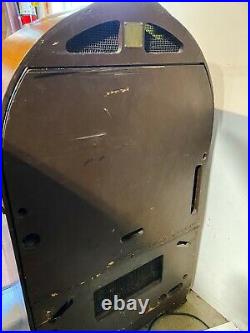 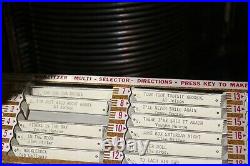 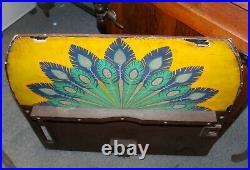 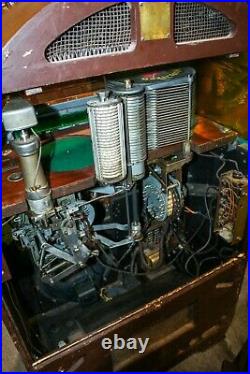 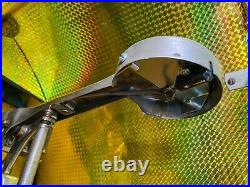 The door panel has two curved bubbler tubes and two coin slides for nickels and quarters under the keyboard styles selector. There is a shell carved grill over the speaker in the base. This machine plays 24 tunes and is operated by coin mechanism.

Signed with a metal tag on the back with model number 750-E and matching serial number 766229. This jukebox has been tested and the credit relay needs minor work, but otherwise the machine functions when the play lever is tripped manually. Cosmetically it is in beautiful, original condition. It measures 56" high x 33" wide x 24 deep.

Some history on this jukebox. "This is a classic of the "Golden Age of jukeboxes. The most compact of the full-size Wurlitzers, it features multicolored illuminated plastics and two curved bubble tubes in the center grill to give it'animation,' adding to the eye-appeal. Made in 1941 , it was the first Wurlitzer to feature the domed cathedral top that was to be the standard for the rest of the decade. A choice of 24 selections was offered, with the 78rpm records stacked in trays on the left side of the record compartment. The selected record swings out while the turntable rises up from below to bring it up to the level of the tonearm. Two versions of the Wurlitzer 750 were made. The style pictured here used a mechanical selector.

A patron would select the records he wanted to hear, then insert enough coins to play the selections. The problem was that any subsequent person could simply lift up the selection key to cancel it, and choose a different record, for which the first patron had already paid.

This "selection theft" resulted in many confrontations. A total of 6,411 of these mechanical selector 750s were produced. Wurlitzer then came up with a more modern version, called the 750E (for electric). This had an electric selector mechanism which required that the patron first insert a coin, then make their selections. These could not be overridden by others so it eliminated a pesky problem that had gone on for years.

All new Wurlitzers thereafter used the electric selector. Almost twice as many electric selector 750s were made versus the mechanical version (about 12,000). Many of our buyers have had great experiences finding a shipper on uShip. Please message for more information. The item "RARE Wurlitzer Model 750-E Jukebox 1941" is in sale since Tuesday, November 10, 2020.

This item is in the category "Collectibles\Arcade, Jukeboxes & Pinball\Jukeboxes\Machines". The seller is "powersurplustreasure" and is located in Athens, Georgia. This item can't be shipped, the buyer must pick up the item.