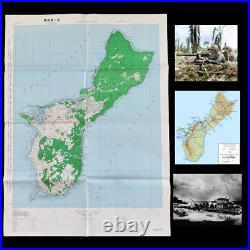 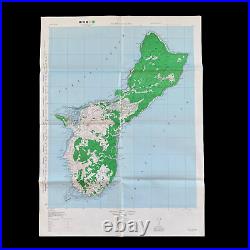 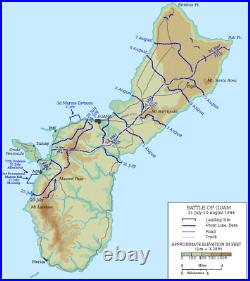 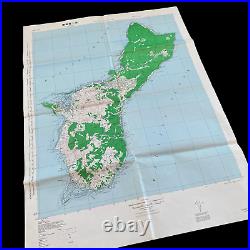 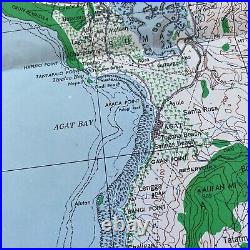 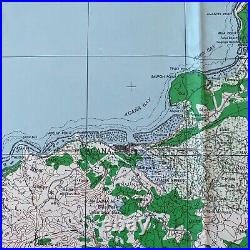 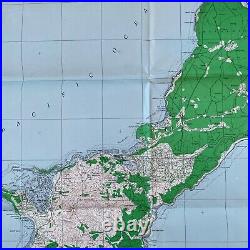 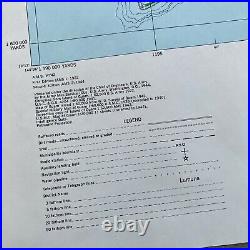 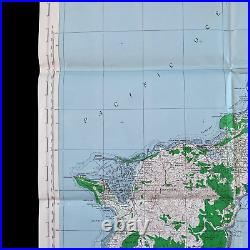 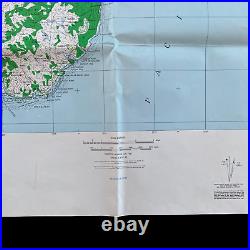 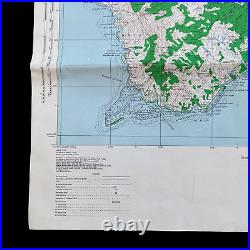 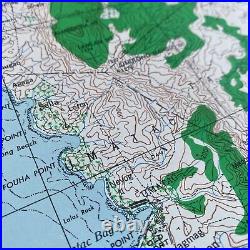 This incredible and very rare full island invasion edition titled "ISLAND OF GUAM" is a scarce "SECOND EDITION - AMS 3" version printed in April 1944 (3 months before the Guam D-Day amphibious landings). This map was created and meant to be as a strategic planning and operational combat map for the entire invasion lasting from July to August 1944 and shows all the D-Day beachhead landing locations of the 3rd Marine Division, 77th Infantry Division and 1st Provisional Marine Brigade. What makes this full-scale invasion map so rare is the extensively detailed legend that shows coastal fathom lines useful for the Army and Marine invasion force included both Marine and Army units from General Geiger's III Amphibious Corps, in all 55,000 strong. This map was revised using the most updated intelligence, aerial intelligence projections, and various special maps from the U.

To show the most accurate island contours, surface roads, dirt roads, trails, radio stations, and Japanese airfields vital to the strategical military operations on the island. Guam is the largest of the Marianas, 30 miles (48 km) long and 9 miles (14 km) wide. It had been a United States possession since its capture from Spain in 1898 until it was captured by the Japanese on December 10, 1941, following the Attack on Pearl Harbor. It was not as heavily fortified as the other Mariana Islands such as Saipan had been Japanese possessions since the end of World War I, but by 1944 it had a large Japanese garrison.

The Allied plan for the invasion of the Marianas called for heavy preliminary bombardment, first by carrier aircraft and planes based in the Marshall Islands to the east, then once air superiority was gained, close bombardment by battleships. The invasion of Saipan was scheduled for June 15, 1944, with landings on Guam tentatively set for June 18. The original timetable was optimistic, however. A large Japanese carrier attack and stubborn resistance by the unexpectedly large garrison on Saipan led to the invasion of Guam being postponed for a month. Guam, ringed by reefs, cliffs, and heavy surf, presents a formidable challenge for an attacker. But despite the obstacles, on July 21, the Americans landed on both sides of the Orote peninsula on the western side of Guam, planning to cut off the airfield.

The 3rd Marine Division landed near Agana to the north of Orote at 08:28, and the 1st Provisional Marine Brigade landed near Agat to the south. Japanese artillery sank 20 LVTs, and inflicted heavy casualties on the Americans, especially on the 1st Provisional Marine Brigade, but by 09:00 men and tanks were ashore at both beaches. The 77th Infantry Division had a more difficult landing. Lacking amphibious vehicles, they had to wade ashore from the edge of the reef where they were dropped by their landing craft. The men stationed in the two beachheads were pinned down by vicious Japanese fire, making initial progress inland quite slow.

By nightfall the Americans had established beachheads about 2,000 meters deep. [1] Japanese counter-attacks were made throughout the first few days of the battle, mostly at night, using infiltration tactics. Several times they penetrated the American defenses and were driven back with heavy loss of men and equipment. Lieutenant General Takeshi Takashina was killed on July 28, and Lieutenant General Hideyoshi Obata took over the command of the defenders.

Supply was very difficult for the Americans in the first days of the battle. However, the two beachheads were joined up on July 25, and the Orote airfield and Apra harbor were captured by July 30. The counterattacks against the American beachheads, as well as the fierce fighting, had exhausted the Japanese. At the start of August they were running out of food and ammunition and had only a handful of tanks left. Obata withdrew his troops from the south of Guam, planning to make a stand in the mountainous central and northern part of the island.

But with resupply and reinforcement impossible because of American control of the sea and air around Guam, he could hope to do no more than delay the inevitable defeat for a few days. Rain and thick jungle made conditions difficult for the Americans, but after an engagement at Mount Barrigada from August 2 to August 4, the Japanese line collapsed; the rest of the battle was a pursuit to the north. As in other battles of the Pacific War, the Japanese refused to surrender, and almost all were killed.

On August 10, after 3 long weeks of bloody and ferocious fighting, organized Japanese resistance ended, and Guam was declared secure. The next day, Obata committed ritual suicide. A few Japanese soldiers held out in the jungle. On December 8, 1945, three U.

Marines were ambushed and killed. On January 24, 1972, Sergeant Shoichi Yokoi was discovered by hunters. He had lived alone in a cave for 27 years. After the battle, Guam was turned into a base for Allied operations. Five large airfields were built by the Seabees, and B-29 bombers flew from the island to attack targets in the Western Pacific and on mainland Japan.

Marines were awarded the Medal of Honor for their heroic actions during the Battle of Guam: PFC Luther Skaggs Jr. PFC Frank Witek (posthumously), PFC Leonard F. Mason (posthumously), and Captain (later General) Louis H. This item is in the category "Collectibles\Militaria\WW II (1939-45)\Original Period Items\United States\Field Gear, Equipment". The seller is "premierrelics" and is located in this country: US.