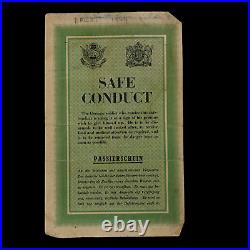 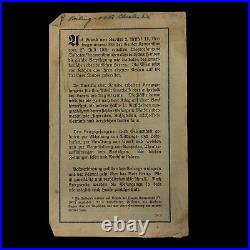 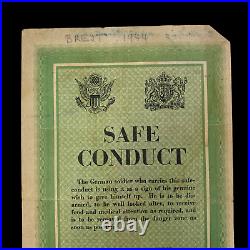 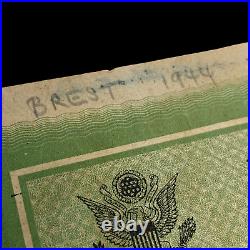 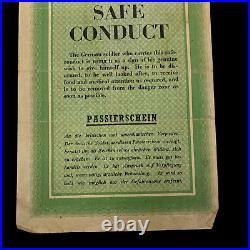 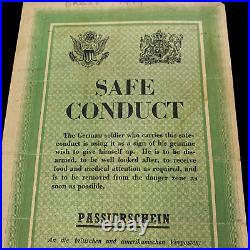 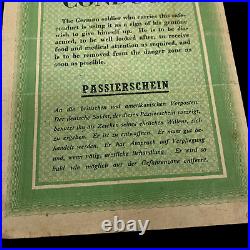 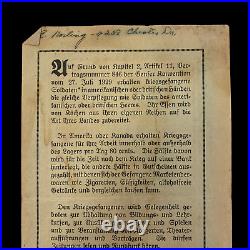 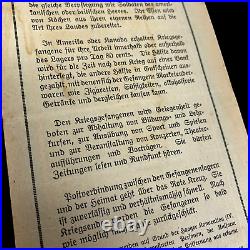 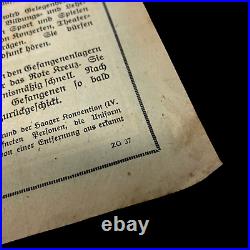 The ZG37 leaflet was only dropped in France from August to September 1944. This incredibly rare and museum-grade WWII Allied propaganda leaflet was dropped over German positions during the Battle for Brittany (Operation Cobra) which took place between August and October 1944. This very scare GREEN COLOR German surrender leaflet was an early WWII surrender leaflet that was changed quickly with the help of D-Day and Normandy captured German P. This specific leaflet was dropped after the Allies broke out of Normandy in June 1944. Brest became targeted for its well developed ports which the Allies intended to use, whilst also stopping their continued use by German U-boats.

This specific propaganda leaflet has even more history as it was kept as a war souvenir by Major Victor A. Norling who served in the HQ European Theater of Operations from Aug 29th, 1942 to November 9th, 1945. This propaganda leaflet shows amazing theater wear while still maintaining an incredible condition. Printed in Waterlows of London, this safe-conduct surrender leaflet was a combined US-British SHAEF leaflet that was airdropped on German positions. First produced and distributed soon after the Normandy invasion, the early Passierschein contained the seal of the United States and the British royal crest; its text, in English and German, directed Allied frontline troops to give good treatment to surrendering Germans.

As the campaign continued, a series of improvements was made in the leaflet, based on results of prisoner-of-war interviews. Martin Herz recalled that by the time the Passierschein went into its sixth printing, the following changes had been made. (a) the German text was placed above the English.

(b) a note specifically stated that the English text was a translation of the German. (c) General Eisenhower's signature was added.

(d) his name was spelled out after it had been learned Germans did not recognize his handwriting; (e) the leaflet color was changed from green to a more conspicuous red. (f) under the word "Safe Conduct, " a note was added stating that the document was valid for one or several bearers. Continuous interrogations of the German prisoners had netted these improvements. FULL translation of back leaflet page.

In accordance with Chapter 2, Article 11, Treaty Number 846 of the Geneva Convention of July 27, 1929, captured soldiers in American or British hands receive the same food as soldiers of the American or British Armies. Their food is prepared in their own manner, from cooks taken from their ranks.

In America or Canada, prisoners of war receive 80 cents a day for work inside or outside the camp. Prisoners of war are afforded facilities for the holding of courses of instruction and study, for the performances of sports and games, the holding of concerts, theatre performances and lectures. They may read newspapers and listen to the radio. According to The Hague Convention (IV, 1907) the following are considered as soldiers: All armed persons wearing uniforms or a badge which can be clearly distinguished from a distance. Operation COBRA, the American breakout from Normandy at the end of July 1944, completely changed the dynamics of the fighting in western Europe. In its aftermath, Allied forces would partially encircle and almost completely destroy German forces in Normandy; and American tanks under General George S. Patton would drive across France to the German border, leading to the liberation of Paris.

With all of these dramatic events taking place, few noticed that one of the war's bloodiest and most important operations was taking place far to the west, at the French port city of Brest-few, that is, except for the men who fought there in the sweltering summer days of August-September 1944. Those who survived would never forget. The success of Operation COBRA was followed in short order by the penetration of American mobile forces into Brittany. Their primary objective was to capture the peninsula's several important harbor facilities.

Although General "Lightning" Joe Collins's VII Corps had captured. A month earlier, the Germans had so thoroughly demolished the port that months would pass before it was again operational. Securing another port, hopefully intact, would do a great deal to reduce the supply bottleneck still running through the Normandy beaches, and hopefully fuel Patton's tanks. The Germans knew this as well, however, and had done a great deal to fortify and garrison the most important harbors in Brittany-especially Brest.

Paratroop General Hermann-Bernhard Ramcke, a wily veteran who had served under General Erwin Rommel in North Africa, commanded the 40,000-man garrison in Brest, which Adolf Hitler had declared a fortress to be defended to the last bullet. Two infantry divisions and one parachute division with associated elements, including ample artillery and machine guns, defended a formidable network of bunkers, pillboxes, emplacements, and trenches, all placed for mutual support. These were arrayed in exterior and interior lines, with the intention of eventually drawing any attackers into the city for house-to-house fighting and heavy casualties. To ensure that the garrison would be able to hold on to the city almost indefinitely, without having to feed civilians, the Germans had forcibly evacuated the population.

When American forces entered Brittany, Patton ordered his 6th Armored Division to rush ahead and capture Brest, hoping that a lightning strike would find the Germans unprepared. The next two weeks passed slowly as American forces slowly encircled the city and the Germans further improved their defenses.

American infantrymen found the German defenses incredibly difficult to crack, and the fighting was brutal. Far from lying supine in their defenses, the Germans struck back ferociously wherever possible.

Sergeant John McVeigh, a native of Philadelphia and draftee with the 2nd Division's 23rd Infantry Regiment, fought for three days before his platoon took up positions behind a hedge just after dusk on August 29. Before the Americans had time to dig in, German infantry suddenly counterattacked and came close to overrunning the position.

Rallying his men, McVeigh stood up in view of the enemy and directed accurate fire against them. Then, drawing a knife, he charged the attacking Germans, killing one of them before the enemy shot him down.

McVeigh's action gave his men time to reorganize and hold off the enemy attack, and earned him a posthumous. Heavy casualties soon forced Middleton to shift from all-out assaults on the German positions to small but intense bite-and-hold operations, in which infantry took out one strongpoint at a time and then held on grimly against German counterattacks. In fighting reminiscent of island combat against the Japanese in the Pacific, American infantry used flamethrowers, satchel charges, and concentrated small-arms fire to move slowly from point to point. Unfortunately, rain and fog limited airstrikes, and Middleton's artillery began running out of ammunition.

Soon days turned into weeks as American forces crept closer to the beleaguered city. In early September, finally, after General Dwight D. Eisenhower authorized his forces to "utilize maximum number of aircraft which can be effectively employed in support of this operation, " the hard-fighting infantry captured a number of important strongpoints in the German perimeter, which began crumbling inward. On September 8, after carefully marshaling his troops and supplies, Middleton launched his divisions in a coordinated assault that ended with the American infantry surging into the streets of Brest. But the fighting was far from over.

Moving toward the city center, GIs found it impossible to move in the open because of German anti-tank guns and machine guns sited to sweep the streets. This forced the infantry to use satchel charges to blast holes in walls to move from house to house.

On September 10, troops of the 8th Division encountered a new obstacle when they reached the old city wall, 25-35 feet high with a dry moat 15-25 feet deep. Heavy artillery was brought up to blast holes in the wall at point-blank range, but they were unable to blow gaps large enough for the infantry to break through.

After brutal casualties, the 8th Division was withdrawn from the fighting, leaving the 2nd and 29th Divisions to carry on. As the fighting intensified, American engineers worked to clear minefields and blow up strongpoints one at a time.

At the cost of almost 10,000 casualties, the Americans had killed or captured the entire German garrison. But Brest, along with its harbor facilities, was utterly destroyed.