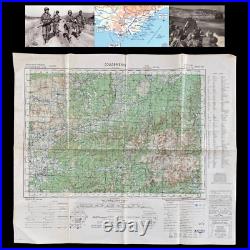 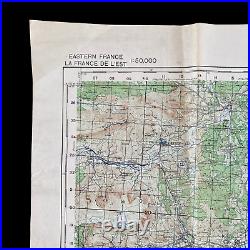 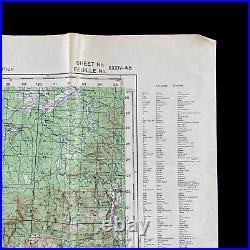 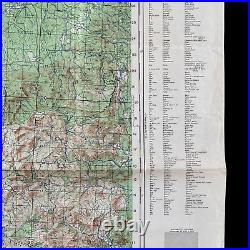 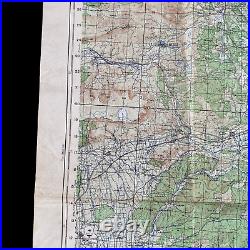 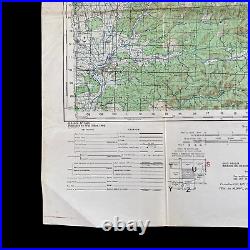 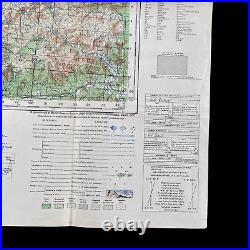 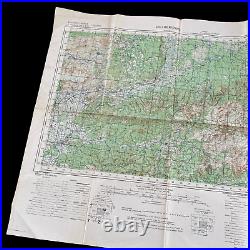 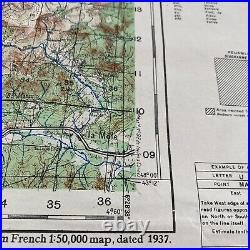 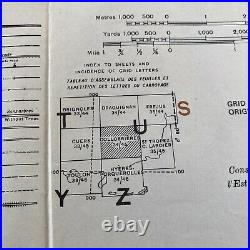 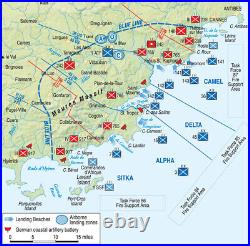 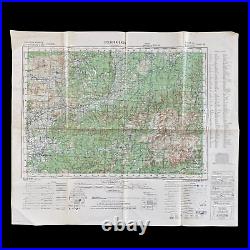 The original plans for the 1944 Allied invasion of Europe called for two massive invasions of France. The first, Operation Overlord, in Normandy, was the D-Day so familiar to the world. The second would be an "anvil" on which the Overlord "hammer" would resound, in the south of France, trapping the German war machine between the two massive invasions. The Luftwaffe had 186 airplanes, and the Kriegsmarine could respond to invasion with 28 torpedo boats, nine submarines, five destroyers, and 15 patrol craft. This incredible rare 1944 WWII combat operations map was used by infantry and armored divisions during the infamous D-Day landings of southern France during Operation Dragoon. Dated 1944 this assault map is titled "COLLOBRIERES" which was one of primary targets of Allies after their amphibious landings and breakout from the beachhead. COLLOBRIERES was located just inland of the amphibious beach landing locations of ROMEO BEACH and GARBO BEACH. This map would have been used extensively to attack and defend against German resistance in the region. France's Second D-Day: Operation Dragoon and the Invasion of Southern France. Often overshadowed by the Normandy Landings, the U.

Seventh Army's amphibious invasion of southern France on August 15, 1944 and the ensuing operations were nonetheless critical to the Allied victory in the European theater of World War II. Following six weeks of aerial bombardment, the infantry, armor, airborne, and commando forces of Maj. Lucian Truscott's VI Corps assaulted German positions along a 45-mile stretch of French coastline from St. Preceded by the commandos of the 1.

Special Service Force and the paratroopers of the 1. Airborne Task Force, the assault battalions of the 3. Infantry divisions landed on the French Riviera. The American forces secured the beachhead and pushed inland, dislodging the defenders of the German 19. Within 48 hours, American units penetrated 20 miles in some sectors.

The VI Corps then turned west toward the Rhône River valley. Meanwhile, the French Armée B came ashore over the landing beaches.

The Free French forces, under the command of Gen. Jean de Lattre de Tassigny, had the primary objective of the campaign - to capture the ports of Toulon and Marseille. Together, these French and American units formed the Seventh Army under the command of Lt. The combined Franco-American force continued its assault toward Marseille and the Rhône River, forcing the German Nineteenth Army into a fighting withdrawal. As the French prepared their attack on Marseille, the Americans turned north up the Rhône Valley. One hundred miles north of Marseille, the town of Montélimar presented a major obstacle; the Germans prepared their defense as a bottleneck to slow down the rapid Allied advance. After a fierce struggle, the 36.

Division forced the German units to withdraw, Montélimar fell, and the rout was on. The campaign became a race northward up the Rhône valley. By September 7, a combat patrol made contact with the French 2. Armored Division operating west of Dijon. The French, in collaboration with Lt.

Third Army, were advancing east toward the border with Germany. With the full link up of Allied armies completed by September 10, the Seventh Army turned northeast toward Strasbourg. The drive to the German frontier began, and Operation Dragoon ended. Over the course of the offensive, the Allies drove 400 miles into France in three weeks and liberated 10,000 square miles of French territory while inflicting 143,250 German casualties. Although launched with reluctant British participation, the campaign through southern France provided crucial support to the main Allied thrust against Germany, and remains one of the most successful-and often overlooked-operations of World War II. This item is in the category "Collectibles\Militaria\WW II (1939-45)\Original Period Items\United States\Field Gear, Equipment". The seller is "premierrelics" and is located in this country: US. This item can be shipped worldwide.