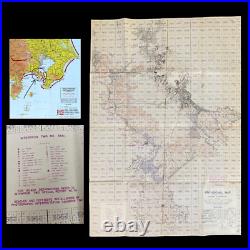 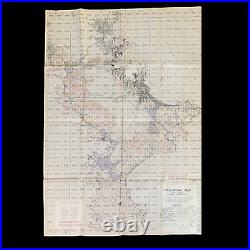 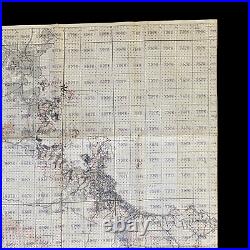 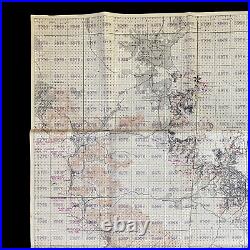 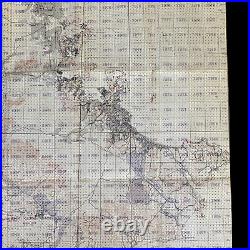 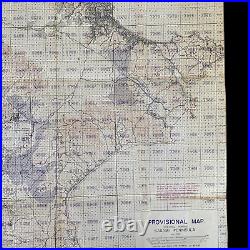 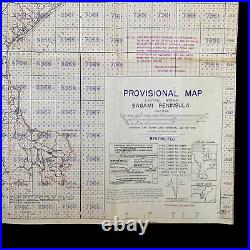 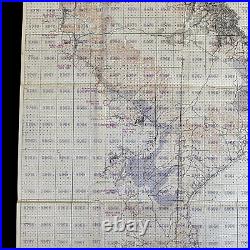 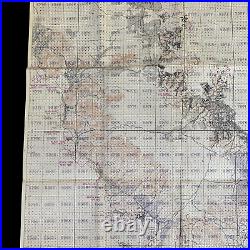 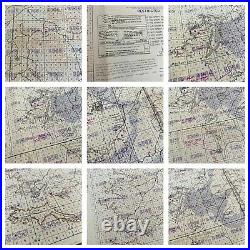 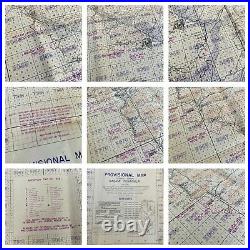 This is the only Operation Coronet High Command D-Day Sagami Peninsula map known to exist. The plan to invade the Japanese home islands in 1945 and 1946 would have been the deadliest campaign in military history costing nearly 1 million Allied dead and up to 10 million Japanese. Printed in August of 1945 (two weeks after the atomic bombs were dropped on Hiroshima and Nagasaki) this is a one-of-one museum-grade WWII artifact showing 13 of the amphibious beachhead landing sites for the invasion of Japanese as to be used in Operation Coronet. This RESTRICTED full view provision map of central Honshu shows the "Sagami Peninsula" where the US 8th Army (Eichelberger) comprised of the 6th Infantry Division and 2nd Armored Division was to land. This map was solely meant for high-ranking generals, commanders, and officers in strategic planning for Operation Downfall and Operation Coronet.

Operation Coronet, the invasion of Honshu at the Kanto Plain south of the capital, was to begin on "Y-Day", which was tentatively scheduled for 1 March 1946. Coronet would have been even larger than Olympic, with up to 45 U. Divisions assigned for both the initial landing and follow-up The Overlord invasion of Normandy, by comparison, deployed 12 divisions in the initial landings. In the initial stage, the First Army would have invaded at Kujukuri Beach, on the Boso Peninsula, while the Eighth Army invaded at Hiratsuka, on Sagami Bay; these armies would have comprised 25 divisions between them. Later, a follow-up force of up to 20 additional U.

Divisions and up to 5 or more British Commonwealth divisions would have landed as reinforcements. The Allied forces would then have driven north and inland, encircling Tokyo and pressing on toward Nagano.

This map shows beaches and Japanese defensive installations by photographic interpretation squadron two. With a full legend detailing Japanese defenses and tunnels, this map shows a full coverage diagram for the invasion. What makes this map even more interesting is the notation "This map hastily compiled in approximately 36 hours". The plans for "Downfall" were first developed early in 1945 by the Combined Chiefs of Staff at the Argonaut Conference held on the tiny island of Malta in the Mediterranean. On 9 February, just a few days before the historic Three-Power meeting at Yalta, President Roosevelt and Prime Minister Churchill were informed of the conclusions reached at Argonaut. At that time, the strategic concept of future operations in the Pacific embodied the defeat of Japan within eighteen months after Germany's surrender and included the following series of proposed objectives. Following the Okinawa operation, to seize additional positions to intensify the blockade air bombardment of Japan in order to create a situation favorable to. An assault on Kyushu for the purpose of further reducing Japanese capabilities by containing and destroying major enemy forces and further intensifying the blockade and air bombardment in order to establish a tactical condition favorable to. The decisive invasion of the industrial heart of Japan through the Tokyo Plain. On 29 March, the U.

Joint Chiefs of Staff, working on the assumptions that the war in Europe would be over by 1 July 1945 and that the forthcoming Okinawa operation would be concluded by mid-August of 1945, set a tentative schedule for the invasion of Japan. The invasion plan was assigned the cover name "Downfall" and consisted of two main operations: "Olympic, " the preliminary assault on the southern island of Kyushu, which was slated for 1 December 1945, and "Coronet, " the subsequent landing on Honshu, which was scheduled for 1 March 1946.

It was proposed that forces already in the Pacific be used to the fullest extent possible in planning for the assault and follow-up phases of Olympic. " Reserve and follow-up divisions for "Coronet would be obtained by redeployment, either directly or via the United States, of troops and equipment from the European Theater. On 3 April 1945, the Joint Chiefs of Staff issued a directive in which General MacArthur was instructed to complete the necessary operations in Luzon and the rest of the Philippines, prepare for the occupation of North Borneo, and make plans and preparations for the campaign in Japan. The amphibious and aerial phases of the projected Homeland invasion.