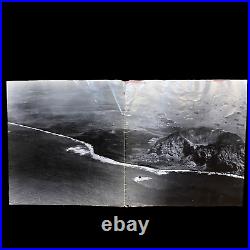 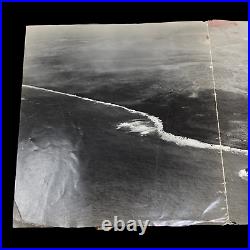 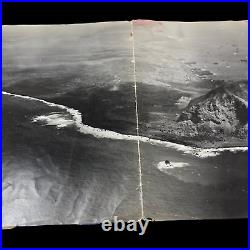 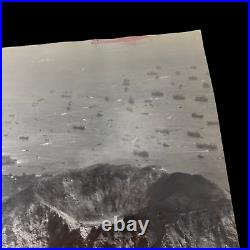 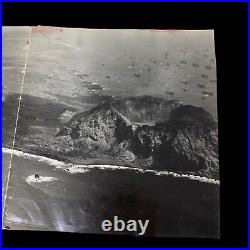 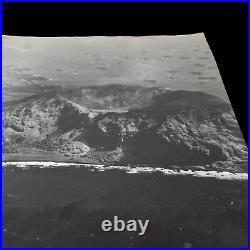 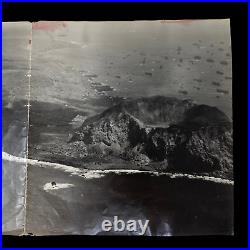 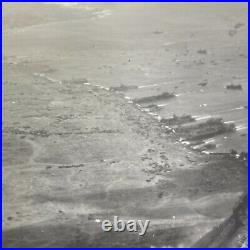 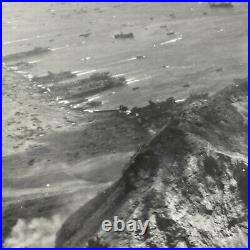 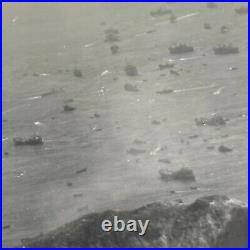 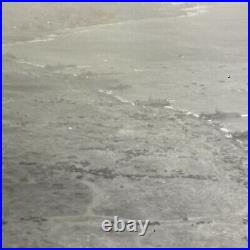 This large, incredibly rare, and museum-grade WWII Iwo Jima invasion aerial photograph shows the U. Marines amphibious landing on Iwo Jima. This invasion photograph was taken by a circling U. By the end of D-day, nearly 30,000 personnel had been landed on Iwo Jima despite rapidly deteriorating weather conditions, the difficult terrain, and stubborn, well-coordinated Japanese resistance. Although the Marines had managed to cross the island at its narrow width and had cut off Mount Suribachi, the day's planned phase line had not been reached while casualties mounted at an alarming rate. The beachhead remained concentrated in a triangular area roughly 4,000 yards long, and from 700 to 1,100 yards wide from north to south. Almost precisely at H-hour, 0900 on 19 February, the first assault wave, with 5th Marine Division units on the left and 4th Marine Division units to the right, landed on the assigned beach sectors. The Japanese held their fore until 1000, after the Marines' first wave was on the beaches and the covering naval gunfire had momentarily eased. The sudden, unexpected volume and accuracy of artillery and mortars clearly indicated that bombing and naval bombardment had not markedly affected the enemy. This had a devastating effect on the buildup on the beaches.

All of the sectors suffered casualties, although Green and Red beaches, flanked by Japanese positions on Mount Suribachi, and the Blue beaches, fronted by enemy emplaced in the cliffs of a rock quarry, were perhaps hardest hit. Further handicapping the Marines was the instable beach, composed of steep terraces of constantly shifting black sand, volcanic cinders, and ash.

This made digging in very difficult and bogged down wheeled and even tracked vehicles, causing pile-ups of men, amphibious tractors, tanks, and supplies at the waterline. These were subjected to constant Japanese artillery, mortar, and machine-gun fire. The steep beach gradient also caused a violent surf zone with which landing craft and tractors had to contend. These difficulties notwithstanding, the landings were successfully executed and, under cover of a rolling naval gunfire barrage and close air support mainly provided by Fifth Fleet's escort carriers, the Marines began moving off the beaches. The 5th Marine Division pushed to the northwestern shore in order to isolate Mount Suribachi, and accomplished this task within ninety minutes of the initial landings.

The 4th Marine Division's progress was much slower, however, as it proceeded toward the airfields. One of these lay directly in front of the Marines, but the second, more centrally located field, required a wheeling movement toward the northeast, which brought most of this division into a bowl-like area completely exposed to heavy Japanese fire. D+1 saw the landing of 3rd Marine Division, the corps reserve, and later taking up battle space between the two previously committed Marine divisions. Meanwhile, the 5th Division's 28th Marine Regiment began its assault of Mount Suribachi, which was garrisoned by 2,000 Japanese troops and extensively honeycombed with defensive positions and tunnels, one of them seven levels deep. Bolstered by reinforcements from 3rd Marine Division, other 5th Marine Division units and the 4th Marine Division slowly continued to force their way northwest and northeast.

Fifth Fleet aircraft continued to fly close-support missions, often dropping napalm on the deeply dug-in enemy. The Battle of Iwo Jima was an epic military campaign between U. Marines and the Imperial Army of Japan in early 1945. Located 750 miles off the coast of Japan, the island of Iwo Jima had three airfields that could serve as a staging facility for a potential invasion of mainland Japan. American forces invaded the island on February 19, 1945, and the ensuing Battle of Iwo Jima lasted for five weeks.

In some of the bloodiest fighting of World War II, it's believed that all but 200 or so of the 21,000 Japanese forces on the island were killed, as were almost 7,000 Marines. But once the fighting was over, the strategic value of Iwo Jima was called into question. This item is in the category "Collectibles\Militaria\WW II (1939-45)\Original Period Items\United States\Field Gear, Equipment". The seller is "premierrelics" and is located in this country: US. This item can be shipped worldwide.