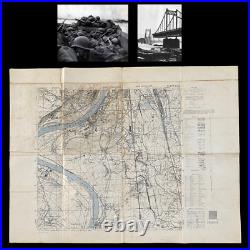 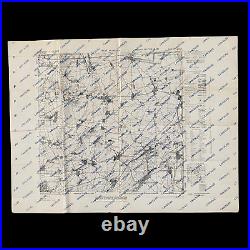 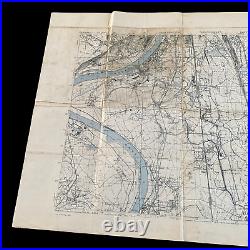 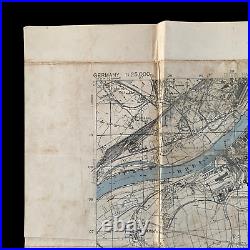 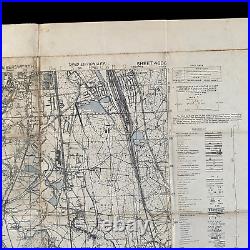 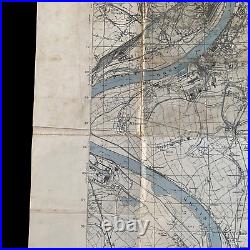 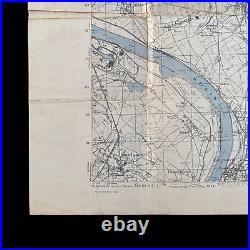 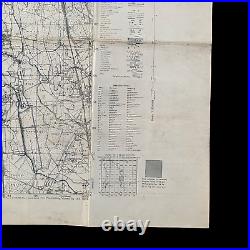 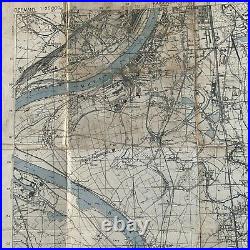 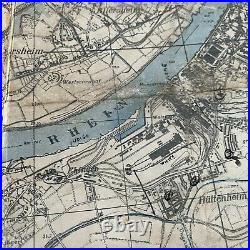 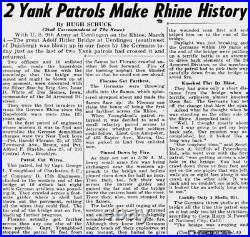 Please note that the two B&W newspaper clippings are. The first hand accounts of this area and battle as the Allies crossed this section of the Rhine River. This rare original WWII "RHINE RIVER" map was a special edition emergency field print done in-theater during the Rhineland Campaign by the 667th Engineers in February of 1945.

Printed on the back of a previously used combat map these emergency prints were done fast and as they were needed on discarded maps as the US and other Allied forces advanced through Germany and closer to the Rhine River. This map shows heavy combat use with soldier combat markings done after crossing the Rhine River with unknown color designations, hand-numbered buildings, and "X" marked objectives. Divisions approached the German town of.

Uerdingen (located just off the left of the map) Allied high command issued the critical mission to. Attempt to cross and sieze the Adolph Hitler Bridge before the retreating German Army and Paratroopers could destroy it and avoid an amphibious crossing of the Rhine. Located between the town of. Mündelheim the German's the Adolph Hitler Bridge would provide Allied armor divisions, infantry, and supplies to easily and quickly cross the Rhine.

After crossing Rhine the German fortified positions would be assaulted at Mündelheim, Serm, and Hüttenheim where Allies were getting battered heavily days prior. The Rhine is no ordinary river. About 766 miles in length, with an average width of about 1,300 feet, the generally north-flowing waterway also is exceptionally swift and deep. Since the days of the Roman Empire it has served as central Germany's traditional defense against invasion from the west. That remained the case in the first months of 1945.

Although Hitler's Reich hovered on the verge of total collapse, with its cities in ruins from Allied bombing raids and Soviet forces crashing in from the east, Germany's defenses along the Rhine River still held strong. Although American, British and French forces had occupied most of Germany west of the Rhine, they remained unable to cross the river into the Ruhr industrial center. Army Corps of Engineers deemed the river totally unfordable, even at low water; and the Germans had either destroyed or were prepared to destroy every significant bridge. More information about the actions on the Adolf Hitler bridge at Uerdingen Germany. The division hoped to capture the bridge Intact, and two days before we reached it Col.

Hinds announced a plan of using some captured Jerry tanks, fill them with Infantry and Engineers, take off across the bridge like we were retreating Jerries, than overpower the guards on the other side and secure the bridge. This fell through, though, and when we arrived at the Autobahn east of Krefeld we were meeting lots of resistance and could not get to the bridge.

We pulled back and went in from the south along the Rhine. I had my squad picked and during the afternoon we tried to get on the bridge, but they were fighting on our end of it so It wasn't possible. About 8:30 that night (3 March) I got the squad together again, some of our Infantry was holding the western end of the bridge, we went under the approach, crawled up some steps on its north side to get up on the bridge.

I dropped three guards at the end, and the other six and I went on out, cutting every wire we saw whether it looked like demolition or not. We cut six or seven wires. There was a 15 foot hole across the bridge about 100 yards out which would stop any tanks from crossing. We climbed over this hole on the stringers and went on out to the center of the bridge where we had to stop.

A fire on the other half of the bridge was burning the asphalt on the roadway, and a big warehouse over there was burning to. Jerry artillery and our own was landing on the far approach, and all around us, and already had weakened most of the supports. So we came back, getting in about 11:30 (2130), The krauts blew up the bridge about 5:00 the next morning. Two officers and 16 enlisted men, who made the hazardous crossing of the Rhine with the knowledge that the bridge was mined and might be blown up at any moment, were decorated with the Silver Star by Brig.

White of Des Moines, Iowa, commander of the 2d Armored Di-vision. They were the first invaders to cross the German Rhine since the Napoleonic wars more than 125 years ago.

In the first patrol of engineers whose mission it was to find and neutralize the German demolition charges were two New York boys - Pvt. Harold Florano, 25, of 1575 Townsend Ave. Staehle, also 25, of 310 Central Ave. This patrol, led by Capt.

Of Company D, 17th Engineers, climbed to the western end of the bridge at 10 o'clock last night while German artillery was pound-ing it. They crawled across a foot-wide girder where a shell had blown out the pavement, cutting all the wires they could find. The far end of the bridge was on fire, blocking further progress. Florano actually got farther across than any one else of- the two patrols. Stopped the patrol 75 feet from _. The flames but Florano crawled an-other 50 feet forward. Fire of the burning asphalt then blinded him so that he could not see ahead. The Germans were throwing shells into the flames, which splat-tered shrapnel about and made the flames flare up. So Florano can claim the honor of being the first and farthest across the Rhine. When Youngblood's patrol re-turned it was decided to send a small infantry patrol across to determine whether foot soldiers could follow.

Guy Amspoker, of 465 Rapier Ave. Was picked to lead five enlisted men. As they set out at 3:30 A. Heavy small arms fire was being exchanged near the western ap-proach to the bridge and bullets pinned them down for half an hour.

Then they, too, felt their way across the narrow girder and gained the far end of the bridge above the eastern bank of the river. There they, also, were stopped by the flames. Although they knew the Germans might touch off their explosives at any instant, they halted to give the wounded man first aid and helped him on to the end of the bridge. Daylight was just breaking and the Germans within 100 yards of the end of the bridge were putting up a terrific battle in an attempt to drive back elements of the 2d Armored Division, so the members of the patrol had to pick their way carefully down from the bridge to avoid fire. They had gone only a short dis-tance from the bridge when a terrific explosion almost knocked them flat. The Germans had set off the charge that blew the span.

Asked what he thought when he was standing on the other side of the Rhine. Amspoked said: Well, I thought mostly about how I was going to get my boys, back safe. But it looked like a long way back. " "Our toughest time, said Sergt.

Who went over with the first patrol. Was getting across a shell hole in the bridge.

You had to crawl down three or four feet and get on the one girder that was left, walk six or eight feet along it and crawl up the other side. It was dark and we couldn't see much, but it looked like an awfully long drop to me. Luckily Only 2 Shells Hit. The Germans threw shells at the bridge all, the time this patrol was on it but only two hit the structure, according to Corp. Powell of National City, Calif. The bridge was swaying and. Didn't feel too solid to me, he added.

I guess we were all glad to get off after our mission was accomplished. Three German self - propelled guns battled our tanks in Uerdin-gen this morning. One was knocked out- and another was abandoned but the third was still roaming-around the city and we were warned to proceed carefully. We were also warned not to go beyond the bridge approach be-cause a group of German paratroopers had made a strongpoint of a factory just to the north and, although surrounded.

Preparations were be-ing made to storm the building with tanks and flamethrowers when we entered the city. The enemy was shelling Uerdingen from across the river and what few refugees were on the streets were almost running.

On the sidewalk near a street crossing lay the bodies of two women, with belongings from bursted bundles strew n around them. A shell crater a few feet away explained the tragic scene. Four other women carrying bun-dles came hurrying past. They made a wide detour of the bodies, kept their faces carefully averted, and quickened their pace almost to a run. This item is in the category "Collectibles\Militaria\WW II (1939-45)\Original Period Items\United States\Field Gear, Equipment".