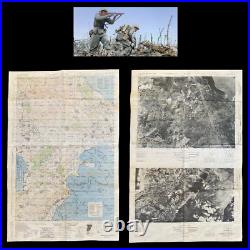 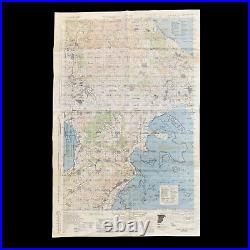 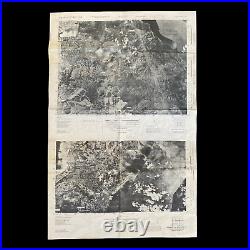 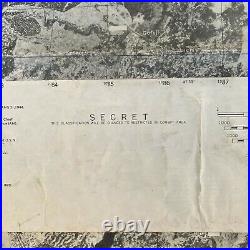 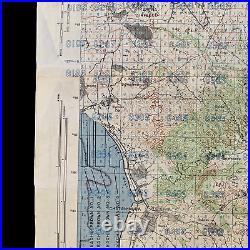 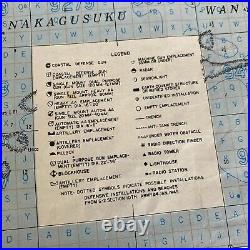 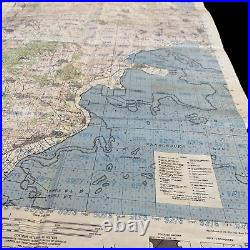 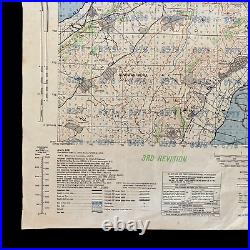 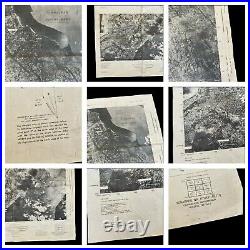 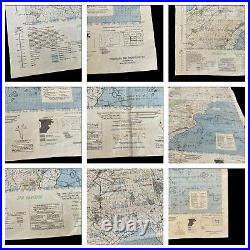 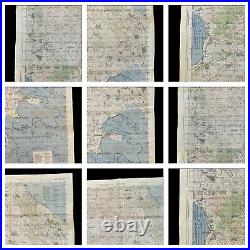 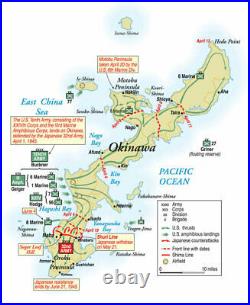 This large SECRET target map features notable areas such as ALL of the BROWN BEACH landing locations, Yontan Airfield, Kadena Airfield. This WWII original and extremely rare double-sided aerial photograph/gunnery target map is an updated'3RD REVISION' map used during the Battle of Okinawa. This "SECRET" marked map was not only used for the strategical planning and assault of the island but was printed two months (Feburary 1945) before the initial assault in April. The initial invasion of Okinawa was the largest amphibious assault in the Pacific Theater of World War II. This target map was used during the initial D-Day amphibious assault landings and shows the designated "BEACH BROWN 1, BEACH BROWN 2, BEACH BROWN 3, and BEACH BROWN 4" landed on by the 96th Infantry Division near Kabena Airfield. The battlefield area in Japanese fortifications displayed on this map was where some of the deadliest fighting occurred on Okinawa. For the Japanese, Okinawa was crucial and every resource that could be brought to bear was dedicated to holding the island.

However, even the most die-hardened militarist knew that it was only a matter of time before the massive Allied forces arrayed against the Japanese on Okinawa would prevail. Their strategy was not to hold the island but to make the Americans pay so dearly for its capture that they would be discouraged from proceeding further toward Japan's home islands.

Facing the American invaders was Japan's 32nd Army under the command of Lieutenant General Mitsuru Ushijima. Ushijima followed the strategy already employed by Lieutenant General Tadamichi Kurabayashi at Iwo Jima. Rather than opposing the landing on the beaches and exposing his troops to the massive firepower of the invasion fleet, he withdrew his forces to the southern part of the island where numerous ridges and hills would make the Americans pay heavily for every foot of the island taken. What makes this Okinawa target map so rare is that it showcases in great detail Japanese beach defenses, artillery emplacements, pillboxes, radar locations as well as A. Each grid sector denotes a contour intervals for accurate aerial, naval, and artillery strike support.