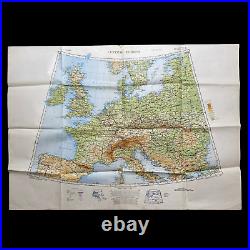 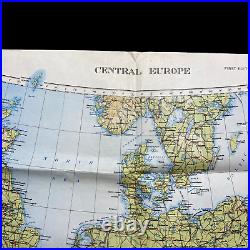 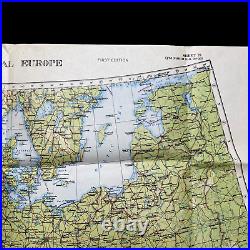 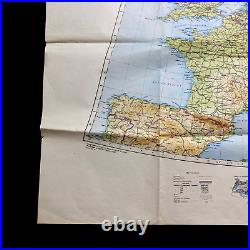 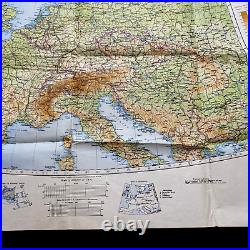 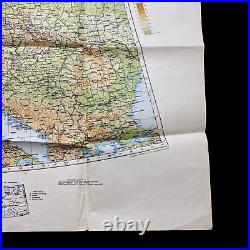 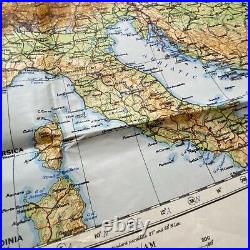 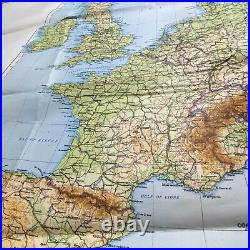 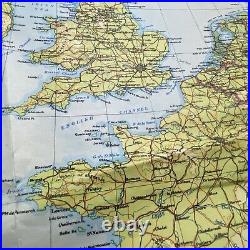 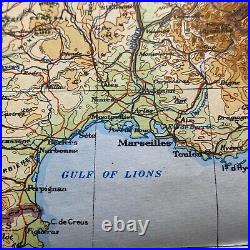 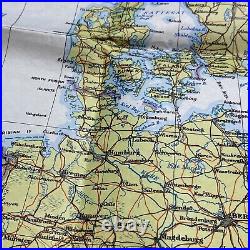 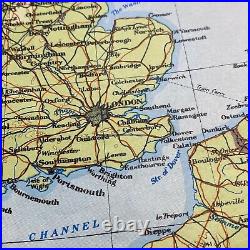 This incredibly rare "FIRST EDITION" WWII map titled "Central Europe" was a topographical military intelligence map of the Allied Forces Headquarters as used for operational planning in the European Theater. This early World War II theater planning map would have been used by high-ranking U. Army and HQ officers and officials in charge of operational planning and strategy in the European Theater of Normandy, Italy, Southern France, Belgium, Germany, etc. This map would have been very useful in Operation Overlord, Operation Dragoon, Allied invasion of Italy, Battle of the Bluge, Push to the Rhine, and many more. The map has a unique legend that marks "TOWNS OF IMPORTANCE", railways, roads, rivers and other land features.

This WWII European Theater map would make an amazing addition to any WWII collection. Codenamed Operation Overlord, the battle began on June 6, 1944, also known as D-Day, when some 156,000 American, British and Canadian forces landed on five beaches along a 50-mile stretch of the heavily fortified coast of France's Normandy region. The invasion was one of the largest amphibious military assaults in history and required extensive planning. Prior to D-Day, the Allies conducted a large-scale deception campaign designed to mislead the Germans about the intended invasion target. By late August 1944, all of northern France had been liberated, and by the following spring the Allies had defeated the Germans. The Normandy landings have been called the beginning of the end of war in Europe. Operation Dragoon (initially Operation Anvil) was the code name for the landing operation of the Allied invasion of Provence (Southern France) on 15 August 1944.

The operation was initially planned to be executed in conjunction with Operation Overlord, the Allied landing in Normandy, but the lack of available resources led to a cancellation of the second landing. By July 1944 the landing was reconsidered, as the clogged-up ports in Normandy did not have the capacity to adequately supply the Allied forces. Concurrently, the French High Command pushed for a revival of the operation that would include large numbers of French troops. As a result, the operation was finally approved in July to be executed in August. The Allied invasion of Italy was the Allied amphibious landing on mainland Italy that took place from 3 September 1943, during the Italian campaign of World War II.

The operation was undertaken by General Sir Harold Alexander's 15th Army Group comprising General Mark W. Clark's American Fifth Army and General Bernard Montgomery's British Eighth Army and followed the successful Allied Invasion of Sicily. The main invasion force landed around Salerno on 9 September on the western coast in Operation Avalanche, while two supporting operations took place in Calabria (Operation Baytown) and Taranto (Operation Slapstick). This item is in the category "Collectibles\Militaria\WW II (1939-45)\Original Period Items\United States\Field Gear, Equipment". The seller is "premierrelics" and is located in this country: US.