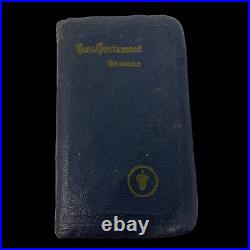 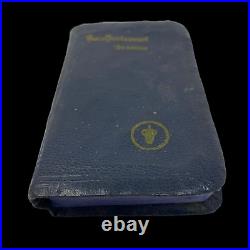 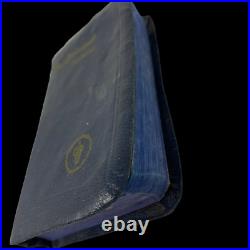 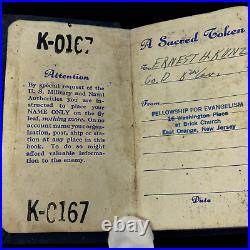 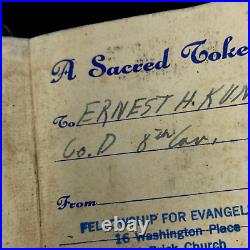 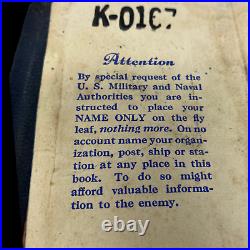 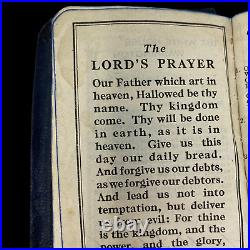 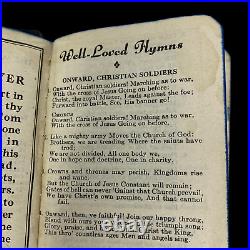 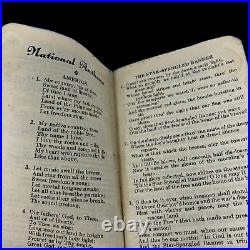 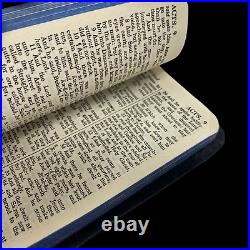 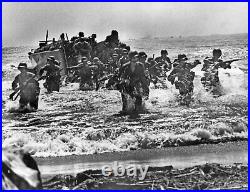 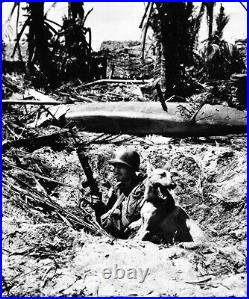 This World War II'National Edition' New Testament Bible is named to WWII hero Ernest H. Kunz (K-0167) who served valiantly in the Pacific Theater against the Japanese with 2nd Brigade 8th Calvary Co. Kunz carried this bible with him during his entire combat experience during WWII in the Pacific Theater where he is credited with combat participation in the Manus Island invasion and Leyte invasion (Operation King II) along with many other areas of operation with the 8th Calvary during WWII. This bible contains the hand written inscription of Ernest H. Kunz (K-0167) along with a message from Franklin D.

The bible also contains the Lord's Prayer, well loved hymns, the National Anthem, Star Spangled Banner, as well as the verses and story of the New Testament. This bible has been through "the thick of it" and as a result it is heavily worn.

The pages shows some stains and use, however, the binding of the book is fully detached from the outside leather (front and back). This is something very easily mended and fixed with the right glue and materials. We wanted to leave the artifact untouched and as is. 8th Calvary and the Pacific Theater. Entered World War II, the regiment arrived in Australia in 1943 and started an intense period of jungle warfare training to prepare it for combat. Following the invasion of Los Negros, the 8th Regiment departed from New Guinea as the part of the reinforcements for the Admiralty Campaign. On 9 March 1944, they landed at Salami Beach, Los Negros Island. The Manus Island invasion commenced at dawn 15 March, with heavy shelling, naval bombardment and air attacks. Soon afterward, the 2nd Brigade, under the command of Brigadier General Verne D.

Mudge, surprised the enemy by landing at two beaches near the Lugos Mission Plantation. By dusk the 1st Squadron of the 8th Cavalry regiment had advanced past snipers and scattered resistance and dug in on the western edge of Lorengau Airdrome, the last airfield controlled by the Japanese. 16 March saw very heavy fighting as troopers charged or crawled through heavy machine gun fire to wipe out the Japanese positions.

Lorengau Airdrome was captured the next day, after the 7th Cavalry moved up to relieve the weary 8th Cavalry fighters. On 18 March, the 2nd Brigade crossed the river in force and drove the enemy from Lorengau Village. The objectives were Rossum, a small village south of Lorengau and Salsia Plantation. By 21 March, the 8th Cavalry had won control of most of the plantation, but the battle for Rossum was slowed by heavy jungle which the Japanese used to their advantage. After 96 hours of bitter combat the 1st Squadron, 7th Cavalry was relieved by the 1st Squadron, 8th Cavalry.

The final push to Rossum was made behind heavy artillery fire and air bombardment. On 28 March, the battle for Los Negros and Manus was over, except for mopping up operations. The Admiralty Islands campaign officially ended on 18 May 1944.

Japanese casualties were 3,317 killed. On 20 October, the regiment participated in the Leyte invasion, Operation King II. Held in corps reserve, the 8th Cavalry Regiment moved into the fighting on 23 October. The 1st Squadron, 8th Cavalry drove up a highway leading northwest of Tacloban and the 2nd Squadron advanced along the southern shore of the Sab Jaunico Strait which sealed off the route and opened the way for the invasion of Samar on 24 October.

On Samar, on 5 December, the regiment was ordered to seize the town of Wright, and establish control over the southwestern portion of the island. Hinabangan fell on 7 December. The troopers fought their way into Wright on 13 December, and by 21 December, the towns of Catbalogan and Taft fell and the Campaign of Samar came to an end.

On 3 February 1945, elements of the 1st Cavalry Division pushed into the northern outskirts of Manila, with only the steep-sided Tuliahan River separating them from the city proper. A squadron of the 8th Cavalry reached the bridge just moments after Japanese soldiers had finished preparing it for demolition. As the two sides opened fire on one another, the Japanese lit the fuse leading to the carefully placed explosives. Sutton, a Navy demolitions expert attached to the division, dashed through the enemy fire and cut the burning fuse. At 18:35, the column crossed the city limits of Manila.

Troop "F" of the 8th Cavalry, under the command of Captain Emery M. Hickman, swept through the heavy Japanese sniper fire to the White House of the Philippines in time to take control of the Malacañan Palace and save it from the torches of the Japanese.

As the gates were opened, cheering Filipinos emerged and helped the cavalrymen set up a defense perimeter around the palace grounds. After the surrender of the Japanese, the 1st Division was given responsibility for occupying the entire city of Tokyo and the adjacent parts of Tokyo and Saitama Prefectures. The command posts of the 1st Brigade, 5th Cavalry and 12th Cavalry were situated at Camp McGill at Otawa, approximately 20 miles (32 km) south of Yokohama.

The 2nd Brigade maintained its command post at the Imperial Guard Headquarters Buildings in Tokyo, while the 7th Cavalry was situated at the Merchant Marine School. The 8th Cavalry occupied the 3rd Imperial Guard Regiment Barracks in Tokyo, which provided greater proximity to security missions at the American and Russian Embassies and the Imperial Palace grounds. Division Headquarters and other units were stationed at Camp Drake near Tokyo. This item is in the category "Collectibles\Militaria\WW II (1939-45)\Original Period Items\United States\Field Gear, Equipment". The seller is "premierrelics" and is located in this country: US. This item can be shipped to United States.