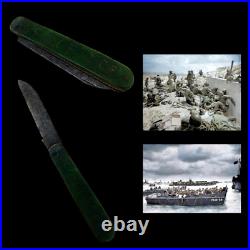 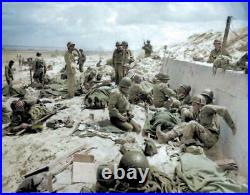 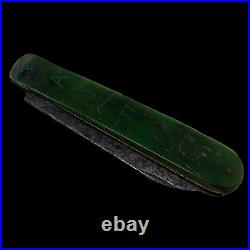 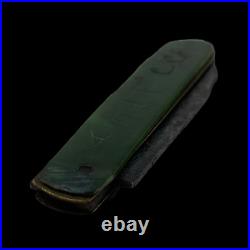 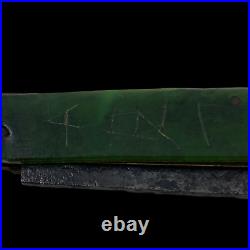 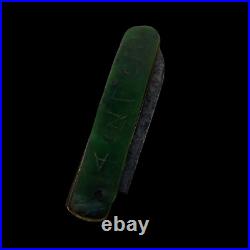 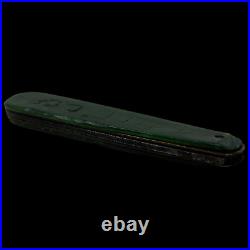 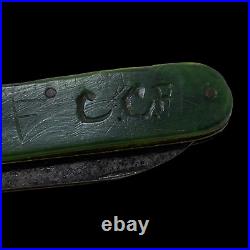 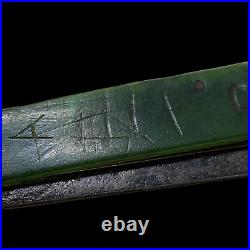 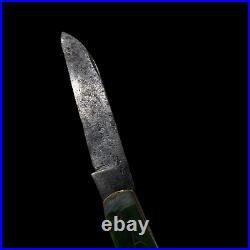 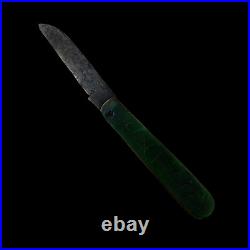 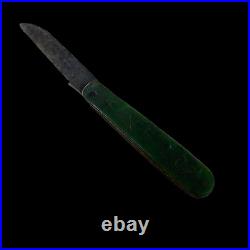 To hit the beaches at Normandy on D-Day, 6 June 1944. Relieving the isolated 82nd Airborne Division. The 4th cleared the Cotentin peninsula.

And took part in the capture of Cherbourg. After taking part in the fighting near Periers, 6-12 July, the division broke through the left flank of the German 7th Army. Helping to stem the German drive toward Avranches.

This incredible WWII 4th infantry soldiers pocket knife bears the colors of the fourth infantry division combat service identification badge (GREEN and GOLD). The 4th Infantry Division's official nickname, "Ivy", is a play on words of the Roman numeral. Ivy leaves symbolize tenacity and fidelity which is the basis of the division's motto: "Steadfast and Loyal". The second nickname, "Iron Horse", has been adopted to underscore the speed and power of the division and its soldiers. While we do not know the name of the 4th Infanry Division soldier that once carried this knife it still is full operational and still clearly shows the personal soldier engraved 4th INF with the soldier's initials C.

It is incredible to think of the rich history of the 4th and the events this personal pocket knife witnessed in the pocket of an American hero in the ETO. By the end of August the division had moved to Paris, and gave French forces. The first place in the liberation of their capital. During the liberation of Paris.

Took on a self-appointed role as a civilian scout in the city of Paris for his friends in the 4 ID. He was with the 22nd Infantry Regiment. When it advanced from Paris, northeast through Belgium, and into Germany. Who met Hemingway during the liberation of Paris, was with the 12th Infantry Regiment. The 4th then moved into Belgium through Houffalize. To attack the Siegfried Line. On 14 September, and made several penetrations. Slow progress into Germany continued in October, and by 6 November the division entered the Battle of Hurtgen Forest. Where it was engaged in heavy fighting until early December.

It then shifted to Luxembourg. Only to meet the German Army.

S winter Ardennes Offensive head-on in the Battle of the Bulge. Starting on 16 December 1944. Although its lines were dented, it managed to hold the Germans at Dickweiler. In January across the Sauer.

Overran German positions in Fouhren. Halted at the Prüm River. In February by heavy enemy resistance, the division finally crossed on 28 February near Olzheim. And raced on across the Kyll. After a short rest, the 4th moved across the Rhine. On 29 March at Worms. And by 3 April had established a bridgehead. Across the Main at Ochsenfurt. The division had reached Miesbach.

On 2 May 1945, when it was relieved and placed on occupation duty. This item is in the category "Collectibles\Militaria\WW II (1939-45)\Original Period Items\United States\Field Gear, Equipment".