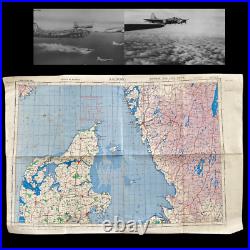 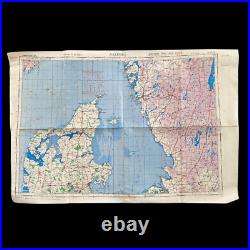 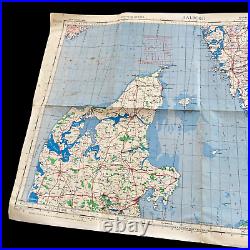 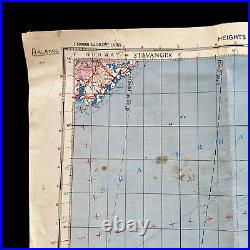 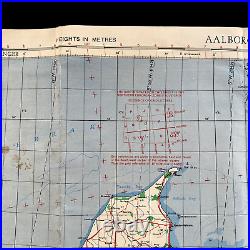 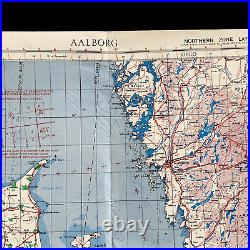 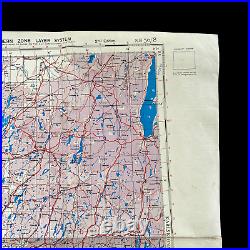 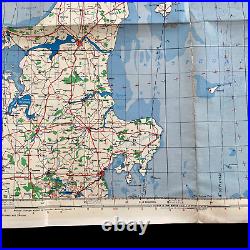 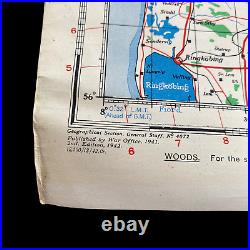 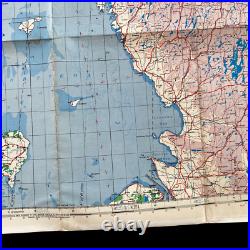 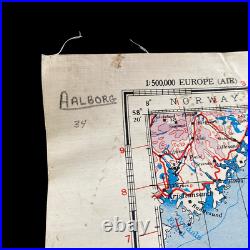 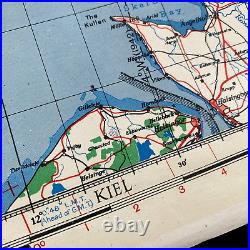 RARE MUSEUM-GRADE BOMBING RAID MISSION MAP FROM "BLOODY HUNDREDTH" 8TH AIR FORCE WWII NAVIGATOR VETERAN. This map of the "AALBORG" region in Germany is located just north of KIEL, which means this map would have also been used with the corresponding Kiel map for the bombing raids just north of the Kiel region which features one of the largest and most famous German "SUB YARD" U-Boat facilities of Kiel, Germany. Kiel was a major town and port for the Kriegsmarine and the many activities at the port drew considerable attention from Allied bombers. To protect the shipyard workers, sailors, and of course the civilian inhabitants, many bunkers were built throughout the area. Over the course of WWII, the 100th Bomb Group (The Bloody Hundredth) participated in 6 bombing missions targeting KIEL aimed to target the city itself as well as KIEL'S sub yards, bunkers, and harbors.

This incredible original WWII Europe Air mission map was by both navigators and pilots on the bombing raids and missions of the 100th Bomb Group (8th Air Force) while serving in the European Theater. This mission map was a bring back of a WWII navigator veteran who served extensively with the 100th Bomb Group (8th Air Force) during WWII. This 8th Air Force veteran brought back ALL of his bombing raid mission maps during his time serving from 1942 till VE-Day in 1945. This veterans collection has been requested to be pieced out to spread the legacy of the airmen of the 8th Air Force that sacrificed their lives for our freedom. A portion of this sale is also being donated to the non-profit Honor Flight Network. The mission of Honor Flight is to transport America's veterans to Washington, D. To visit the memorials dedicated to honoring those who have served and sacrificed for our country. The 100th Bomb Group was constituted as a heavy bomber group inside the Eighth Air Force, which, at peak strength on D-Day, June 6, 1944, fielded 40 groups of Boeing B-17s and Consolidated B-24s. The 351st Bomb Group flew strategic bombing missions from their base at Polebrook, Northamptonshire from April 1943 to June 1945. The 100th Bomb Group also known as the "The Bloody Hundredth", because of its reputation for losing a high number of aircraft and crews. Over the course of 22 months of aerial combat, the aircrews of the 100th had served a deadly apprenticeship as they honed their skills and tactics. In an unemotional analysis of the raw numbers, the Bloody 100th's wartime losses were not the worst suffered by the Eighth Air Force, though they were in the top three of losses by heavy bomber groups. The official history from the 100th Bomb Group Foundation cites 184 missing aircrew reports on 306 missions. An Eighth Air Force Combat Diary. 100th copilot John Clark pointed out that 50% of the Group's losses occurred in only 3% of its missions.

Like a gambler whose luck has gone cold, when the crews of the 100th had a bad day, they had a very bad day. More than 26,000 Eighth Air Force personnel sacrificed their lives in service to the war effort. The total number killed or missing in action was slightly more than that suffered by the U.

Marine Corps, and a little less than half the losses sustained by the entire U. Comparisons such as these do nothing to diminish the contributions of other mili­tary branches, but rather point out the gargantuan scale of the Eighth Air Force's effort. The 100th Bomb Group's portion of those losses was 785 men killed outright or missing in action and 229 aircraft destroyed or rendered unsuitable for flight.

Moved to England, May-Jun 1943, and was assigned to Eighth AF. Operated chiefly as a strategic bombardment organization until the war ended. From Jun 1943 to Jan 1944, concentrated its efforts against airfields in France and naval facilities and industries in France and Germany.

Received a DUC for seriously disrupting German fighter plane production with an attack on an aircraft factory at Regensburg on 17 Aug 1943. Bombed airfields, industries, marshaling yards, and missile sites in Western Europe, Jan-May 1944. Operations in this period included participation in the Allied campaign against enemy aircraft factories during Big Week, 20-25 Feb 1944. Completed a series of attacks against Berlin in Mar 1944 and received a DUC for the missions. Beginning in the summer of 1944, oil installations became major targets. In addition to strategic operations, the group engaged in support and interdictory missions, hitting bridges and gun positions in support of the Normandy invasion in Jun 1944; bombing enemy positions at St Lo in Jul and at Brest in Aug and Sep; striking transportation and ground defenses in the drive against the Siegfried Line, Oct-Dec 1944; attacking marshaling yards, defended villages, and communications in the Ardennes sector during the Battle of the Bulge, Dec 1944- Jan 1945; and covering the airborne assault across the Rhine in Mar 1945. Received the French Croix de Guerre with Palm for attacking heavily defended installations in Germany and for dropping supplies to French Forces of the Interior, Jun-Dec 1944.

Inactivated on 21 Dec 1945. This item is in the category "Collectibles\Militaria\WW II (1939-45)\Original Period Items\United States\Field Gear, Equipment". The seller is "premierrelics" and is located in this country: US. This item can be shipped worldwide.