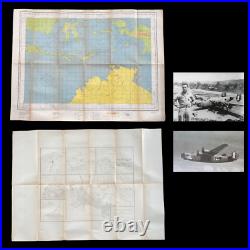 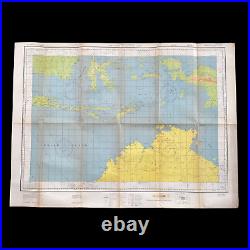 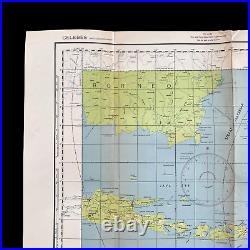 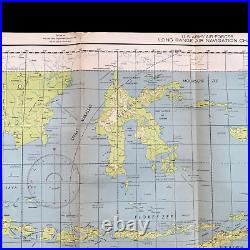 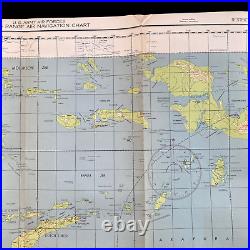 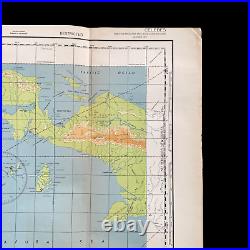 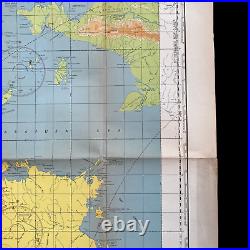 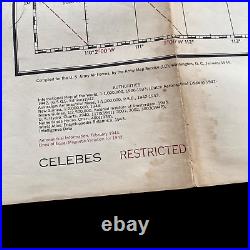 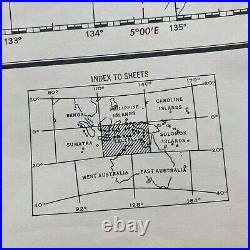 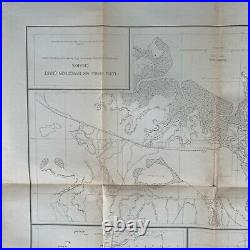 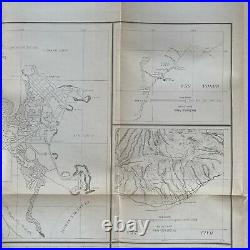 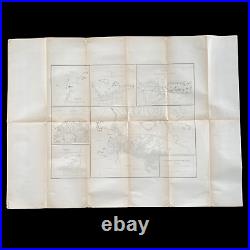 Army Air Forces Long Range Air Navigation Chart is a "RESTRICTED" special double-sided print used for air raid bombing missions in the Pacific Theater. This map titled "Celebes" was a bring back from the combat missions of a 90th Bombardment Group B-24 navigator of the infamous Jolly Rodgers. This map was used by the Jolly Rodgers during 1944 as the 90th supported the New Guinea Campaign through the end of June, then made long-range raids on oil refineries at Balikpapan, Borneo, in September and October. What makes this Jolly Rodger mission air map so rare is that it shows some of the most famous islands of the Pacific Theater and historically recorded missions of the Jolly Rodger against Japanese forces.

The map shows Australia (base of Jolly Rodgers), New Guinea, Ceram, Celebes, Borneo, and Java. The 90th Heavy Bombardment Group, known as the Jolly Rogers, was an element of the Fifth Air Force headquartered in Brisbane, Australia. During World War II it played a crucial role from the Battle of the Bismarck Sea to Leyte Gulf. The Jolly Rogers crippled enemy airpower on the ground and in the air.

A sign hanging beneath the squadron's name proclaimed it to be The best damn heavy bomb group in the world. The group was awarded a Distinguished Unit Citation for operations in Papua through January 1943, The unit participated in the Battle of Bismarck Sea in March 1943, and earned another citation for strikes on enemy airfields at Wewak, New Guinea in September 1943 despite heavy flak and fighter opposition. During 1944, the 90th supported the New Guinea Campaign through the end of June, then made long-range raids on oil refineries at Balikpapan, Borneo, in September and October.

In January 1945, the group moved to the Philippines and supported ground forces on Luzon, attacked industrial targets on Formosa, and bombed railways, airfields, and harbor facilities on the Asiatic mainland. Shortly before the end of the war in the Pacific, the 90th moved to Okinawa, from which it would be able to strike the Japanese home islands. This item is in the category "Collectibles\Militaria\WW II (1939-45)\Original Period Items\United States\Field Gear, Equipment". The seller is "premierrelics" and is located in this country: US.