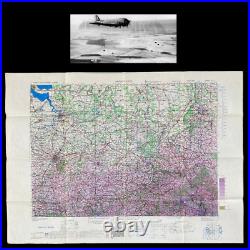 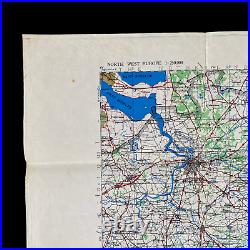 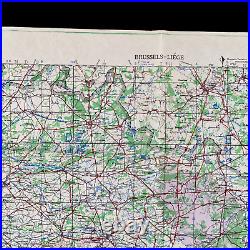 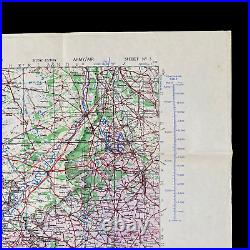 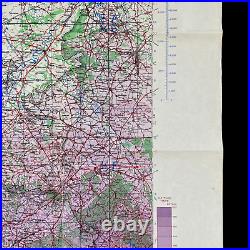 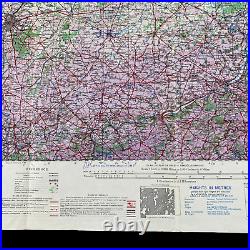 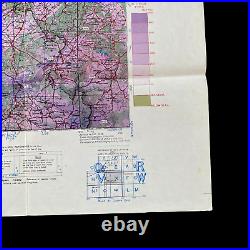 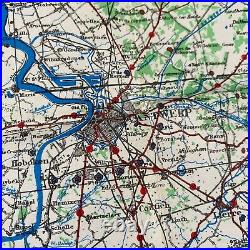 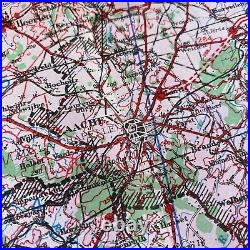 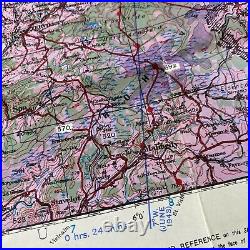 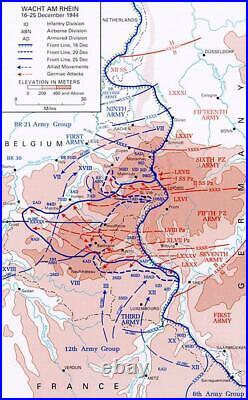 Comes with Comes with a hand-signed C. This rare and museum-grade 1943 Army Air Corps WWII combat operations map was used by aircraft such as the infamous B-17, B-24, and C-47 during the Battle of the Bulge. Despite the treacherous weather conditions of low cloud, fog, snow, and rain, airmen of the Army Air Corps rose gallantly to the challenge. This map shows towns and regions very prominent during the Battle of the Bulge such as MALMEDY, AACHEN, and EUPEN, and the German main objective of ANTWERP. The altitude tints, conversion table and navigational flight lines updated as of 1943 provided vital navigation information for both pilots and navigators.

This map also marked as being revised using the most updated aerial reconnaissance photos of the area. Called "the greatest American battle of the war" by Winston Churchill, the Battle of the Bulge in the Ardennes region of Belgium was Adolf Hitler's last major offensive in World War II against the Western Front. Hitler's aim was to split the Allies in their drive toward Germany. The German troops' failure to divide Britain, France and America with the Ardennes offensive paved the way to victory for the allies. Lasting six brutal weeks, from December 16, 1944, to January 25, 1945, the assault, also called the Battle of the Ardennes, took place during frigid weather conditions, with some 30 German divisions attacking battle-fatigued American troops across 85 miles of the densely wooded Ardennes Forest.

16, 1944, German artillery erupted and tanks (panzers) suddenly appeared out of the mist in a quiet sector held by American troops. The Battle of the Bulge raged until Jan. 13, 1945 in the Ardennes, a forested area near the conjunction of Belgium, Luxembourg and Germany.

The German goal was to break through U. First Army defenses and capture the port of Antwerp (200 miles away), while splitting British and American forces. Ground force resistance was tougher than the attackers expected.

All that Hitler got for his irreplaceable losses of troops and tanks was a brief 80-mile bulge in the battle line. Many stories have been written about the bravery of U. Soldiers who prevented a German breakthrough in spite of harsh winter weather, as well as about the logistical problems and occasional brutality that were part of the German advance. All of those are worthy subjects in discussing the largest single battle the U. Ground forces fought in during World War II (more than 1,000,000 men in about 29 German, 28 American and four British divisions), but one aspect of the battle is relatively overlooked: air power.

As soon as it became obvious that the Germans (who had been retreating for six months since D-Day) were actually launching a major offensive, American air units were marshaled to counter the threat. Bad weather, including persistent fog and record cold, prevented tactical air support during most of the first several days. That helped the German panzers, which were vulnerable to Allied air superiority, but did not protect German supply lines and logistics centers behind the lines. The 100th Bomb Group and its fellow B-17 (and B-24) units soon focused their bombing missions against roads, bridges, railway junctions and airfields within a 100-mile radius of the Ardennes. Among the targets were Frankfurt, Kaiserslautern and Koblenz.

German vehicles and supplies were forced to travel at night by smaller and less direct roads, making it very difficult to maintain the momentum and replace the losses of the Wehrmacht and SS units pushing to the west. 22, the important road junction of Bastogne had been surrounded by three German divisions. The defenders, members of the 101st Airborne Division and parts of the 9th and 10th Armored Divisions, needed supplies of ammunition, food, medical supplies. There were also hundreds of Belgian civilians trapped in the city. Only precise airdrops in the face of enemy fire and winter weather could save the city and its brave defenders.

At that point, the theoretical 352nd Air Commando Group would have sent its C-47s and expert crews to save the city. Fortunately, the weather cleared enough on Dec. 23 to make airdrops possible. During the next few days, 961 C-47s and 61 gliders dropped 850 tons of supplies and ammunition to Bastogne. The stubborn resistance of the city's defenders helped to slow down the Germans, who failed to reach any of their major objectives before beginning their retreat Dec. Also on that day, the first tanks from Lt. George Patton's Third Army broke through German lines to end the siege of Bastogne. In just six more months, Allied forces would end the Third Reich.

There are many reasons to remember the Battle of the Bulge. This item is in the category "Collectibles\Militaria\WW II (1939-45)\Original Period Items\United States\Field Gear, Equipment".