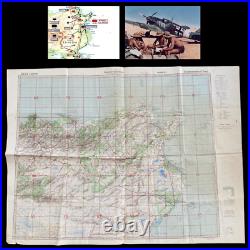 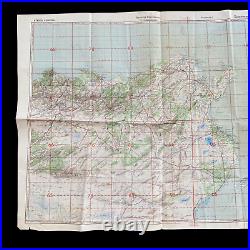 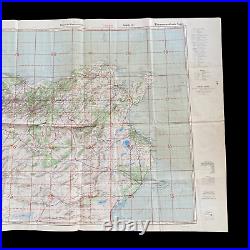 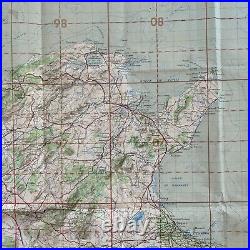 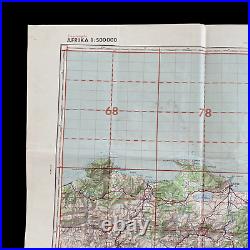 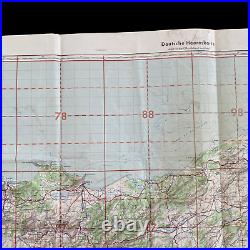 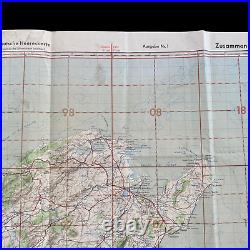 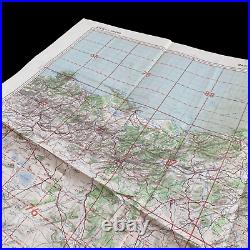 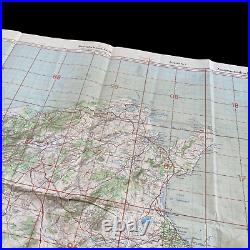 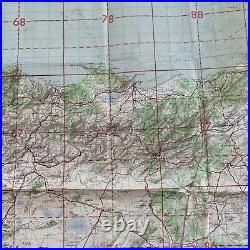 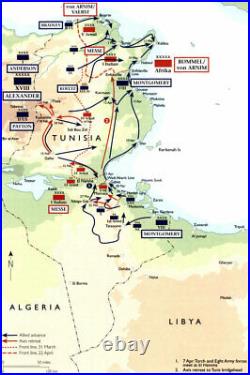 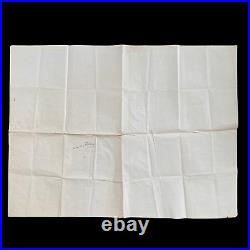 EXTREMELY RARE AND LARGE SIZE LUFTWAFFE MAP. Captured Erwin Rommel German Afrika Korps special edition map during the Tunisia Campaign of Northern Africa. This map was captured by Corp. This map would have provided vital information for Allied forces during the campaign. This special overprint Luftwaffe map is the rarest of the maps captured by Corp. Very limited amounts of these Luftwaffe combat strike maps of the North Africa Campaign have survived making this one very rare.

Patton and Marshal Bernard Law Montgomery, one of the most prominent and successful British commanders of the Second World War who most notably commanded the Allies against General Erwin Rommel in North Africa, and in the invasions of Italy and Normandy. Germany was forced to engage more and more aerial units on what was initially considered a peripheral arena of the war for the German High Command. Losses in bombers and fighters were high on both sides and when, at the end of 1942, the Allies landed in Morocco and Algeria on the back of the Afrika Korps, the Wehrmacht's fate was sealed. The depleted Luftwaffe did its best but could not change the course of the battle. The last German units capitulated in Tunisia in May 1943.

This German map has a very interesting history as it was captured during Operation Torch and the Tunisian campaign by a Corp. The Tunisian campaign (also known as the Battle of Tunisia) was a series of battles that took place in Tunisia during the North African campaign of the Second World War, between Axis and Allied forces from 17 November 1942 to 13 May 1943. The Allies consisted of British Imperial Forces, including a Greek contingent, with American and French corps. The battle opened with initial success by the German and Italian forces but the massive supply interdiction efforts led to the decisive defeat of the Axis. Over 250,000 German and Italian troops were taken as prisoners of war, including most of the Afrika Korps.

After the German and Italian occupation of Vichy France and their failed attempt to capture the French fleet at Toulon (Operation Lila), the French. Sided with the Allies, providing a third corps (XIX Corps) for Anderson. Elsewhere, French warships, such as the battleship. On 9 November, Axis forces started to build up in French Tunisia, unopposed by the local French forces under General Barré. Wracked with indecision, Barré moved his troops into the hills and formed a defensive line from Teboursouk through Medjez el Bab and ordered that anyone trying to pass through the line would be shot.

On 19 November, the German commander, Walter Nehring, demanded passage for his troops across the bridge at Medjez and was refused. The Germans attacked the poorly-equipped French units twice and were driven back.

The French had suffered many casualties and lacking artillery and armour, Barré was forced to withdraw. After consolidating in Algeria, the Allies began the Tunisia Campaign. Elements of the First Army (Lieutenant-General Kenneth Anderson), came to within 40 mi (64 km) of Tunis before a counterattack at Djedeida thrust them back. In January 1943, German and Italian troops under. Erwin Rommel, retreating westward from Libya, reached Tunisia. The Eighth Army (Lieutenant-General Bernard Montgomery) advancing from the east, stopped around Tripoli while the port was repaired to disembark reinforcements and build up the Allied advantage. In the west, the forces of the First Army came under attack at the end of January, were forced back from the Faïd Pass and suffered a reversal at the Battle of Sidi Bou Zid on 14-15 February. Axis forces pushed on to Sbeitla and then fought the Battle of Kasserine Pass on 19 February, where the US II Corps retreated in disarray until Allied reinforcements halted the Axis advance on 22 February. Fredendall was sacked and replaced by George Patton. General Sir Harold Alexander arrived in Tunisia in late February to take charge of the new 18th Army Group headquarters, which had been created to command the Eighth Army and the Allied forces already fighting in Tunisia. The Axis forces attacked eastward at the Battle of Medenine on 6 March but were easily repulsed by the Eighth Army. Rommel advised Hitler to allow a full retreat to a defensible line but was denied and on 9 March, Rommel left Tunisia to be replaced by Jürgen von Arnim, who had to spread his forces over 100 mi (160 km) of northern Tunisia.

The setbacks at Kasserine forced the Allies to consolidate their forces, develop their lines of communication and administration before another offensive. The First and Eighth Armies attacked again in April. Hard fighting followed but the Allies cut off the Germans and Italians from support by naval and air forces between Tunisia and Sicily. On 6 May, as the culmination of Operation Vulcan, the British took Tunis and American forces reached Bizerte.

By 13 May, the Axis forces in Tunisia had surrendered, opening the way for the Allied invasion of Sicily in July. This item is in the category "Collectibles\Militaria\WW II (1939-45)\Original Period Items\Germany\Personal, Field Gear". The seller is "premierrelics" and is located in this country: US. This item can be shipped worldwide.