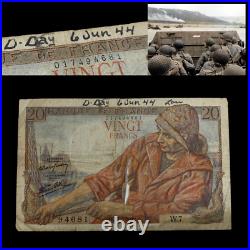 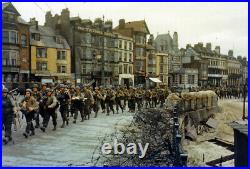 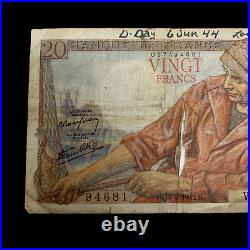 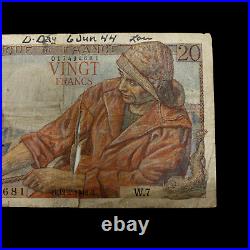 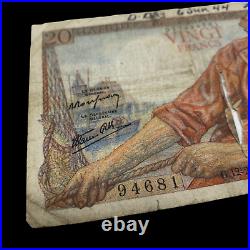 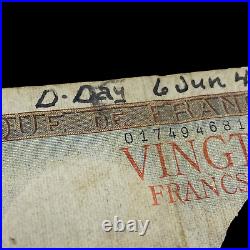 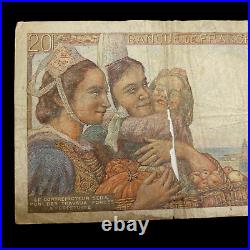 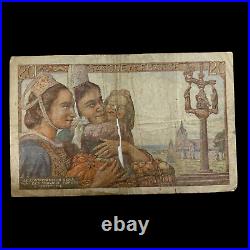 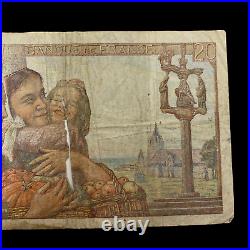 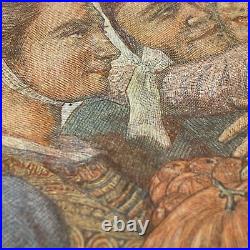 This WWII'20 Francs' bill was picked up by a WWII D-Day veteran who participated in the largest seaborne invasion in history. This bill was'captured' or'obtained' by the unknown soldier by the name of "Lou" who inscribed "D-Day 6 Jun 44" on the top of the bill.

While it is unknown what division Lou was a part of and what heroic role he played on Utah or Omaha Beach, this banknote is an amazing piece of history of that historic day. The note itself shows a salty and worn appearance with wear in the middle of the bill. It is believed that Lou kept this bill folded in his uniform pocket that severed as a memento and souvenir of that day. The bill shows many fold lines in the middle and may have been taken out and shown multiple times during his time in combat. Codenamed Operation Overlord, the battle began on June 6, 1944, also known as D-Day, when some 156,000 American, British and Canadian forces landed on five beaches along a 50-mile stretch of the heavily fortified coast of France's Normandy region.

The invasion was one of the largest amphibious military assaults in history and required extensive planning. Prior to D-Day, the Allies conducted a large-scale deception campaign designed to mislead the Germans about the intended invasion target. By late August 1944, all of northern France had been liberated, and by the following spring, the Allies had defeated the Germans.

The Normandy landings have been called the beginning of the end of the war in Europe. By dawn on June 6, thousands of paratroopers and glider troops were already on the ground behind enemy lines, securing bridges and exit roads. The amphibious invasions began at 6:30 a. The British and Canadians overcame light opposition to capture beaches codenamed Gold, Juno and Sword, as did the Americans at Utah Beach. Forces faced heavy resistance at Omaha Beach, where there were over 2,000 American casualties. However, by day's end, approximately 156,000 Allied troops had successfully stormed Normandy's beaches. According to some estimates, more than 4,000 Allied troops lost their lives in the D-Day invasion, with thousands more wounded or missing. Less than a week later, on June 11, the beaches were fully secured and over 326,000 troops, more than 50,000 vehicles, and some 100,000 tons of equipment had landed at Normandy. This item is in the category "Collectibles\Militaria\WW II (1939-45)\Original Period Items\United States\Field Gear, Equipment". The seller is "premierrelics" and is located in this country: US. This item can be shipped worldwide.