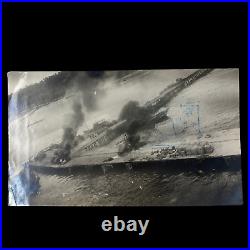 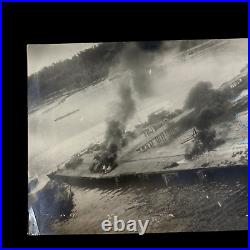 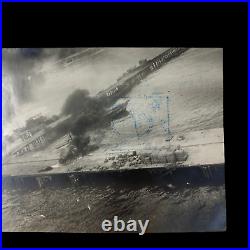 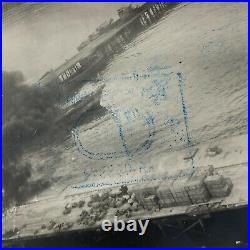 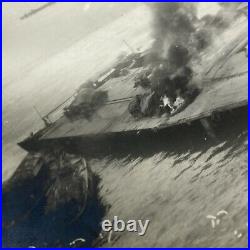 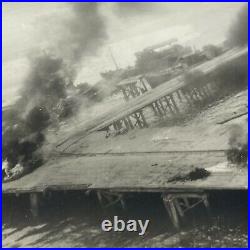 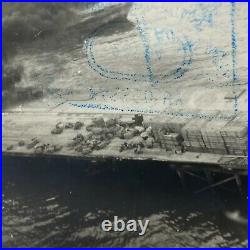 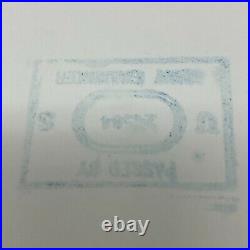 This incredible and original WWII mission photograph was taken during an aerial bombardment raid in the South Pacific by a group of Consolidated B-24 Liberators. These low altitude mission raid photographs were extremely dangerous to take and were shot for intelligence purposes as well as post mission damage briefings.

These black and white photographs were developed and printed at the Air Force base in the Pacific Theater immediately following the squadrons mission. Depending on the sensitivity and secrecy of these missions or areas they would often be marked RESTRICTED, CONFIDENTIAL, SECRET, or TOP SECRET.

The specific group and squadron of that participated in this area raid photographed is unknown, however, has been narrowed down to the GROUPS and SQUADRONS bellow based on their unit and combat histories in that area. This would make a great research artifact for any WWII or aviation collection. Fifth Air Force, Australia and South West Pacific. A total of four Bombardment Groups operated the B-24 Liberator with the Fifth Air Force during its campaign in the south west Pacific. The 90th Bombardment Group was the first Fifth Air Force unit to gain the B-24, operating it from bases in Australia from November 1942-February 1943, from New Guinea from February 1943 to August 1944 and then from Biak until January 1945.

During this period the unit supported the campaigns on New Guinea, as well as attacking targets on Palau and in the southern Philippines. In January 1945 the group moved to Mindoro, from where it attacked targets on the Asian mainland, before finally moving to Ie Shima in August 1945 in preparation for the attack on Japan. The 43rd Bombardment Group gained its B-24s between May and September 1943, while it was based on New Guinea. From there it moved to Owi, in the Schouten Islands (July 1944), then to the Philippines (November 1944) and finally to Ie Shima in July 1945. It attacked targets on New Guinea and the southern Philippines while based on New Guinea.

Finally from July 1945 it attacked targets in Japan, the Inland Sea and the Sea of Japan. The 22nd Bombardment Group gained its B-24s in February 1944. From then until September it was used to attack targets on Borneo, before helping to support the invasion of the Philippines. The group moved to Leyte in November 1944, from where it supported the campaign on Luzon, as well as attacking targets on Borneo and in China. At the very end of the war the group had moved to Okinawa, in preparation for the invasion of Japan.

The 380th Bombardment Group was assigned to the Fifth Air Force from the spring of 1943, but was attached to the Royal Australian Air Force from then until January 1945. During that period it trained Australian crews to fly the B-24, and carried out attacks on Japanese targets in the Dutch East Indies, the Bismarck Archipelago, on Borneo and on New Guinea.

In February 1945 the group rejoined the Fifth Air Force on Mindoro, from where it took part in the campaign on Luzon, as well as attacking targets on Formosa, Borneo and in French Indochina. Finally in August 1945 the group moved to Okinawa, from where it flew missions over Japan. A total of five B-24 groups served with the Seventh Air Force during the Second World War.

At the end of the war the B-24s of the Seventh Air Force were amongst the aircraft used to fly mercy missions to the Allied prisoners of war being held in Japan. Two groups operated the B-24 with the Thirteenth Air Force as it fought its way from the Solomons back to the Philippines - the 307th Bombardment Group and the 5th Bombardment Group. First to arrive was the 307th, in February 1943. The 5th BG arrived in August 1943, and at first operated from Guadalcanal, before moving on to Munda (1943), New Georgia, Momote, Los Negros, Noemfoor, Morotai (1944) and finally Samar in the Philippines (1945). The 307th followed a very similar path, although it didn't reach the Philippines until September 1945, after spending nearly a year based at Morotai.

The Thirteenth Air Force was also the home of the 868th Bombardment Squadron (the Snoopers). Formed in August 1943 and not part of any Bombardment Group (although it was initially designated the 394th BS, 5th BG) this unit specialised on long range low-level radar aided attacked, and operated over vast distances across the south-west Pacific. This item is in the category "Collectibles\Militaria\WW II (1939-45)\Original Period Items\United States\Field Gear, Equipment". The seller is "premierrelics" and is located in this country: US.