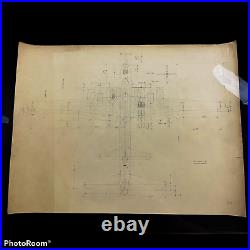 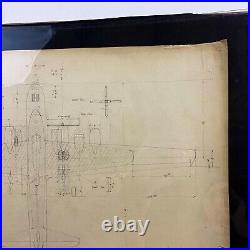 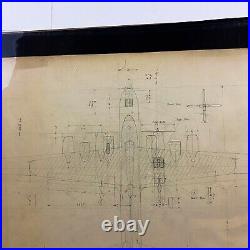 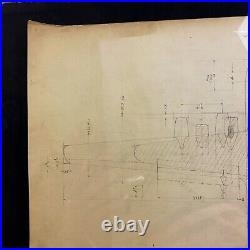 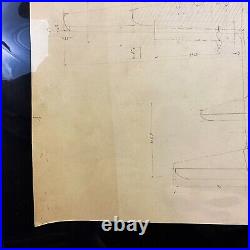 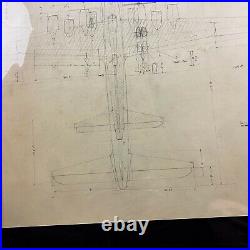 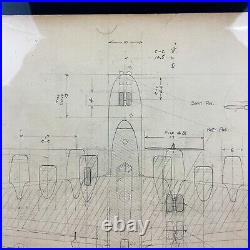 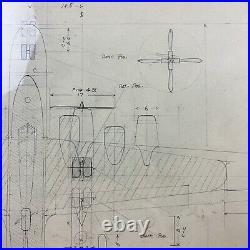 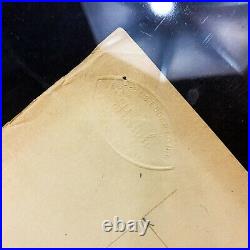 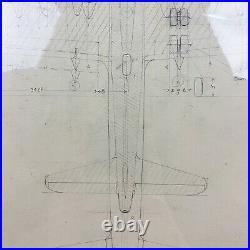 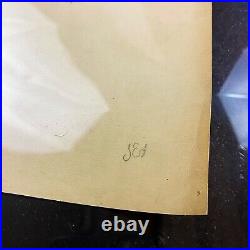 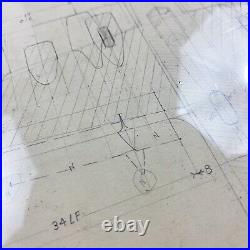 One of the rarest WWII artifacts you will ever see come to market! This extremely rare museum grade original WWII.

Boeing blueprint one of the most detailed hand drawn specs you will find on the Boeing B-29 Superfortress directly from the Boeing Company. This blueprint comes as Boeing submitted its Model 345 on 11 May 1940, in competition with designs from. This blueprint is done on the official heavy duty Keuffel & Esser blueprint paper used by the. Boeing company during this time. What makes this blueprint so incredibly rare is not only the early design features of the. But it also shows extremely detailed specs of the aircraft, and what appears to be a smaller fighter aircraft (possibly German) to show its size comparison. This blueprint comes directly from the. Boeing employee who played an instrumental role in the design of this historic aircraft. Famed for its World War II exploits, Boeing's Superfortress was conceived before the war. The B-29 was born near the war's midpoint, flying on September 21, 1942, built and employed in large numbers during the conflict. It successfully performed several roles during 15 months of combat, including bomber, minelayer, photoreconnaissance, search and rescue, and electronic warfare. B-29s fought in the Pacific theater, flying mostly from small islands with the worlds largest airbases, over vast stretches of ocean to enemy targets that could be more than 2,000 miles distant. Known as the only aircraft to drop atomic bombs in war, the B-29 contributed a major share to the Allied victory over Japan with its firebomb attacks and mine laying missions in the waters surrounding the home islands. United States Army Air Corps. Concluded that the Boeing B-17 Flying Fortress, which would be the Americans' primary strategic bomber during the war, would be inadequate for the. Which required a bomber that could carry a larger payload more than 3,000 miles. In response, Boeing began work on pressurized long-range bombers in 1938. Boeing's design study for the Model 334 was a pressurized derivative of the. To produce a new bomber in large numbers to counter the Germans' production. In December 1939, the Air Corps issued a formal specification for a so-called "superbomber" that could deliver 20,000 lb (9,100 kg) of bombs to a target 2,667 mi (4,292 km) away and at a speed of 400 mph (640 km/h). Boeing's previous private venture studies formed the starting point for its response to that specification.

Boeing submitted its Model 345 on 11 May 1940, n competition with designs from. The Model 33, later to become the. Douglas and Lockheed soon abandoned work on their projects, but Boeing received an order for two flying. Which were given the designation XB-29, and an airframe for static testing on 24 August 1940, with the order being revised to add a third flying aircraft on 14 December. Consolidated continued to work on its Model 33, as it was seen by the Air Corps as a backup in case there were problems with Boeing's design.

Boeing received an initial production order for 14 service test aircraft and 250 production bombers in May 1941, this being increased to 500 aircraft in January 1942. The B-29 featured a fuselage design with circular cross-section for strength. The need for pressurization in the cockpit area also led to the B-29 being one of very few American combat aircraft of World War II to have a.

Cockpit design, without a separate windscreen for the pilots. Manufacturing the B-29 was a complex task.

It involved four main-assembly factories: a pair of Boeing operated plants at. Were involved in the project. The first prototype made its maiden flight from. The combined effects of the aircraft's highly advanced design, challenging requirements, immense pressure for production, and hurried development caused setbacks. The second prototype, which, unlike the unarmed first, was fitted with a Sperry defensive armament system using remote-controlled gun turrets sighted by periscopes, first flew on 30 December 1942, this flight being terminated due to a serious engine fire.

On 18 February 1943, the second prototype, flying out of Boeing Field in Seattle, experienced an engine fire and crashed. The crash killed Boeing test pilot. And his 10-man crew, 20 workers at the Frye Meat Packing Plant and a Seattle firefighter. Changes to the production craft came so often and so fast that in early 1944, B-29s flew from the production lines directly to modification depots for extensive rebuilds to incorporate the latest changes. AAF-contracted modification centers and its own air depot system struggled to handle the scope of the requirements.

Some facilities lacked hangars capable of housing the giant B-29, requiring outdoor work in freezing cold weather, further delaying necessary modification. By the end of 1943, although almost 100 aircraft had been delivered, only 15 were airworthy. This prompted an intervention by General. To resolve the problem, with production personnel being sent from the factories to the modification centers to speed availability of sufficient aircraft to equip the first. In what became known as the. This resulted in 150 aircraft being modified in the five weeks between 10 March and 15 April 1944. The most common cause of maintenance headaches and catastrophic failures were the engines. Later became a trustworthy workhorse in large piston-engined aircraft, early models were beset with dangerous reliability problems. This problem was not fully cured until the aircraft was fitted with the more powerful. Pratt & Whitney R-4360 "Wasp Major". /B-50 program, which arrived too late for.

Interim measures included cuffs placed on propeller blades to divert a greater flow of cooling air into the intakes which had baffles installed to direct a stream of air onto the exhaust valves. Oil flow to the valves was also increased. Fittings to prevent oil loss, thorough. Made to detect unseated valves, and frequent replacement of the uppermost five cylinders (every 25 hours of engine time) and the entire engines (every 75 hours). Pilots, including the present day pilots of the.

One of the last two remaining flying B-29s, describe flight after takeoff as being an urgent struggle for airspeed (generally, flight after takeoff should consist of striving for altitude). Need airflow to keep them cool, and failure to get up to speed as soon as possible could result in an engine failure and risk of fire. One useful technique was to check the magnetos while already on takeoff roll rather than during a conventional static engine-runup before takeoff.

In wartime, the B-29 was capable of flight at altitudes up to 31,850 feet (9,710 m), at speeds of up to 350 mph (560 km/h). This was its best defense, because Japanese fighters could barely reach that altitude, and few could catch the B-29 even if they did attain that altitude. Could reach it, and since the. Hitting or damaging the aircraft from the ground in combat proved difficult.

The item "Rare WWII Early Design Boeing B-29 Superfortress Bomber Blueprint Named Relic" is in sale since Sunday, November 8, 2020. This item is in the category "Collectibles\Militaria\WW II (1939-45)\Original Period Items\United States\Field Gear, Equipment". The seller is "worldwarartifactsandrelics" and is located in Algonquin, Illinois.