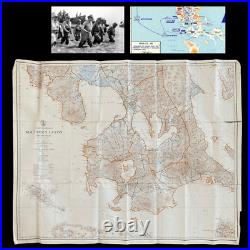 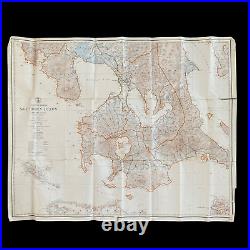 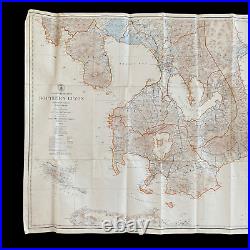 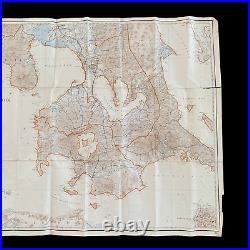 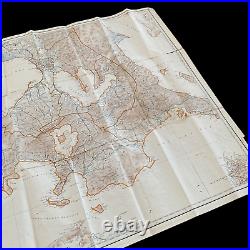 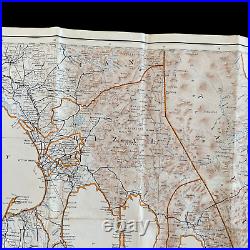 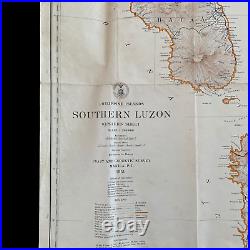 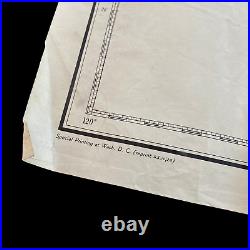 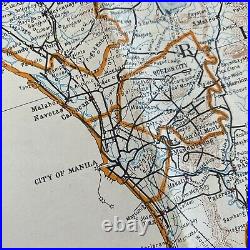 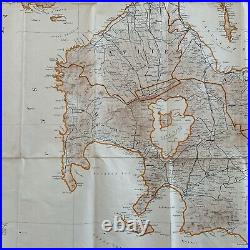 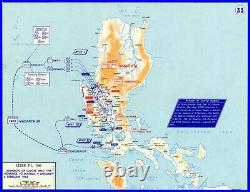 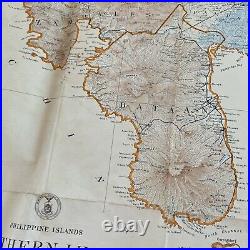 This very large and very rare Pacific Theater invasion map is a 1943 SPECIAL PRINTING AT WASH. And was used by the war planners and ground force commanders for the liberation of the Philippines.

MacArthur said when he took over as Allied commander in the Southwest Pacific. I came through and I shall return. As the Pacific campaign dragged on, MacArthur never strayed far from that goal, and every move he made was aimed ultimately at recapturing the lost archipelago.

Divisions and five independent regiments would see action on Luzon, making it the largest campaign of the Pacific war and involving more troops than the United States had used in North Africa, Italy, or southern France. Titled "Philippine islands - Southern Luzon - Western Sheet" this 1941 coast and geodetic survey map was also specially compiled using seven additional sources of information as noted near the map legend. This map showing the vital areas of Manila, Manila Bay, and Battan were crucial for war planners a MacArthur for determining a D-Day type amphibious landing point on Luzon that would provide the Americans with a strategic advantage with the ultimate goal of capturing the capital city of Manila. The S-Day amphibious landings occurred in January 1945, the Sixth U.

Walter Krueger waded ashore at Lingayen Gulf. This map shows the regions in which the war planners and MacArthur stagged the 2nd amphibious assault of the Luzon Invasion code-named MIKE VI and MIKE VII.

While advancing from the North, MacArthur added additional forces to the drive on the capital. On 15 January he launched Operation MIKE VI, a second amphibious assault some forty-five miles southwest of Manila. On 31 January, X-ray Day, two regiments of the 11th Airborne Division, under the command of Maj. The paratroopers seized a nearby bridge before the surprised Japanese defenders had a chance to demolish it, and then the paratroopers turned toward Manila. The division's third regiment, the 511th Parachute, dropped in by air to join the advance, which by the following day was speeding north along the paved highway toward the capital to the cheers of throngs of grateful Filipino civilians along the way.

More detailed combat history on the Battle of Manila. On 9 January 1945, the Sixth U. Walter Krueger waded ashore at Lingayen Gulf and began a rapid drive south in the Battle of Luzon. On January 12th, MacArthur ordered Krueger to advance rapidly to Manila.

The 37th Infantry Division, under the command of Major Gen. This movement and terrain map would have been absolutely vital in combat and operational success as U. Forces battled Japanese forces and pushed close to the city of Manila. This map not only labels strategically important towns but also notes the terrain for both foot soldiers, tracked vehicles, and amphibious craft.

This map would've been constructed through secret ground intelligence received as well as hundreds of aerial reconnaissance photographs prior to the D-Day invasion. After landing at San Fabian on 27 January, the 1st Cavalry Division, under the command of Major Gen.

Mudge, was ordered by MacArthur on 31 January, to Get to Manila! Free the internees at Santo Tomas.

Take Malacanang Palace and the Legislative Building. As the Americans converged on Manila from different directions, they found that most of the Imperial Japanese Army troops defending the city had been withdrawn to Baguio, on the orders of General Tomoyuki Yamashita, commander in chief of Japanese Army forces in the Philippines.

Yamashita planned to engage Filipino and U. He had three main groups under his command: 80,000 men of the Shimbu Group in the mountains east of Manila, 30,000 of the Kembu Group in the hills north of Manila, and 152,000 in the Shobu Group in northeastern Luzon. On 3 February, elements of the 1st Cavalry Division under Maj. Mudge pushed into the northern outskirts of Manila and seized a vital bridge across the Tullahan River, which separated them from the city proper, and quickly captured Malacanang Palace. Chase's 8th Cavalry, the first unit to arrive in the city, began a drive toward the sprawling campus of the University of Santo Tomas, which had been turned into the Santo Tomas Internment Camp for civilians and the US Army and Navy nurses sometimes known as the "Angels of Bataan". Since 4 January 1942, a total of thirty-seven months, the university's main building had been used to hold civilians.

Out of 4,255 prisoners, 466 died in captivity, three were killed while attempting to escape on 15 February 1942, and one made a successful breakout in early January 1945. Manuel Colayco, a USAFFE guerrilla officer, became an allied casualty of the city's liberation, after he and his companion, Lt. Diosdado Guytingco, guided the American First Cavalry to the front gate of Santo Tomas. Struck by Japanese bullets, Colayco died seven days later in Legarda Elementary School, which became a field hospital.

The Japanese, commanded by Lt. Toshio Hayashi, gathered the remaining internees together in the Education Building as hostages and exchanged pot shots with the Americans and Filipinos. The next day, 5 February, they negotiated with the Americans to allow them to rejoin Japanese troops to the south of the city, carrying only individual arms. The Japanese were unaware the area they requested, was the now American-occupied Malacañan Palace, and soon afterward were fired upon and several were killed, including Hayashi. On 4 February, the 37th Infantry Division freed more than 1,000 prisoners of war, mostly former defenders of Bataan and Corregidor, held at Bilibid Prison, which had been abandoned by the Japanese.

The Battle of Manila was a major battle of the Philippine campaign of 1944-45, during the Second World War. It was fought by forces from both the United States and the Philippines against Japanese troops in Manila, the capital city of the Philippines. The month-long battle resulted in the death of over 100,000 civilians and the complete devastation of the city was the scene of the worst urban fighting in the Pacific theater. Manila became one of the most devastated capital cities during the entire war, alongside Berlin and Warsaw. The city's capture was marked as General Douglas MacArthur's key to victory in the campaign of reconquest.

To date, it is the last of the many battles fought within Manila's history. This item is in the category "Collectibles\Militaria\WW II (1939-45)\Original Period Items\United States\Field Gear, Equipment". The seller is "premierrelics" and is located in this country: US. This item can be shipped worldwide.