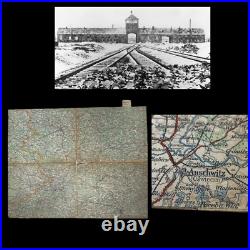 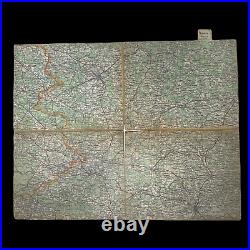 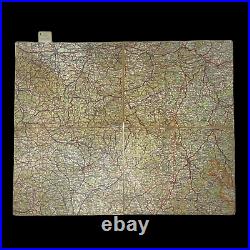 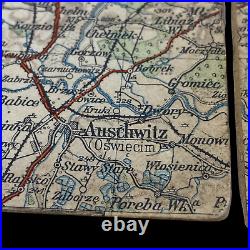 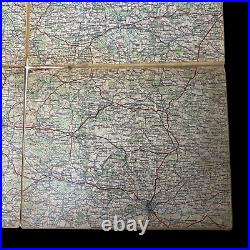 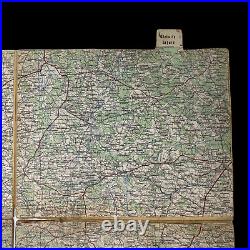 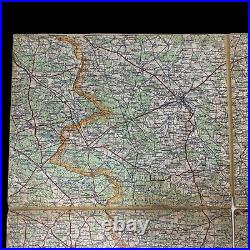 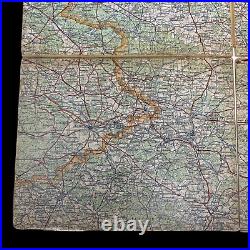 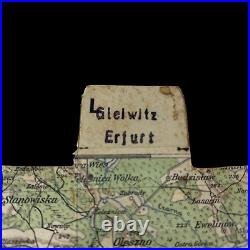 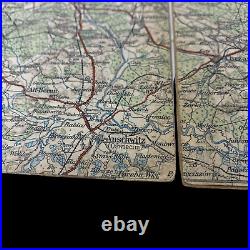 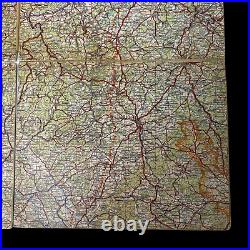 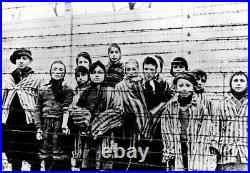 It is extremely rare when a German WWII Auschwitz map comes to market. This incredibly rare World War II double sided German map shows the region surrounding Auschwitz, one of the Germanys most deadly concentration camps during the Holocaust. This German transportation map would have used for the transportation of new Auschwitz concentration camp arrivals or for supplies. This map holds a very grim history. In the lower right section of the map you will see the town "Auschwitz (Oswiecim)".

Auschwitz is the German name for the Polish city Oswiecim. Oswiecim is located in Poland, approximately 40 miles (about 64 km) west of Kraków.

Germany annexed this area of Poland in 1939. The Auschwitz concentration camp was located on the outskirts of Oswiecim in German-occupied Poland.

The Germans initially established the Buna subcamp there in 1942. In 1943, it became a concentration camp. The Auschwitz camp complex also included numerous subcamps. The majority of these subcamps were located in the region around Auschwitz. It is estimated that the SS and police deported at least 1.3 million people to the Auschwitz camp complex between 1940 and 1945. Of these deportees, approximately 1.1 million people were murdered. The best estimates of the number of victims at the Auschwitz camp complex, including the killing center at Auschwitz-Birkenau, between 1940 and 1945 are:Jews (1,095,000 deported to Auschwitz, 960,000 died)Non-Jewish Poles (140,000- 150,000 deported, 74,000 died)Roma (Gypsies) (23,000 deported, 21,000 died)Soviet prisoners of war (15,000 deported and died)Other nationalities (25,000 deported, 10,000- 15,000 died)During the Holocaust, concentration camp prisoners received tattoos only at one location, Auschwitz. Incoming prisoners were assigned a camp serial number which was sewn to their prison uniforms.

Only those prisoners selected for work were issued serial numbers; those prisoners sent directly to the gas chambers were not registered and received no tattoos. This item is in the category "Collectibles\Militaria\WW II (1939-45)\Original Period Items\Germany\Personal, Field Gear". The seller is "premierrelics" and is located in this country: US. This item can be shipped worldwide.