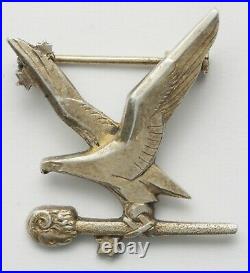 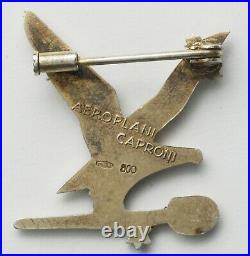 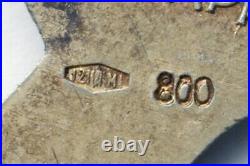 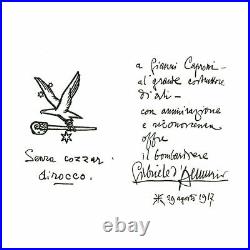 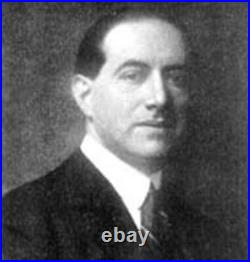 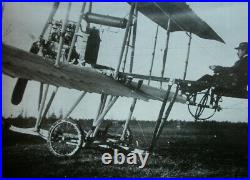 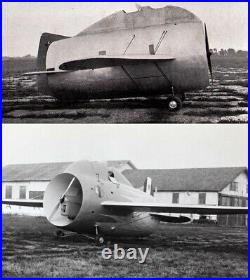 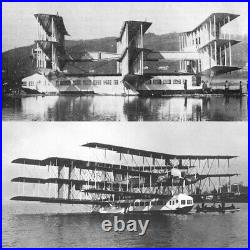 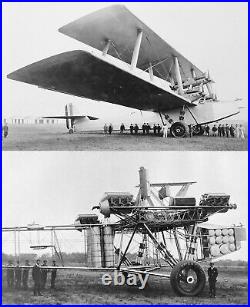 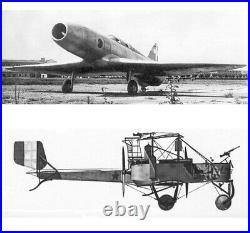 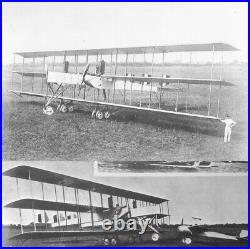 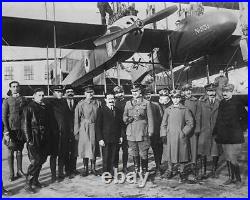 When it ruled by Mussolini and. Was introduced in February 1934. It has fascio sign (a bundle and an axe, the Fascists symbol; Fascist party actually got its name after it) in the middle. Mussolini was deprived of power, and the. Fascio sign was removed from Italian hallmarks in 1944.

This hallmark indicates that the badge was made and use when Fascist rule was in its heyday in Italy. The badge represents the coat of arms of Caproni family.

Gianni Caproni, a pioneer of Italian aviation. He was given the title of Conti di Taliedo by King Vittorio Emanuele III, in recognition of his contribution to the aircraft development of the country and his support of the war industry during the WWI.

Motto Senza cozzar dirocco which may be translated as Destroying without the hustle on the ground(referring to the bombers that Caproni produced with considerable success) were suggested by famous Gabriele D'Annunzio, Italian poet, soldier, aviation enthusiast and prominent fighter pilot of WWI. Gianni Caproni has contributed considerably to aircraft development. Early in 1914 he built the worlds first single-seat, tractor-engine fighter plane to be armed with a forward-firing machine gun. Entered World War I in May 1915, Caproni started developing and producing successful series of bombers, fighters and some giant aircraft. The actual warfare showed the virtues of Caproni planes, and they were ordered and used by Italian, French, British and US Air Forces.

By 1929, Caproni had designed the worlds largest bomber to date, the bi-plane tri-motor Caproni Ca. Was famous for his unusual and odd designs, such as huge flying boat with nine pairs of wings, or flying barrel experimental Caproni-Stipa airplane with propeller placed inside a huge tubular airfoil, a distant ancestor of modern Turbofan engine, and Caproni Campini N. 1, experimental proto-jet fighter plane, the second in world history (first flight in 1940).

During WWII, as well as WWI. Was the principal supplier of planes to Italian Royal Air Force.

His planes dominated the sky in Abyssinian war. In 1943, when his factories found themselves in pro-German. He did not allow them and his workers to be moved to. After the end of the war he was accused in collaboration with the Fascists and had to conceal himself till 1946 when he was cleared of the accusation by the court. Post-war Italian Government preferred to order aircraft from abroad, primarily from.

It led to fast decline of. He looked for support everywhere, and when he met Harry Truman, the President of the.

He was surprised to see big photograph of himself at the wall of Presidents cabinet beside the photo of famous aviator Wright. Truman said the photo was placed there by President Roosevelt in honor of Capronis contribution to world aviation, and he decided to leave it.

However, Caproni could not improve his business situation, and his company ceased operation in 1950. The photographs of Caproni and his planes are for illustration purposes only and are not included in the lot. Photographs (for illustration purposes only). Caproni family coat of arms and motto Senza cozzar dirocco by Gabriele D'Annunzio. Gianni Caproni while personally testing a Caproni Ca.

Group of military officers and Giovanni Caproni(at centre). The item "RARE WWII Italy Aviation Badge AEROPLANI CAPRONI Silver 800 ORIGINAL" is in sale since Friday, January 3, 2020. This item is in the category "Collectibles\Militaria\WW II (1939-45)\Original Period Items\Italy". The seller is "pelin60" and is located in EU, Riga .