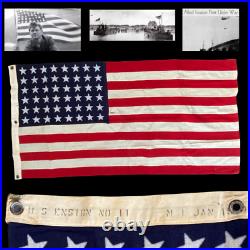 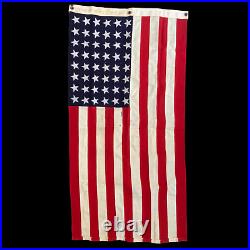 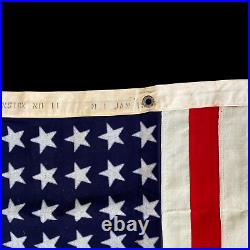 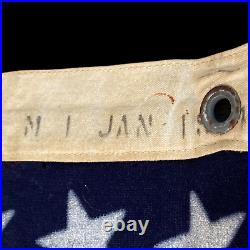 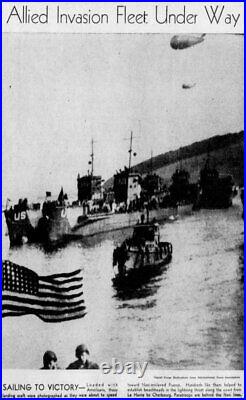 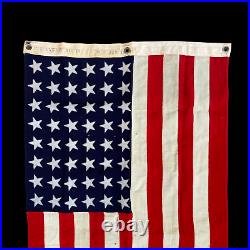 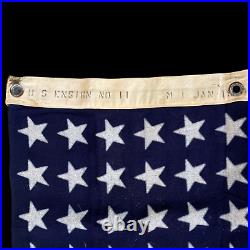 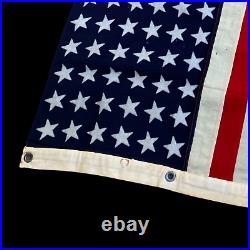 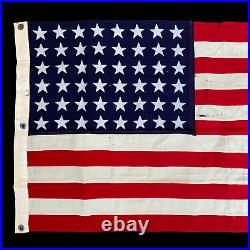 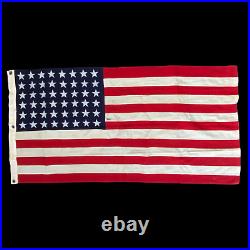 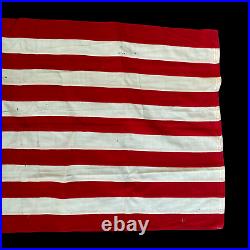 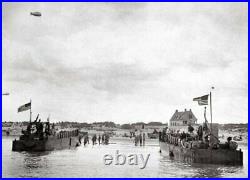 11 marked landing craft (LCI) U. Navy flag shows a good amount of theater use and wear.

This flag has a rare MARE ISLAND stamp mark with the month of production (five months before the D-Day invasion of Normandy, France). With the invasion nearing a large order of these JAN. 1944 flags were placed for the small landing craft infantry craft that would bring American troops ashore on Utah and Omaha beach June 6th, 1944. 11 flag clearly shows the original U. 11 along with the stamp mark MI JAN 1944.

This flag is the exact NO. 11 flag type that amphibious all WWII landing crafts, LCI, LCTs, etc.

Stormed the beaches of Normandy, Italy, Okinawa, Africa, Iwo Jima, etc. With as well as other beachheads in both the ETO and PTO. WWII and Mare Island History.

The Mare Island Naval Station in San Francisco Bay was home to what was known as the Pacific Fleet, however, their flags were used throughout all theaters war during WWII. Mare Islands is highly recognized for providing flags for all of the amphibious assault craft and ships in 1944 for the Normandy landings which were the landing operations and associated airborne operations on Tuesday, 6 June 1944 of the Allied invasion of Normandy in Operation Overlord during World War II. Codenamed Operation Neptune and often referred to as D-Day, it was the largest seaborne invasion in history. The operation began the liberation of France (and later western Europe) and laid the foundations of the Allied victory on the Western Front.

Mare Island Naval Shipyard was the first naval base on the west coast of the United States. It is 25 miles northeast of San Francisco, near Vallejo, California. During WWII the base was used for shipbuilding and repair. There were 46,000 workers employed there during the war. It comprised over 900 buildings, and the base closed in 1996.

The flag loft employed 500 workers, 400 women doing their part by working 8 hours a day 6 days a week. Used landing craft flags from WWII were very sought-after war prizes as talked about by many WWII veterans. Small handfuls of heavily used NO. 11 type flag type is historically documented as being issued and flown on small landing crafts including LCI (Landing Craft Infantry).

This item is in the category "Collectibles\Militaria\WW II (1939-45)\Original Period Items\United States\Field Gear, Equipment". The seller is "premierrelics" and is located in Bloomington, Illinois.