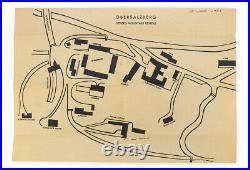 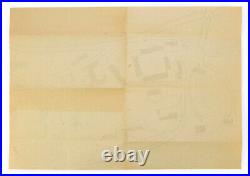 This is a very rare and original WWII soldier's "bring-back" map of Hitler's home. This was an issued map to the soldiers that captured Hitler's house in Berchtesgaden on May 4th, 1945. The map reads " Obersalzberg - Hitler's Mountain Retreat " and measures 8-1/8" x 11-9/16". It is in excellent condition but has been folded. He dated this map " 18 June 1945 " so most likely he was there just after the 3rd Infantry Division and the 101st Airborne raided the home.

On the other items that I have, the soldier put his initials JPB. I looked through some of the 3rd Infantry Division / 7th Infantry Regiment and found a Sgt. John P Bienkiewicz and a James P Bonner of Pennsylvania. I have no idea if either one of them was the soldier but I think with a little research it shouldn't be too hard to figure out.

The last photo shows the original contents list of some of the items he sent back from Germany. A lot of them are German paper items, most of them probably taken from Hitler's house as he had a large library of military history. You can notice on the bottom of the card that it is signed with his initials JPB.

This item is in the category "Collectibles\Militaria\WW II (1939-45)\Original Period Items\United States\Documents & Maps". The seller is "thechocoberry" and is located in this country: US. This item can be shipped worldwide.