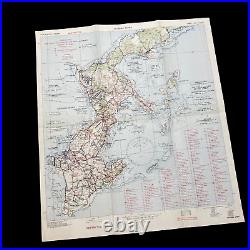 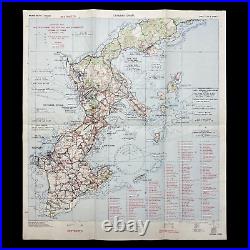 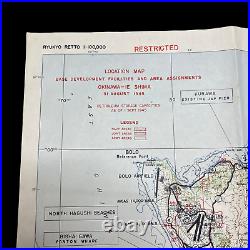 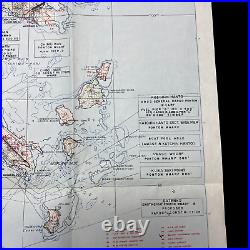 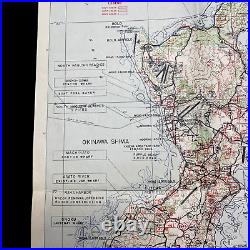 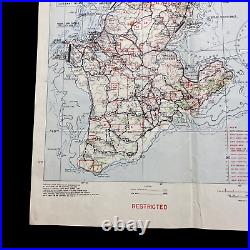 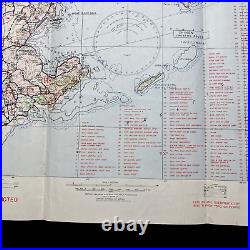 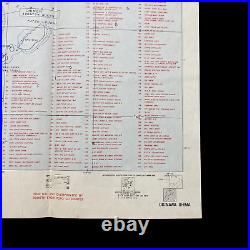 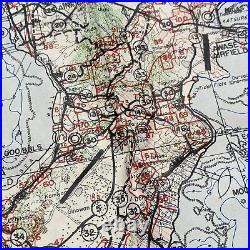 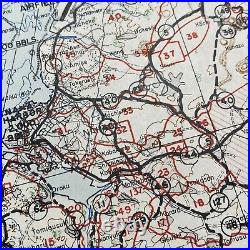 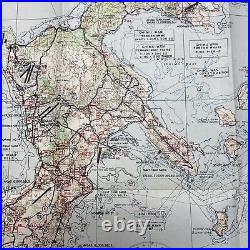 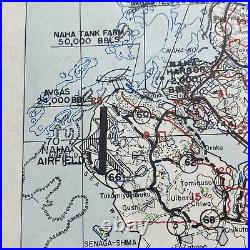 RARE WWII Okinawa Navy and Army staging map in preparation of Operation Downfall (Invasion of mainland Japan). The Battle of Okinawa Japanese:??? , codenamed Operation Iceberg, was a major battle of the Pacific War fought on the island of Okinawa by United States Army and United States Marine Corps (USMC) forces against the Imperial Japanese Army. The initial invasion of Okinawa on 1 April 1945 was the largest amphibious assault in the Pacific Theater of World War II. The Kerama Islands surrounding Okinawa were preemptively captured on 26 March, (L-6) by the 77th Infantry Division. The 82-day battle lasted from 1 April until 22 June 1945. After a long campaign of island hopping, the Allies were planning to use Kadena Air Base on the large island of Okinawa as a base for Operation Downfall, the planned invasion of the Japanese home islands, 340 mi (550 km) away. Marked'RESTRICTED' this very rare WWII Okinawa map shows the 196 numbered landmarks including airfields, ammo dumps, hospitals, signal stations, equipment repair units, etc. Being constructed for the imminent invasion of the Japanese mainland (Operation Downfall).

The map shows staging areas of Navy, Army and Joint Areas. The map also features rare markings done my hand that sections the island into numbered quadrants. Set to begin in November 1945, Operation Olympic was intended to capture the southern third of the southernmost main Japanese island, Kyushu, with the recently captured island of Okinawa to be used as a staging area.

In early 1946 would come Operation Coronet, the planned invasion of the Kanto Plain, near Tokyo, on the main Japanese island of Honshu. Airbases on Kyushu captured in Operation Olympic would allow land-based air support for Operation Coronet.

If Downfall had taken place, it would have been the largest amphibious operation in history. This item is in the category "Collectibles\Militaria\WW II (1939-45)\Original Period Items\United States\Field Gear, Equipment".