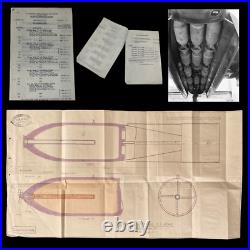 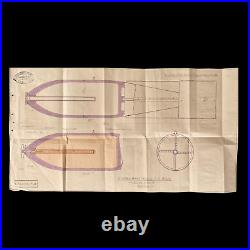 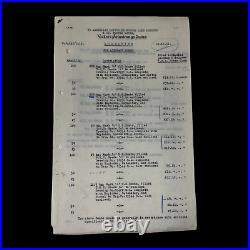 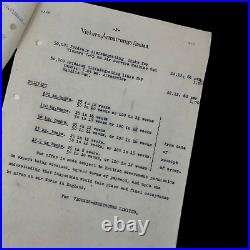 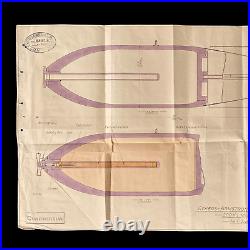 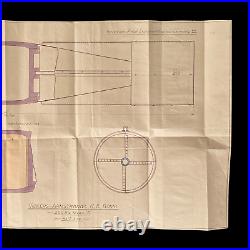 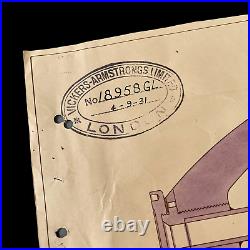 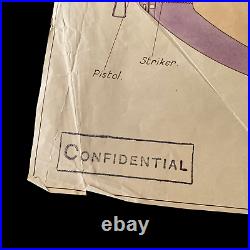 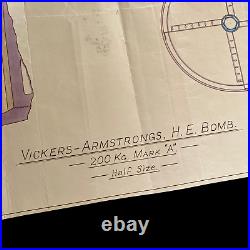 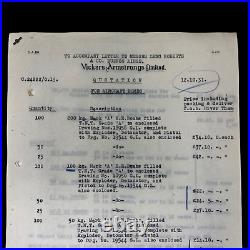 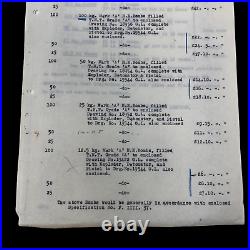 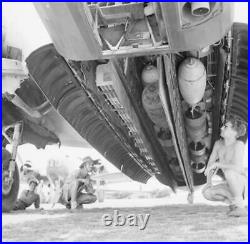 As used in the British Vickers Wellington MK I Medium Bomber, Avro Lancaster Bomber, and many more. This incredibly rare WWII British CONFIDENTIAL "200 Kg Mark A" blueprint from Vickers-Armstong is dated April of 1931. The very large blueprint is drawn to half-scale of one of the most famous aircraft bombs used by the Royal Air Force R.

The blueprint also comes with an original quotation for aircraft bombs to the British Government for hundreds of aircraft bombs 200 kg, 100 kg, 50 kg, 25 kg, 12.5 kg, and 100,000 links for the 7.65 mm air service M. This rare lot set the foundation for the British Area Bombing Directive which was a directive from the wartime British Government's Air Ministry to the Royal Air Force which ordered RAF bombers to attack the German industrial workforce and the morale of the German populace through bombing German cities and their civilian inhabitants. This CONFIDENTIAL British marked blueprint was the transitional point aircraft bomb blueprint that dramatically changed aerial warfare the paved the way for RAF and Allied success during WWII.

During the years following the Great War bombs were still thought of as little more than artillery shells dropped from airplanes. In 1937 a new series of bombs were announced as being adopted by the RAF which were aerodynamically shaped with tail fins, far more suited to being carried and dropped from aircraft. These came in a variety of'sizes' from 40 lb bombs to 250 and 500 lb bombs. For the first two years of the war Bomber Command relied heavily on 250 lb and 500 lb GP high explosive bombs.

The bomb types shown in this blueprint and the original British government order acquisition were used in the Lancaster, one most successful bomber used by the RAF and the RCAF. Weighing 36,900 lbs empty, the Lancaster was capable of taking off with an additional 33,100 lbs of fuel and bombs; in other words, it could almost carry its own weight again. The Lancaster carried 64% of the tonnage dropped by the RAF and RCAF during the War. The "Grand Slam", a 22,000-lb special-purpose bomb designed to penetrate concrete and explode below the surface to create an earthquake effect, could only be delivered by the Lancaster and the Lancaster was thus chosen for special operations such as the "Dambusters" raid and the attack which sunk the German Battleship Tirpitz. Bombs were classified by their CWR (Charge-to-Weight-Ratio) the percentage of explosive compared to the gross weight of the weapon. GP (General Purpose) bombs had a CWR of 30-35% meaning that most of the weight of these bombs consisted of metal casing not explosive. When it was realized that the weight of the bomb casing is a necessary evil, something to be reduced as much as possible this led to the development of new weapons such as the 4,000 HC ('Block Buster') which greatly increased the offensive power of RAF's bombers. MC (Medium Capacity) bombs had a CWR of 40-50% while HC (High Capacity) weapons had a CWR of 75-80%, the latter being essentially explosive packed metal drums. Extensive aerodynamic streamlining was dispensed with since these bombs were carried internally. As already mentioned the 4,000 lb'Block Buster' or'Cookie' was a very effective weapon in this class and after its introduction rapidly became a mainstay of Bomber Command. This item is in the category "Collectibles\Militaria\WW II (1939-45)\Original Period Items\Great Britain\Personal, Field Gear". The seller is "premierrelics" and is located in this country: US.