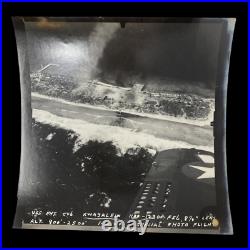 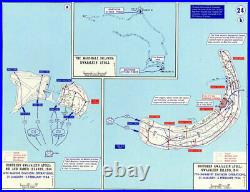 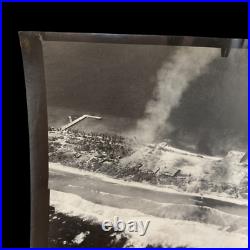 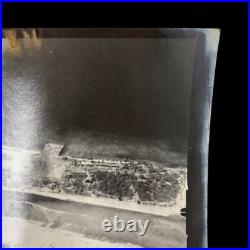 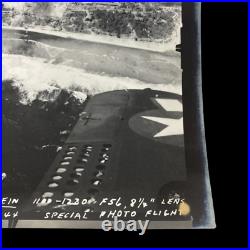 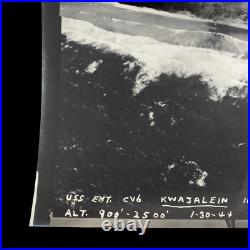 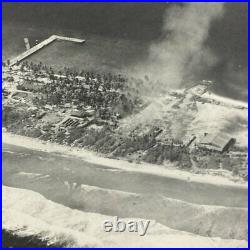 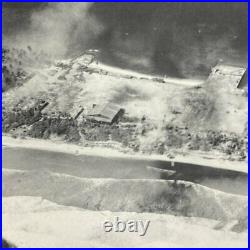 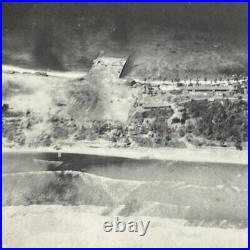 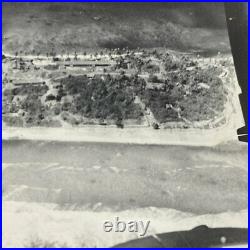 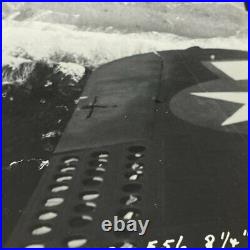 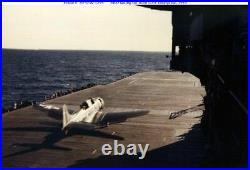 As far as we know this is the only original aerial photograph produced by the USS ENTERPRISE of the special photo recon mission of Kwajalein. There were multiple aerial photographs taken by Lt. Moore and other USS Enterprise pilots during these raids...

But this is the only copy of this specific photograph we have found in any archival or historical database... Making it 1 of 1! This is a VERY rare aerial photograph and WWII artifact... Sure to be the prized piece of your WWII collection! USS Enterprise items rarely come to market and are as rare as some of the most high end WWII memorabilia. Dated January 30, 1944 this original'CONFIDENTIAL' World War II USS Enterprise aerial reconnaissance photograph is marked "Kwajalein" and was taken by a U. Enterprise air group pilot and is also labeled with USS ENT.

SPECIAL PHOTO FLIGHT BY AGC. Taken with a K-17 aerial camera, the K-17 camera was originally designed as an all-purpose aerial camera and was used widely throughout World War II for vertical mapping, photography, and all types of aerial reconnaissance intelligence and bomb damage assessment. Following the pilots combat mission in the area, and their safe landing aboard the deck of the USS Enterprise this photograph was then developed aboard the carrier's photographic development crew and was marked, used, and examined by USS Enterprise pilots such as Lt. Moore and other USS Enterprise high ranking commanders and officers.

It was here he covered the landings and participated in the battles of Eastern Solomons and Santa Cruz Islands. Despite the USS Enterprise being damaged in both battles, USS Enterprise launched Lt. In late 1943 and early 1944, Enterprise took part in the Gilberts and Marshall invasions and air attacks on the Japanese in the Central and Southern Pacific. In the summer of 1944, USS Enterprise participated in the Marianas operation and the Battle of the Philippine Sea, followed with the largest naval battle in history, the Battle of Leyte Gulf in October.

Moore took part in the aerial attack of the Iwo Jima invasion, then raids on the Japanese home islands and the Okinawa campaign in April. Navy warship during the war. Following Japan's surrender, she helped transport U. Servicemen back to the United States. Moore survived the length of the war flying countless aerial combat missions and raids against the Japanese aboard what is considered one of the most infamous U. Like an athlete at the peak of her condition. Was tirelessly in action for the entire year. In January she raided Taroa, in the Marshall islands, and then sailed north to pound Kwajalein atoll in preparation for its occupation. In February, she launched raid after raid against Truk, Japan's feared mid-Pacific fortress, breaking her own record for the tonnage of bombs dropped in a single day, and launching the first night bombing attack in the history of naval warfare. The raid set back Japanese plans for strengthening bases in the West Central Pacific, and provided the first good news after the disaster at Pearl Harbor. The opposite result might have occurred if ENTERPRISE had not successfully evaded two determined bombing attacks from Japanese land-based planes, receiving only minor damage from a near-miss. On 1 November, ENTERPRISE departed Puget Sound for Pearl Harbor where on 10 November she joined the task force which was to support the landings on Tarawa, Makin and Apamama in the Gilbert Islands. On board were newly organized teams of night fighters, "Bat Teams, " each consisting of a radar-equipped Avenger torpedo plane and two Hellcat fighters. ENTERPRISE planes struck at Makin during the three-day period 19-21 November and during the nights of 24, 25 and 26 November her night fighters successfully repulsed attacks by Japanese torpedo bombers against the task force.

ENTERPRISE withdrew on the afternoon of 28 November, her part in the operation against the three islands completed. She arrived in Pearl Harbor 9 December. ENTERPRISE departed Pearl Harbor 16 December to participate in the landings on Kwajalein in the Marshalls. Operating to the south and west of the islands, she provided planes for the bombardment of enemy aircraft and ground installations, for combat air patrol, anti-submarine patrol, photographic reconnaissance and for direct support of landing troops. The Japanese offered comparatively little resistance.

No special night fighters were required and the occupation was completed by 4 February. Comprehensive WWII combat history of USS. The Yorktown class aircraft carrier, USS Enterprise (CV-6) was commissioned at Newport News, Virginia, on May 12, 1938.

Relocating to the Pacific, she was at sea during the Japanese Attack on Pearl Harbor on December 7, 1941. Three days after, she became the first U. Navy warship to sink a Japanese warship, submarine I-70, and later that month participated in the Wake Island expedition.

Decommissioned in February 1947, Enterprise was re-designated (CVA-6) in October 1952 and then to (CVS-6) in August 1953. This item is in the category "Collectibles\Militaria\WW II (1939-45)\Original Period Items\United States\Field Gear, Equipment". The seller is "premierrelics" and is located in this country: US. This item can be shipped worldwide.