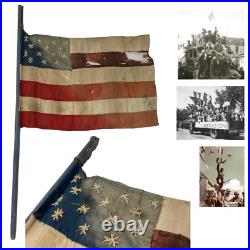 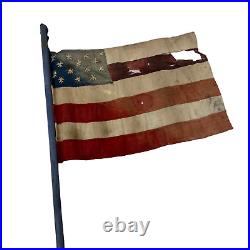 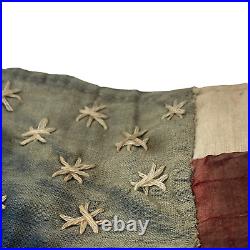 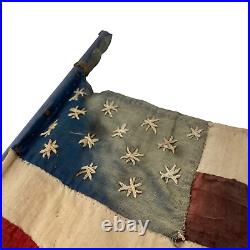 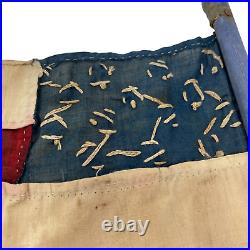 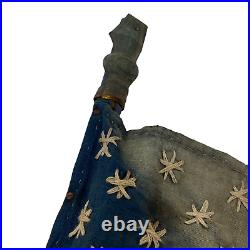 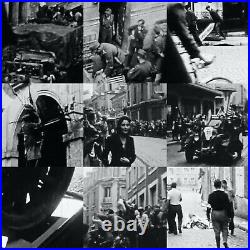 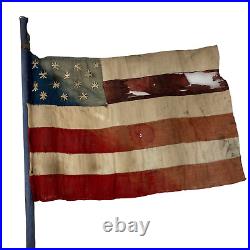 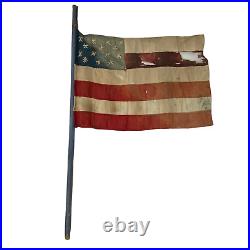 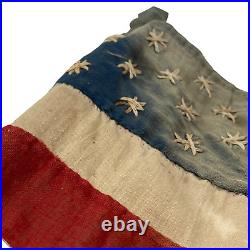 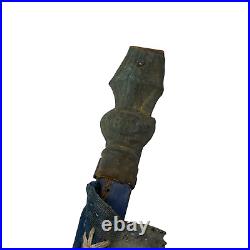 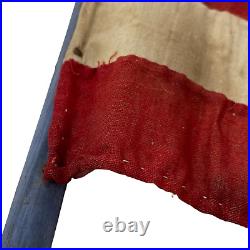 This incredibly rare and museum-grade WWII handmade liberation flag was hastily created and flown for the American and Allied liberation of the Bourges, France in September of 1944 (4 months following the Allied D-Day landings in Normandy). Prior to the Allied landings in June 1944, Bourges was the location of numerous sabotages missions by French Resistance fighters on German radio communications.

The French city of Bourges was occupied by German forced during the initial D-Day landings and Battle of Normandy. Over the next few months as the Allies pushed further into central France the German forces saw increased fighting in this area along with several aerial bombardments of German forces in Bourges by the 445th Bombardment Group (8th Air Force). In anticipation of the Allied liberation of their town, many citizens in France secretly made Allied "Liberation Flags". Their make-do attributes are nearly limitless. A lack of specific knowledge about the flag itself, a lack of time, and a lack of suitable materials in an utterly devastating region combine to result in a collection of flags where nearly every example is unique and rare. French civilians caught making liberation flags during the German occupation were executed immediately. What makes this Bourges, France liberation flag incredibly rare is not only its providence back to the central French town but it is one of very few WWII liberation flags known to exist with the original hand-painted blue wooden stick and improvised metal flag pole topper still attached with the original small nails hammered into the fabric. This liberation flag was also hand-stiched with 14 improved stars done with white string. When an American soldier asked French women why the American liberation flags all had different numbers of stars she responded by saying they weren't always sure how many starts the US flag had so they put as many as they could in the space they had. The blue, white, and red fabric making up the American flag were also salvaged from a variety of different materials and fabrics on hand and also shows clear evidence of being meticulously hand-sewn. From top to bottom the original hand-painted wooden pole measures roughly 20 inches and from side to side the flag measures roughly 12 inches.

In the black-and-white collage photo, you will see actual images of Bourges, France during the town's Allied liberation in 1944. Some of these videos were secretly captured from the cracks in walls or windows by French civilians of the German soldiers unloading weapons, carrying equipment, as well as their retreat in newly camouflaged vehicles as the Allies neared the city.

You also see liberation flags being brought out and as the Amerian, French, and British flags being hung from cathedrals and windows during the liberation. German signs are being ripped off and kicked by Bourges civilians as well as burning German documents in the street. On one, you can see Allied soldiers driving over a hung framed photo of Hitler. You can also see civilians waving allied flags in front of storefronts and cars as well as fully equipped American soldiers and parachutists pass through on American Jeeps and other allied vehicles. These images are researched and digital images from the original video.

This incredibly rare hand-sewn World War II French liberation flag done for the liberation of Bourges, France from German divisions would make an incredible addition to any World War II collection. Please note that this flag comes with a certificate of authenticity and photo verification for double authentication purposes. This item is in the category "Collectibles\Militaria\WW II (1939-45)\Original Period Items\United States\Field Gear, Equipment".