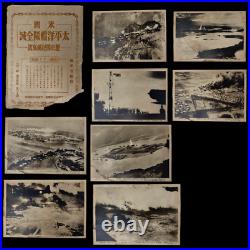 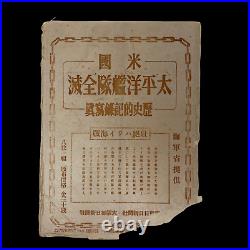 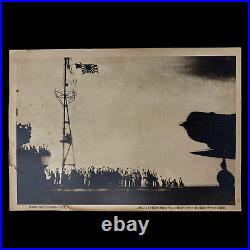 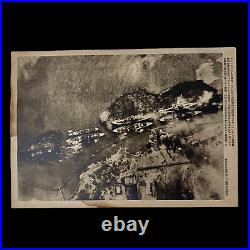 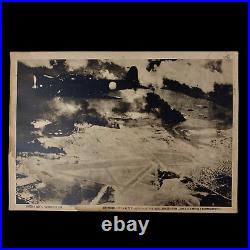 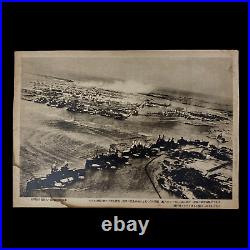 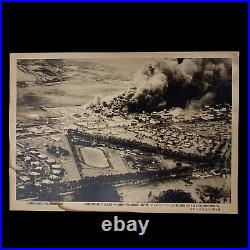 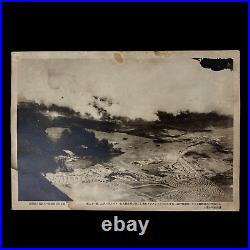 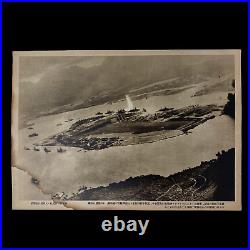 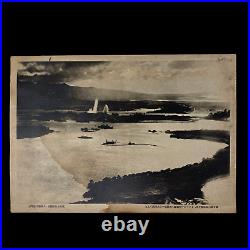 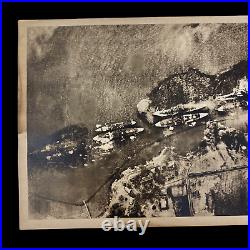 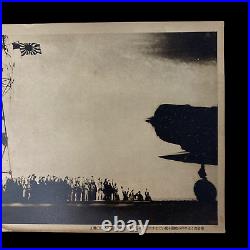 Titled "Annihilation of United Staes Pacific Fleet" this 1st Edition 1942 EXTREMELY RARE Japanese Pearl Harbor propaganda set is one of only a few to still known to exist. This original propaganda photograph series was produced immediately following the successful Japanese attack of Pearl Harbor on December 7, 1941.

This propaganda series was meant to commemorate the Japanese attack force and their pilots on the successful Japanese destruction and damage of the nearly 20 American naval vessels, including eight battleships, and over 300 airplanes. More than 2,400 Americans died in the attack, including civilians, and another 1,000 people were wounded.

Each of the propaganda photographs contains a rare and unreleased/unseen photo taken from the Japanese attacking planes. The photographs show rare glimpses of what the Japanese pilots saw attacking battleship row, Ford Island Naval Air Station, and other ground installations nearby. Each photograph in this collection measures around 7.5 inches wide by 10.5 inches long. Full Translation of Japanese Propaganda Series. Picture of death throes of US fleet taken from sky.

Top is sunken USS Oklahoma. Second is bombed USS Oklahoma. Third is USS California which scraped away half of starboard. Lower right is ruined USS Maryland by a torpedo. View of enemy main fleet.

Our mighty bomber is flying leisurely over Pearl harbor. Battleship is enveloped in smoke in the bay. Ground is Hickam Air Force Base. Scene of ruination of United States Pacific Fleet.

White smoke is rising at Hickam Air Force Base. Wheeler air force base is blasted with us at Pearl harbor. A black fog blanketed the port.

A black fog blanketed Wheeler air force base by fierce attack of our mighty wild eagle. Parting with consort plane prior to the sortie on warship. This value is noted to increase significantly within the next few years. This collection would look amazing framed behind glass or in a WWII museum. This Pearl Harbor set is sure to be one of the prized possessions of any World War II collection. Please note that the original rice paper sleeve is extremely delicate and should be handled with the most care. This item is in the category "Collectibles\Militaria\WW II (1939-45)\Original Period Items\Japan\Other Japanese WWII Orig Items". The seller is "premierrelics" and is located in this country: US. This item can be shipped worldwide.