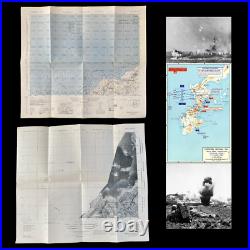 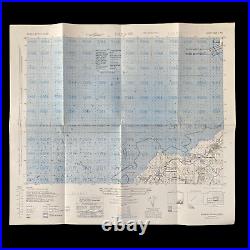 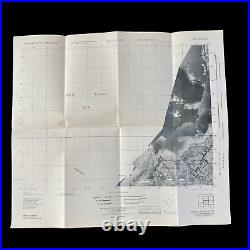 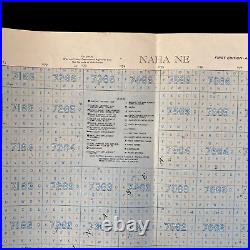 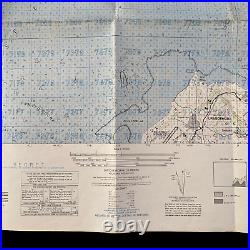 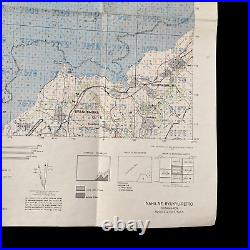 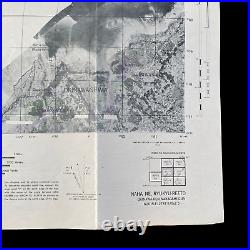 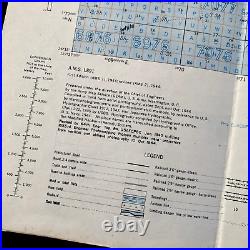 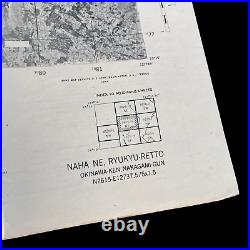 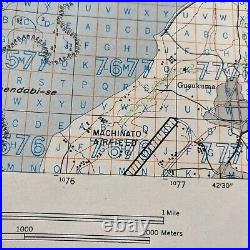 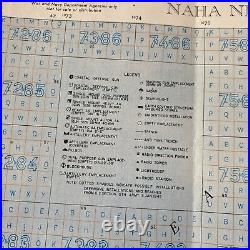 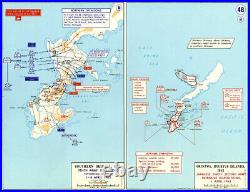 This WWII original and extremely rare "SECRET" double-sided gunnery target map/aerial photograph overlay is a rare print "FIRST EDITION - AMS 2" target map used for both naval, air, and ground artillery fire coordination during the Battle of Okinawa (Operation Iceberg). Other than slight folds this SECRET Okinawa target map (double-sided) is one of only a small handful in the world known to exist in in extremely rare almost mint-condition. Using this exact SECRET target map to provide the most accurate firing coordinates over the course of the Okinawa Campaign the U.

Navy warships fired almost 300,000 rounds of five-inch or larger shells. The warships were aided in bombing efforts by the aerial squadrons of Task Group 58 whose aircraft flew over 40,000 sorties and dropped 8,500 tons of bombs and fired approximately 50,000 rockets.. This target map was one of the most intricate target maps created during the Pacific theater campaign. Using the most updated aerial photography photographs of the island this map details JAPANESE COASTAL DEFENSES, HEAVY AA, ARTILLERY EMPLACEMENTS, PILLBOXES, BLOCKHOUSES, MACHINE G. EMPLACEMENTS, RADAR, AIRFIELDS, RARIO TOWERS, ANTI TANK TRENCHES, ETC. The invasion of Okinawa was the largest amphibious assault in the Pacific Theater of World War II. This target map was used during the "softening up" of Okinawa and Japanese defenses prior to the amphibious assault and D-Day landings as well as being used extensively during the duration of the U. Battle of Okinawa (April 1-June 21, 1945), World War II battle fought between U. And Japanese forces on Okinawa, the largest of the Ryukyu Islands. Okinawa is located just 350 miles (563 km) south of Kyushu, and its capture was regarded as a vital precursor to a ground invasion of the Japanese home islands. Dubbed "the Typhoon of Steel" for its ferocity, the battle was one of the bloodiest in the Pacific War, claiming the lives of more than 12,000 Americans and 100,000 Japanese, including the commanding generals on both sides. In addition, at least 100,000 civilians were either killed in combat or were ordered to commit suicide by the Japanese military. As the campaign on Iwo Jima was drawing to a close in March 1945, U. Commanders marshalled strong army, air, and naval forces in preparation for Operation Iceberg, the invasion of Okinawa. The island, which is about 60 miles (roughly 100 km) long and no more than 20 miles (32 km) across at its widest point, had been thoroughly fortified by a Japanese garrison of some 100,000 men under the command of Lieut.

Acknowledging that the battle for Okinawa would very likely replicate the brutal losses of Iwo Jima on a much greater scale, American planners hoped to overwhelm the Japanese with a massive preliminary bombardment and the largest amphibious landing conducted by the U. The air and sea attacks that preceded the invasion had begun as early as October 1944, and Allied air operations carried out in March 1945 by carrier Task Force 58 under Rear Adm.

Marc Mitscher destroyed hundreds of Japanese planes. While these losses reduced the Japanese defenders' ability to challenge the Americans in the skies over Okinawa, the Japanese retained sufficient air power to stage devastating suicide attacks on Allied naval units.

On March 26 a preliminary landing was made on the Kerama Islands, about 15 miles (24 km) to the west, where some 350 small boats had been assembled for suicide attacks on the landing force. Another preparatory landing was made on Keise, a collection of coral islets just 11 miles (18 km) southwest of the main invasion beaches.

From Keise, American 155-mm Long Tom artillery batteries could provide fire support across most of southern Okinawa. Over the final days of March, American underwater demolition teams and minesweepers cleared obstacles from the landing beaches. Under the overall leadership of theatre commander Adm. Chester Nimitz, Fifth Fleet commander Adm. Raymond Spruance would oversee the landings and U. Ground troops would be commanded by Lieut. The invasion was launched on April 1, 1945, when a contingent of U. Ground troops landed at Hagushi, on the west coast of central Okinawa. Before nightfall, some 50,000 men of the U. 10th Army, under the command of Buckner, had gone ashore and established a beachhead about 5 miles (8 km) long.

The Japanese response to the beach landings was deceptively muted, and by April 4, U. Army troops and Marines had cut the island in two.

The first major Japanese counterattack came on April 6-7 in the form of suicidal raids by more than 350 kamikaze planes and the battleship. The Japanese had hoped that. Might finish off the Allied fleet after it had been weakened by the wave of kamikazes, but, with no air cover, the largest battleship ever constructed was easy prey for Mitscher's carrier-based planes. On April 7 conclusively signaled the end of the "all-big-gun" battleship era of naval warfare.

In the seas off Okinawa on April 12. Elements of the 10th Army drove cautiously to the north and had pacified the entire northern two-thirds of the island by April 22. Forces suffered perhaps their highest profile casualty of the battle when journalist Ernie Pyle was killed in combat. Pyle, whose coverage of the European conflict had made him one of the most beloved war correspondents of World War II, had accompanied the 77th Infantry Division in an assault on Ie, an island just west of Okinawa.

On April 18, while traveling to a forward command post, Pyle was mortally wounded by Japanese machine-G fire. Intensification and collapse of Japanese resistance. The elements of the 10th Army that had moved south toward the main population centres of Naha and Shuri encountered the fiercest kind of resistance. As on Iwo Jima, the Japanese fought with great tenacity and succeeded in making the Americans expend heavy casualties for small gains.

The Japanese force defending the Naha-Shuri area numbered about 60,000, and by May 1 these troops were confined to an area of about 90 square miles (about 230 square km) at the island's southern tip. Combat in this sector was positional; both sides used fixed lines, and defenders held the clear advantage of fighting from prepared positions. The Japanese also made extensive use of Okinawa's caves, which afforded excellent shelter against American bombardment. Tactically, the Americans relied heavily on the superior quantity and quality of their equipment. Making frontal assaults on enemy positions, U.

Forces advanced in waves by day with heavy artillery support. Flame-throwing tanks led infantrymen against Japanese-held caves, which had to be destroyed one by one. At night, ground activities were limited to patrolling operations and artillery bombardment. As the Japanese neither took prisoners nor generally offered themselves for surrender, close-quarter fighting on Okinawa was savage and waged to the death. The intensity of the campaign was reflected in the battle for "Chocolate Drop Hill, " a fortified Japanese mound guarding the approaches to Shuri.

American forces fought their way to the base of this 130-foot (40-metre) hill three times in five days and were thrown back each time. In one six-hour period, land and naval guns blanketed the hill with 30,000 shells, while bombers showered it with additional tons of high explo. These long-range efforts to dislodge the defenders were futile, however, and ground troops had to destroy each Japanese fortification singly, an operation that was tedious, costly, and dangerous.

On one side of the hill alone, the Japanese had some 500 entrances to their underground positions, and dyn. Charges were used to seal these openings. The hill was finally taken by U. The heavily fortified Japanese line, running through Naha on the western coast through Shuri and to Yonabaru on the eastern coast, repelled numerous American attacks. On May 12, however, U.

Forces broke into Naha's suburbs and proceeded to enter the city, fighting from house to house. Even more intense was the battle for Shuri, keystone of the Japanese fortifications. Shuri fell on June 1, and the important Naha airfield was in U. Despite the breaking of the main Japanese fortified line, opposition did not weaken, and the defenders gave ground grudgingly. However, Japanese manpower was being rapidly exhausted-by mid-June, the largest part of the defending garrison had been killed in action.

On June 21 major combat operations ended. In the end, the Japanese lost Okinawa simply because they had run out of caves and boulders from which to fight and men to do the fighting. The stiffness of the opposition is reflected in the following timetable: from April 4 to May 26, U.

Forces on southern Okinawa had advanced only 4 miles (6.4 km). It took them from May 26 to June 21 to cover the remaining 10 miles (16 km) to the southern tip of the island. The Americans regarded Okinawa as one of their greatest victories during the Pacific campaign, but the price paid by both sides was enormous. American casualties numbered some 12,000 killed and 36,000 wounded. Ground commander, was killed in action on June 18 while visiting a forward observation post.

He was the highest-ranking U. Officer killed by enemy fire during World War II. Kamikaze aircraft, which had first appeared at the Battle of Leyte Gulf in October 1944, made their peak effort against U. Warships and transports at Okinawa. Strategically, the kamikaze was a last-resort weapon that Japanese planners hoped would cripple the American fleet and forestall the scheduled invasion of the Japanese home islands. Naval officers' characterizations of the kamikaze attacks had initially minimized their effectiveness. Mitscher declared as late as June 5 that the attacks were not "too serious" and that only 1 percent had reached their targets. This figure proved to be a significant understatement. While other naval officials also belittled the effect of kamikaze attacks, they did admit that the use of this novel weapon by the Japanese would require changes in U.

Casualties among naval personnel were also extremely heavy. Of the 12,281 Americans reported killed in the Okinawa campaign, 4,907 were U.

This figure outstrips the battle deaths suffered by both the U. Army (4,582) and Marines (2,792) who participated in the punishing ground offensive. The Allied naval blockade had effectively closed the home islands to foreign imports, and Gen.

Curtis LeMay's strategic bombing campaign had reduced many Japanese cities to rubble, but the Japanese military refused to consider surrender. Based on the experience at Okinawa, American planners conservatively estimated that the U. Would suffer 225,000 casualties during an invasion of the Japanese home islands; more pessimistic assessments pushed this figure to 1,000,000. Upon succeeding to the U. Presidency after the death of Franklin D.

Roosevelt on April 12, 1945, Harry S. Truman was made aware of the Manhattan Project, the top secret U. Truman told his staff that he hoped that "there was a possibility of preventing an Okinawa from one end of Japan to another, " and this no doubt played a large role in his decision to use the atomic bomb. In early August 1945 the United States dropped atomic bombs on Hiroshima and Nagasaki, and the Japanese surrendered on September 2, 1945.

Even after the handover, the U. Maintained sizable military bases on Okinawa into the 21st century. Bases there figured prominently into the shared U. Japanese defense posture in the Pacific, there was significant local opposition to the continued presence of thousands of U.

Troops more than 70 years after the war. This item is in the category "Collectibles\Militaria\WW II (1939-45)\Original Period Items\United States\Field Gear, Equipment".