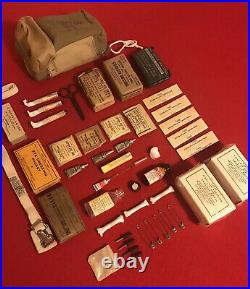 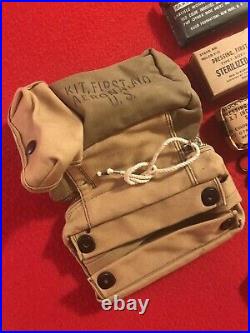 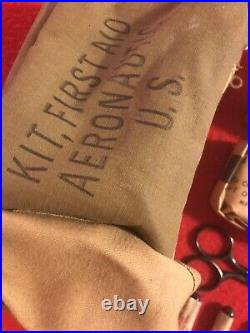 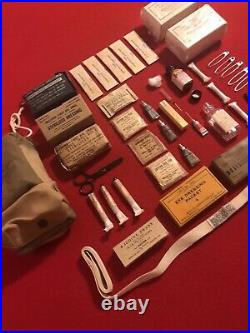 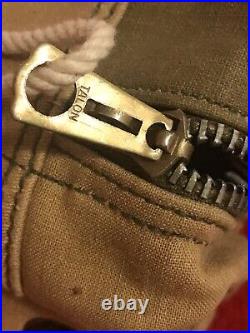 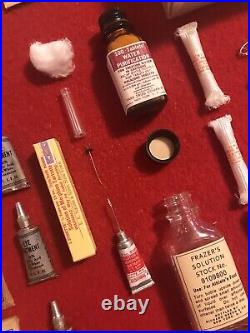 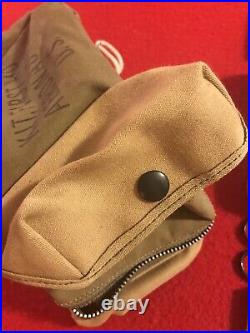 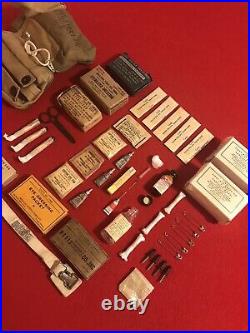 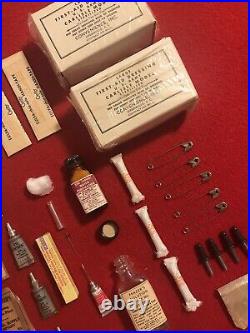 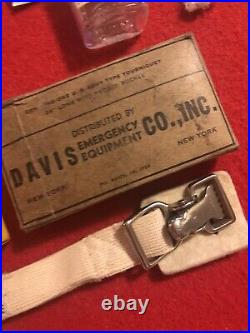 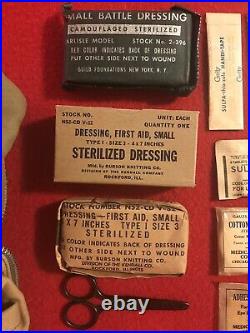 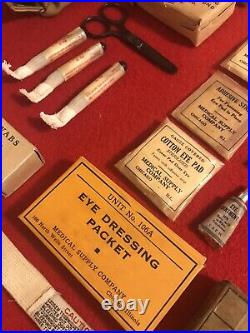 Here is the very EARLIEST of THREE (3) versions of this AERONAUTIC First-Aid CASE! This is the first one made ow both Golden KHAKI and Light Shade OD#3'Waterproof,' Rubberized Laminate-Canvas!

COMPLETE with the ORIGINAL Lift-the-Dot Studs in a glassine envelope! To screw into the Bulkhead of a Bomber or the Wall of Fighter cockpit!

The finish on the "United Carr" GLOVE SNAP for the Outside Pocket is in perfect condtion. ZERO holes, tears, frays, problems with seam separations, stains, markings! The Brass TALON Pull on Zipper Slider has a Cotton USMC/USN Tie Tie with metal seized ends. This has the "Lift-the-Dot" Fasteners that have the brand-name PRINTED on them unlike the later generations which only have the single indented'DOT.

Bandages, medical supplies, and containers. LABEL --which is on an ORIGINAL 1940s "Duraglas/ OWENS-ILLINOIS" 1 oz.

Background information from the WW2 Medical Research Centre. Issued to almost every aircraft, one to each aircraft station, while.

States, that a minimum of five Kits was required per aircraft. However photographic evidence exists showing that these kits were certainly carried in greater numbers in troop carrying aircraft. The Kit was installed in an airplane on the basis of 1 Kit for every two men, or 1 per crew member at an isolated Station, within easy access of crew members (and passengers).

Bombers would normally have 4 Kits per plane, while Fighters would have 1 Kit per plane. Availability of such Kits on numerous occasions saved lives by enabling prompt emergency treatment of injuries. The canvas rectangular case closed with a zipper (when completely opened, it allowed to unfold the container) and seal bearing the proper MD identification and consisted of two separate large compartments, with a smaller separate pouch closing with a press stud, while the outside envelope also contained some limited medical items. The rear was foreseen with a large canvas loop (in fact a sort of handle), and stitched onto a rectangular flap with four.

Fasteners, two at the top, and two at the bottom, which clicked into four male fasteners located at some specific spots for securing the Kit to the aircrafts bulkhead. There was an early version, in khaki-colored canvas. Was installed in ALL combat, cargo, transport, training planes, and gliders at the Factory! The Kit was to be placed on board the aircraft (it was recommended to check its presence before any mission); it was always to be sealed (wire sufficiently small to be broken in case of emergency); it was to be stowed in its designated location (easily accessible); and if missing, it was to be replaced prior to flight.

Morphine Syrettes, Sulfanilamide, and Halazone Tablets were to be removed from training aircraft, but NOT from combat planes. The rear was foreseen with a large canvas loop (in fact a sort of handle), and stitched onto a rectangular flap with four Lift-the-Dot fasteners, two at the top, and two at the bottom, which clicked into four male fasteners located at some specific spots for securing the Kit to the aircrafts bulkhead.

There was an early version, in khaki-colored canvas , followed by an olive-drab version, and a late war/postwar waterproofed version, with only minor modifications. 1 Earliest KHAKI model "CASE, ZIPPERED, SECTIONED INTERIOR, EXTERIOR POCKET with Durable Dot Snap, with Carrying Handle, and 4 "Lift-the-Dot" female SNAPS (to facilitate attachment to Aircraft Bulkhead)" and the 4 male STUDS to screw onto the aircraft.

1 SULFADIAZINE LEDERLE, 8 (Wound) TABLETS, CODE OMYSS LOT NO. 752 H 10, FOR U. ARMY USE ONLY, LEDERLE LABORATORIES INC. With Instructions on the reverse.