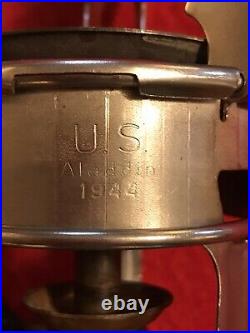 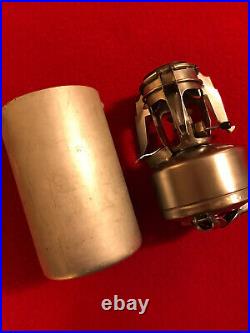 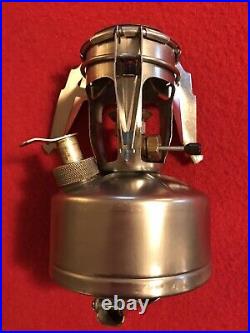 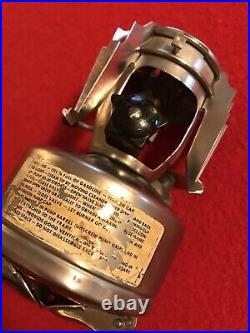 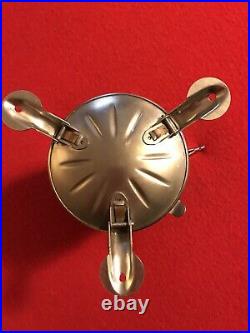 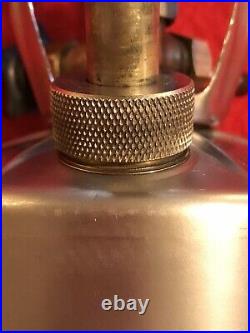 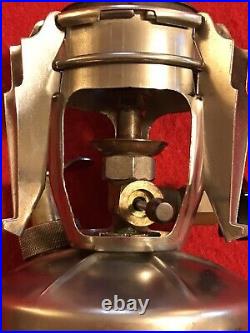 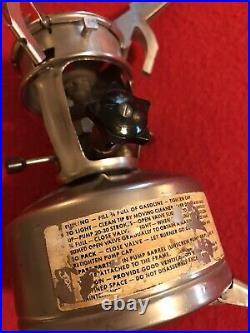 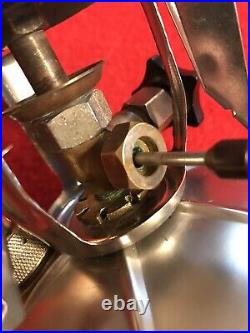 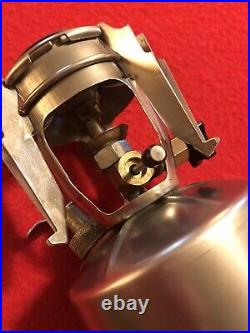 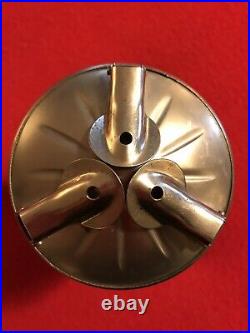 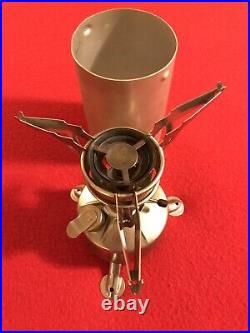 / ALADDIN /1944 Gas Single Burner M1942 - MOD. Variant with the (1) EARLY Windscreen unlike all the other 1944 and 1945 models with the MISSING model designation!! And (2) the radius-cut Pot Support Arms where they join the Windscreen! This is an EXCEPTIONALLY clean and FULLY FUNCTIONING, WORKING stove! No Wrench or Spare Part container.

Included is the Tall ALUMINUM BOTTOM Section only, CARRIER / COOKING POT marked C. It is in NEAR MINT++ Condition! Contrary to what many collectors have concluded about its association with Mountain/Ski troops, this Stove was designed not just for Mountain/Ski troops, but to be made available to all ground troops: Armored personnel, Rangers, Paratroopers, etc.

This was the lightweight answer to foxhole cooking needs. " This Stove was also referred to as a "G. ALADDIN (The Mantle Lamp Company of Chicago, established in 1908) was one of three contractors of this improved "M1942 - MODIFIED" Stove. (1) Coleman Appliance who only produced stoves in 1944.

(3) Aladdin, 1944, 1945 production years. But ONLY ALADDIN produced a model in 1944, the first of production of this "MODIFIED" Stove, that did NOT have the designation of M-1942-MOD. Stamped into the Steel, which makes this model and this year a significant variant! None of the COLEMAN APPLIANCE Stoves... None of the PRENTISS-WABERS Stove... And none of the 1945 production-year ALADDINS have the unique radius-cut Pot Support Arms and the missing model designation! In June 1942 the Army Quartermaster Corps issued an urgent request : field troops needed a compact stove that could operate at 125 degrees above and 60 degrees below zero, was no larger than a quart bottle of milk, and could burn any kind of fuel.

Moreover, the Army wanted 5,000 of the stoves delivered in two months. The end product was better than the Army had requested: the stove could function at 60 degrees below and 150 degrees above Fahrenheit; it could burn all kinds of fuel; it weighed a mere three and one-half pounds; and it was smaller than a quart bottle of milk. The first order for 5,000 units was flown to U.

Forces involved in the November 1942 invasion of North Africa. Ernie Pyle, the famous World War II journalist who wrote about the common man's experience in the war, devoted 15 articles to this compact "single-burner pocket stove" and considered it one of the two most important pieces of noncombat equipment in the war effort, the other being the Jeep! The remnants of the ORIGINAL Decal remain (--yes, there are reproductions of vinyl or paper).

This highly perishable, bordered " Yellow" INSTRUCTIONAL DECAL rarely survived exposure to heat and fuel, or were scratched up extremely easily. This "combat veteran" is the'real deal' and not a facsimile! The glistening, bright Stainless Steel TANK is completely free of dents, "dings, " scratches, rust, corrosion, or damage of any sort! The Folding Steel LEGS , and supporting ARMS are in perfect shape, operate smoothly, and are free of heat discoloration and carbon buildup! The Brass FUEL CAP and Pressure PUMP ASSEMBLY are free of tarnishing and in absolutely perfect condition.

The Leather GASKET in the Pump is supple and works smoothly, generating excellent pressure! From the exceptional summary, " SklColorado: Steve's Life in Colorado".

By the time the Africa campaign began in 1942, construction of Camp Hale in Colorado, was pretty much completed and U. Ski troopers were being trained in skiing, climbing, winter survival and ordinance. Camp Hale eventually became known for its 10th Mountain Division. Somewhere, in this same timeframe, Bestor Robinson , a lawyer, mountaineer and director of the Sierra Club in California prior to WWII, was assigned to a team at the U.

Army's Office of the Quartermaster General with the role of improving clothing and equipment for the Army's mountain divisions. The team was led by Robert Bates , who was an avid mountaineer, and it's worth reading his short bio! During this time Robinson was granted patents for the design of a compact stove, which is regularly called the "mountain stove" by many today.

His patent designs for the stove and various parts of it can be found by searching the web for these numbers: Patent No. The contract to build the new little stove was awarded to the Aladdin Industries subsidiary of The Mantle Lamp Company of America or Mantle Lamp themselves, and manufactured under the name Aladdin , similar to the parent company's well-known lamps. It's kind of confusing exactly who made it, since The Mantle Lamp Company made Aladdin lamps, and they had a subsidiary with the same name, plus, Mantle Lamp eventually merged with Aladdin. Aladdin is still in business today. You may be familiar with some of their products which sell under the Stanley vacuum bottle name and other food and beverage containers.

The first model of the stove is commonly called the wheel stove , by many collectors, because of the horizontal wheel used to operate the stove's burner. My understanding is that the wheel design was to allow troopers to operate the stove in cold weather without removing their gloves or mittens. This model was only made by Aladdin and only in 1943.

For reasons unknown to me, the stove was modified from the wheel design to one somewhat more conventional after only one year, particularly in the valve stem. This second stove model is known, and is stamped, as the M-1942 MOD , where'MOD' denotes'modified. The model was also produced by Aladdin in 1944, and Prentiss Wabers a. Known as Preway of Wisconsin Rapids, Wisconsin and possibly by one other company (possibly Coleman), however, I have been unable to confirm this.

In 1945, the M-1942 MOD was produced by Aladdin, Prentiss Wabers and Coleman. Coincidentally, Aladdin and AGM/Thermos ended up in court over the right to manufacture vacuum bottles in the late 1950s. It seems that the term thermos became a generic name, much the same way that the word Kleenex is used instead of facial tissue, or when Xerox was a generic term for making a duplicate paper copy. I've never seen manufacturing year stamps past 1945, so it appears that the stove was very short-lived with a production run of only three years; one year being the wheel stove and two years as the MOD-ified stove.

The 1943 wheel stove is rather rare and is often found badly rusted since Stainless Steel was not used in its fabrication. What gives this stove such a long life, is that it is mostly stainless steel and brass. Unlike other stoves of the same era, which have steel founts (tanks), steel pot-support/burner frames, and steel tip-cleaner stems, this stove doesn't get destroyed by rust.

However, I've worked on two 1943, M-1942 "Wheel" Stoves , which is the early model, and it is not made of stainless steel and can have rust in places where the zinc has worn off. The stove itself is a good design and I've found it reliable and enjoyable to use. The tank is stainless steel and I've never seen the M-1942 MOD with rust in it or on it.

It will typically need a good cleaning, especially because it was designed to run on regular gasoline and was regularly used with that fuel. The gasoline will leave sediment in the tank and generally clog the vaporizer screen. It had a spirit cup for pre-heating the vaporizer a. Generator, folding feet, folding pot support arms, and an 8 ounce tank. Robert Bates, contributor to the design of the M-1942- MOD.

Stove and other WWII U. Bates was born in Philadelphia and was the son of William Bates, a classical scholar at the University of Pennsylvania. He briefly attended the William Penn Charter School , and then Phillips Exeter Academy. He attended Harvard University from 1929 to 1935. At Harvard he was a member of the Harvard Mountaineering Club and with Charles Houston, Adams Carter, Bradford Washburn and Terris Moore was part of the group of climbers later known as the "Harvard Five" who would push forward the standards of American mountaineering in the 1930s. In 1937 Bates, with Bradford Washburn, made the first ascent of Mount Lucania in Yukon, which was then the highest unclimbed mountain in North America. It was also one of the most remote and inaccessible and had been declared "virtually impregnable". The pair enlisted the aid of the pilot Robert Reeve to fly them to the mountain, but when they landed on the Walsh Glacier the aeroplane sank into the unexpectedly soft snow. After they had spent five days digging it out Reeve departed, warning Bates and Washburn that he would not be able to return to collect them as planned and that they would have to walk back to civilization. The pair climbed Mount Lucania , and the nearby Mount Steele, and were then faced with a 100-mile (160 km) trek through wilderness to Burwash Landing , without maps. They abandoned some of their food to save weight, expecting to restock at a cache left behind by an earlier expedition. However, the cache had been plundered by bears, and Bates and Washburn survived on mushrooms and squirrels during the trek out.

Flooded rivers forced them to detour many miles out of their way, and they had eventually walked an estimated 156 miles by the time they reached Burwash Landing , 32 days after arriving on the glacier. The two men lost around twenty pounds each during the walk out. In 1937, Charles Houston invited Bates on an expedition to K2 for 1938, the world's second highest mountain. It was the first expedition to the mountain for nineteen years, and while the focus was on reconnaissance and assessing the feasibility of different routes, Bates was part of a group which reached within 800 m of the summit on the Abruzzi Spur , which would become the preferred route on the mountain.

The expedition failed due to bad weather and the illness of Art Gilkey, but was widely praised for the courage shown by the team in their unsuccessful attempt to save Gilkey. During the descent, Bates and five other climbers were involved in a near-fatal fall, saved only by the strength of Pete Schoening, who was the last man on the rope. Bates later received the David A.

Sowles Memorial Award for his part in the attempted rescue. During the Second World War Bates served in the United States Army and was assigned to the Office of the Quartermaster general, where he worked on the development of improved equipment and clothing for the army's mountain divisions. He recruited a skilled wartime team that included mountaineers William P. Wood III, Bestor Robinson , H.

Adams Carter, Terris Moore, Bradford Washburn and Australian arctic explorer Hubert Wilkins. He reached the rank of Lieutenant Colonel and was awarded a Bronze Star and the Legion of Merit. After the war, Bates taught English at Phillips Exeter Academy. He continued mountaineering throughout his life, and at the age of 74 led an expedition which made the first ascent of Ulugh Muztagh in China.

He also spent a year in Kathmandu directing a Peace Corps project, and served as president of the American Alpine Club , which awards the Robert Hicks Bates Award to promising young climbers in his honour. Bates was the author of several books. With Charles Houston he wrote accounts of their two K2 expeditions as Five Miles High and K2 - The Savage Mountain ; the latter being regarded as a mountaineering classic. He also wrote Mystery, Beauty, and Danger , a study of mountaineering literature, and Mountain Man: The Story of Belmore Brown , the biography of an artist and explorer.

His autobiography, The Love of Mountains Is Best , was published in 1994. The item "WW2 Mountain Stove RARE Variant ALADDIN 1944 M1942-MOD. Label & Carrier Pot" is in sale since Sunday, November 8, 2020. This item is in the category "Collectibles\Militaria\WW II (1939-45)\Original Period Items\United States\Field Gear, Equipment". The seller is "bataan12213" and is located in Little Rock, Arkansas.