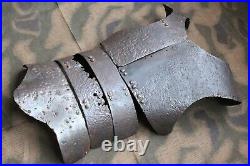 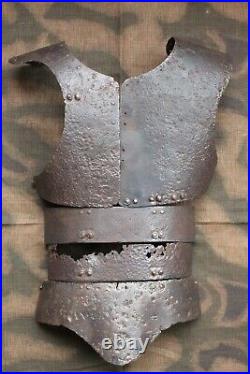 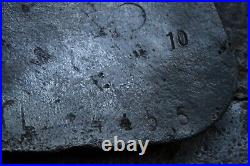 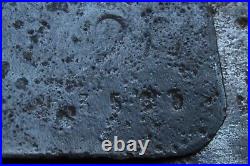 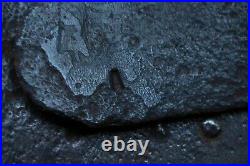 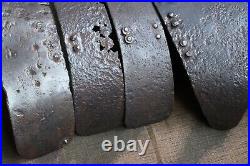 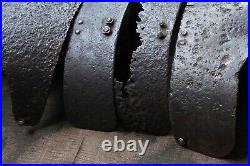 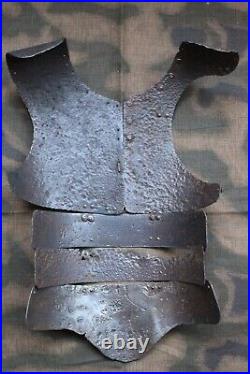 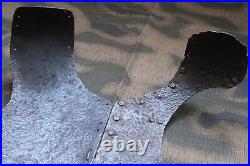 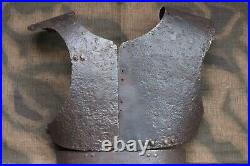 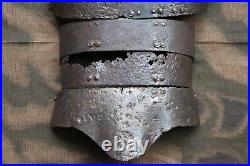 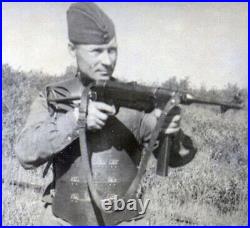 Was found near Narva city. During WWII the idea of body armor seemed obsolete and impractical, let alone expensive. Nevertheless, the Red Army developed a limited number of steel bibs (Stalnoi Nagrudnik). They were issued to the Red Armys assault engineers. The steel bib was capable of stopping a 9 mm bullet with a lead core from a distance of 100150m.

The bullet was a standard caliber for German pistols and submachine guns such as the MP-38/40. The armor was considered reliable enough to sustain a single shot from a 7.92×57mm Mauser rifle, but only if the bullet went on a tangent. Apart from protection against firearms, the bib was designed to repel bayonet attacks and shrapnel. The vest worked well in street fighting and other types of close quarter combat.

By some accounts, captured Soviet steel breastplates came to supply the German army. The Battle of Narva Bridgehead (Estonian: Narva lahingud; German: Schlacht um den Brückenkopf von Narva; Russian: ; 2 February - 26 July 1944) was the campaign that stalled the Soviet Estonian Operation in the surroundings of the town of Narva for six months. It was the first phase of the Battle of Narva campaign fought at the Eastern Front during World War II, the second phase being the Battle of Tannenberg Line. The Battle of Tannenberg Line (German: Die Schlacht um die Tannenbergstellung; Russian: «») or the Battle of the Blue Hills (Estonian: Sinimägede lahing) was a military engagement between the German Army Detachment "Narwa" and the Soviet Leningrad Front. They fought for the strategically important Narva Isthmus from 25 July - 10 August 1944. I'm a digger and I have many Original items for sale! Awards, Tokens, Buckles, Helmets, Edged Weapons, Coins, Personal & Field Gear!

Feel free to ask me any questions! The item "WW2 Original Narva Battlefield Relic. RARE" is in sale since Tuesday, January 26, 2021. This item is in the category "Collectibles\Militaria\WW II (1939-45)\Original Period Items\Germany\Personal, Field Gear".pathfinder" and is located in Europe.