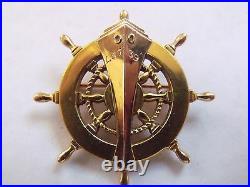 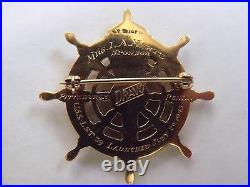 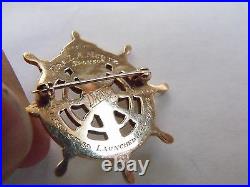 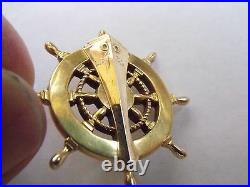 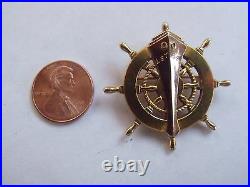 The reverse has elaborate engraving in the style of the time and reads, Mrs. Mertz, Sponsor / DRAVO / Pittsburg Penna / USS L. 39 /Launched July 29, 1943. Hallmarked with 14k, the initials JV and a maker's or assay mark of some kind.

Weighs 16.0 grams on a jewelers scale and measures approximately 1 7/16 across at the widest point. Minor storage marks, fingerprints and a lot of light scratches overall. Launched, 29 July 1943 Delivered and placed in reduced commission, 2 September 1943, for transit to her fitting out yard at New Olreans, LA. Placed in full commissioned as USS LST-39 , 8 September 1943, LT. In command Assigned to the Asiatic-Pacific Theater during World War II but saw no combat action Lost in the accidental explosion of ammunition in West Loch Pearl Harbor, 21 May 1944 Struck from the Naval Register, 25 February 1946 Refloated and converted to a spare parts issue barge, redesignated YF-1079 Placed out of service circa July 1945 to January 1946 Final Disposition, destroyed in 1946.

The seller is "converso" and is located in Pasadena, California. This item can be shipped to United States.