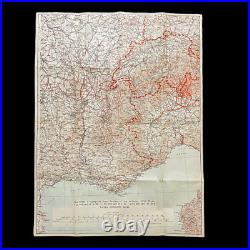 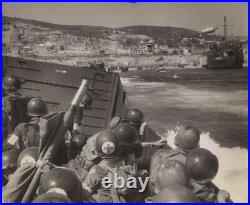 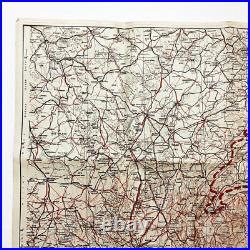 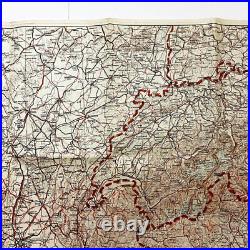 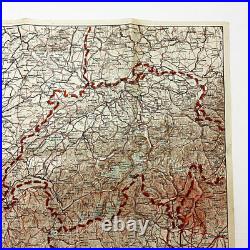 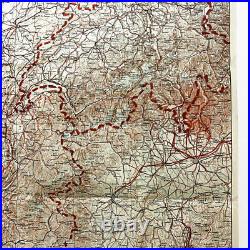 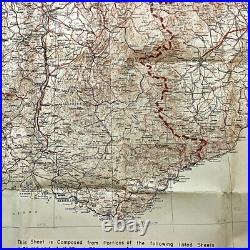 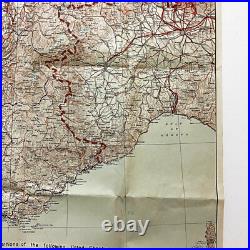 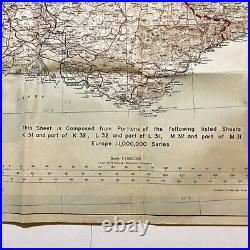 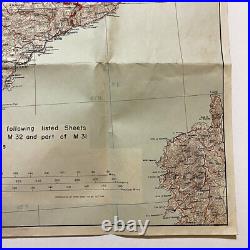 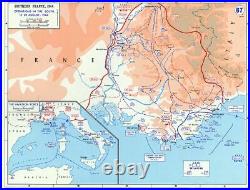 Size: 28 x 22 inches. This original World War II U. Combat sheet was used during the operations of'Operation Dragoon' as the Allies invaded Southern France, also known as the Allied 2nd D-Day. This combat map was produced by the 649th engineer Battalion on October of 1944 (2 months following the initial Allied beach landings).

The war map shows southern France town locations, as well as border markings as seen on the far right side marking surrounding countries such as Italy and Switzerland. This map was intended to be used by infantry soldier's and officer's in the field as a larger map constructed from smaller maps handed out as listed on the bottom legend. The topographical map used in this Allied operation not only shows the French towns but also hill number designation points as Allied forces became to break through German pill boxes and fortification and push the German out of Southern France. Operation Dragoon (initially Operation Anvil) was the code name for the Allied invasion of Southern France on 15 August 1944. The operation was initially planned to be executed in conjunction with Operation Overlord, the Allied landing in the Normandy, but the lack of available resources led to a cancellation of the second landing. By July 1944 the landing was reconsidered, as the clogged-up ports in Normandy did not have the capacity to adequately supply the Allied forces. Concurrently, the French High Command pushed for a revival of the operation that would include large numbers of French troops. As a result, the operation was finally approved in July to be executed in August.

The invasion of southern France under Operation Dragoon aimed to relieve the overwhelming pressure on the Allied logistical systems in the north by securing additional south coast ports and also creating another front to further divert German resources. Following preliminary commando operations and naval bombardment to weaken defenses along the coast, the landings began on 15 August and quickly established three different beachheads. The initial attacks caught the Germans off guard; they were unable to form a sizable counterattack until 16 August, partly due to sabotage of communications by the French Resistance and also a lack of fighting forces. The counterattacks were ineffective against the superior numbers of the Allied invasion force and the official order was given to retreat north by 16 August. Among the invading army were units of the French army who moved to assault the garrisoned forces who had established themselves in the ports of Marseilles and Toulon.